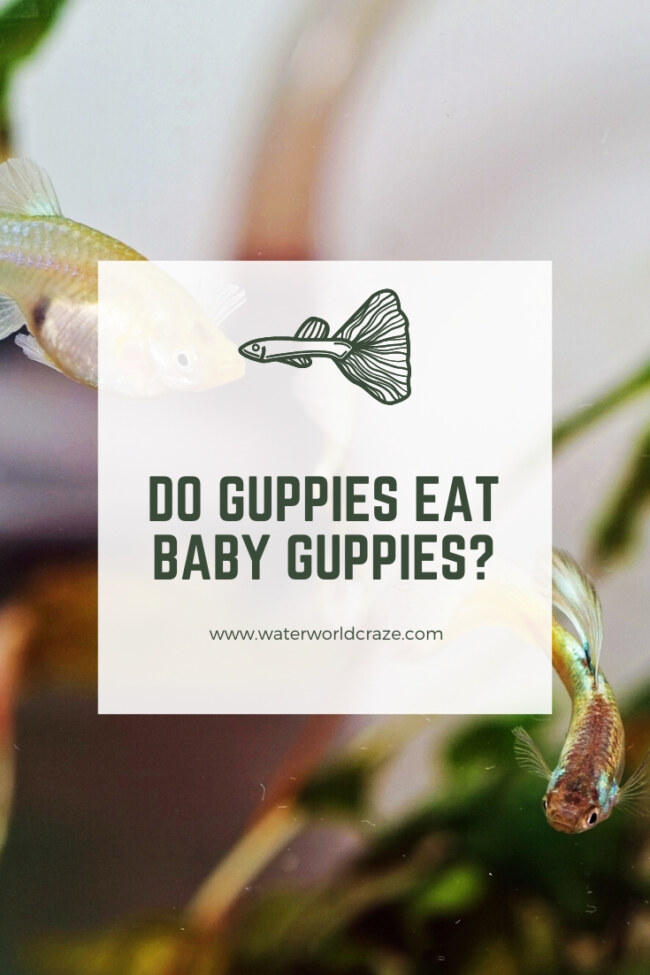 Do guppies eat baby guppies? You might be excited to see guppy babies once the females give birth to them, only to find out that slowly but surely, the babies are nowhere to be found. Did they get eaten? Did they disintegrate? Or were they fated to not be found?

Adult male guppies eat baby guppies. On the other hand, adult female guppies do not eat their fry as they are genetically predisposed not to do so. There are many theories as to why this happens. One theory is that it is instinct. Other theories relate to cause and effect that triggers a response.

This and more will be discussed in this reading. So if you want to know how your baby guppies will survive in just one aquarium, you came to the right place!

We are going to talk about why guppies eat their babies as well as some of the things that you can do in order to prevent this from happening.

Are you ready to give the baby guppies a fighting chance? Then, keep on reading!

Why Do Guppies Eat Baby Guppies?

We have already delivered the bad news and that is—guppies are cannibals. Even though they are one of the easiest fish breeds to take care of, it can be a bit difficult to breed them successfully due to this occurrence.

As mentioned earlier, adult male guppies eat the baby guppies or fry. But why? Are they asserting their dominance? Are the babies annoying them too much that they just end up eating them? We can only come up with several theories as the answer to this is still not set.

Let us take a look at some of the theories.

This so-called spill-over response is said to be brought about by stress factors. What happens is that the present guppies in the aquarium sense that there is a bit of overcrowding in the space they are in. Therefore, in order to “restore” balance, they should get rid of the newcomers.

The balance that they might be thinking about is the fact that from then on, they have to share their food with others, or they have to battle more for food. This is quite ironic is it not? As they will certainly be fed more (by us) as there are new fishes in the tank.

But of course, your guppies will not be able to comprehend this. So, what are these stress factors? One was already mentioned and that is the thing about the food, another one can be the fact that there will be more waste. Further, the space inside the tank.

However, there is still no final word about this theory as it was observed by scientists and researchers that it cannot just be blamed by stress factors. The reason behind this is that, even though there are no stress factors, they still manage to eat the baby guppies. 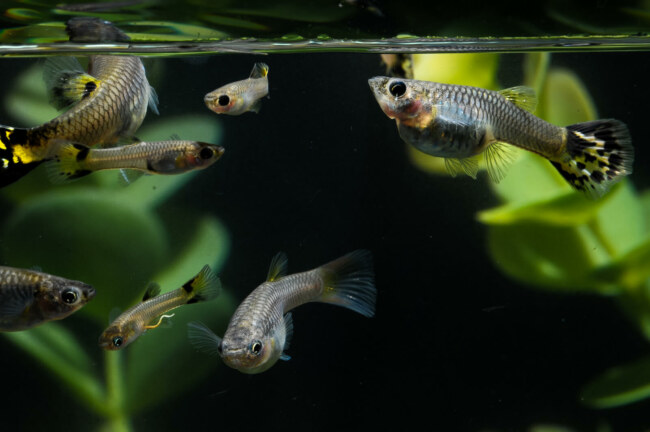 This is the theory that is supported by many. This is where the guppies try to weed out the weaker baby guppies. They just simply know which ones will survive, so they just end the misery of the weak by eating them (pretty dark stuff, if you ask us)

But this behavior is rather philosophical, because to them, this will ensure the survival of the stronger ones as a whole. The stronger ones will not be susceptible to disease and they get to eat the portion of their fallen brother or sister.

They Are Simply Hungry

As guppies do not have the ability to comprehend the essence of family, this results in them, just seeing the babies as food. In the event that you forgot to feed your guppies one day, and a female gives birth, it is more than likely that the baby guppies will perish.

This explanation can also be taken by their experiences in the wild. When they see smaller fish than them, then that immediately means that they will become prey. Definitely, it is a dog eat dog world out there, or in this case, guppy eats guppy world.

Before we make you cringe with our puns, it is also good to note that this is one of the theories as to why adult female guppies eat their fry.

By default, they will not eat their fry, but if they are ravenous and want to replenish their fat storage, then they will not hesitate to do so. You will learn more about this female guppy behavior in the next part.

Do Mother Guppies Eat Their Babies?

Female guppies do not actually lay eggs, instead, they go into labor and deliver live guppy babies. It is extremely rare to see a mother guppy participating in a baby guppy buffet seconds after she has given birth.

The reason behind this is that once they give birth, a chemical will be released from their brains which controls their hunger. This is also the reason why mother guppies tend to go on a fast after giving birth.

Other researchers also found out that even after this chemical has passed, the mother guppy will still refuse to eat the baby guppies, even when she is extremely hungry. So why do some mother guppies eat their babies?

This is due to a genetic defect. More often than not, when a mother guppy does this, then she certainly has this defect. The sad thing is that this defect will be passed on to the female baby guppies that were born. In turn, they too will also eat their baby guppies.

How To Ensure The Survival Of The Baby Guppies

There are three ways on how you can make sure that the baby guppies will not end up in the bellies of their parents. One of the tips that we are going to discuss is highly discouraged by guppy breeders.

Discouraging or not, this will still help the baby guppies survive. We will cross that bridge when we get there. 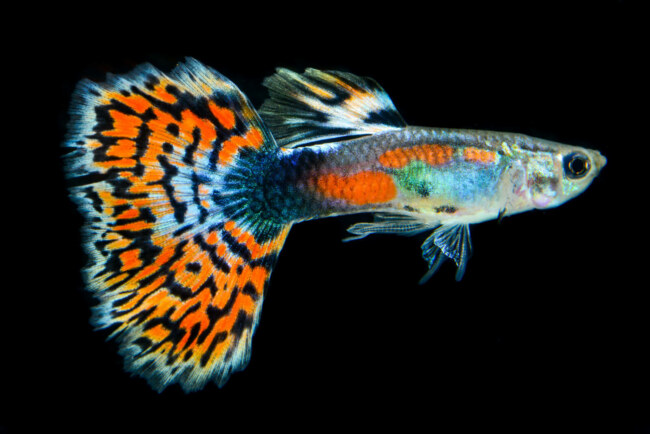 Putting Plants And Other Places To Hide

If you really want to have lots of guppies, then by now, you might already have a big aquarium. If this is the case, then the fix will be easy for you as there is enough space to put in live plants and other accessories like caves or rocks.

If you still have a small aquarium, and you just have to choose between the two, it is better to go with putting in live plants. Doing these things will help baby guppies evade their hungry parents.

Not only do the live plants or caves provide cover for your scared baby guppies, but they will also improve the overall condition of your aquarium. Of course, this fix will not ensure the survival of all baby guppies. Those who cannot swim fast enough to hide will still be eaten.

This fix is not recommended if you want to professionally breed guppies as there will still be casualties.

This is a better alternative to the first fix if you want to ensure the survival of many, if not all of the baby guppies. You can put in a breeding box inside the aquarium. You can simply purchase one or you can create your own.

If you are making one, just keep in mind that the same aquarium water should also flow inside the box and that there is some sort of filter that can take care of the waste. On the other hand, if you want to go the easy way, you can check out this breeding box.

What happens is that you will separate the pregnant guppy and put her inside the box. Once she gives birth, you can then easily separate the baby guppies from her using a sliding compartment.

The baby guppies are still inside the aquarium, but they are separated from the ones who might eat them. This is great as you do not have to manually separate the fry and put them in another tank where you need to adjust the water conditions again.

Word of caution, the baby guppies should not be kept there for a long time (more than two weeks) or it will stunt their growth.

Separation Of The Pregnant Guppy

This is the fix that is a bit controversial to some guppy breeders. This is where you take out the pregnant guppy and place her in a different tank. Why is this controversial?

A lot of breeders claim that doing so will stress the pregnant guppy and she might end up giving birth to unhealthy or even dead guppies.

Another reason is the fact that you should carefully replicate the conditions of the previous tank to the new tank. In the event that it cannot be done, the same will happen—a stressed pregnant guppy.

Further, breeders say that the baby guppies will then have to readjust to the previous tank when you decide to put them back. With that said, for them, it is much better to just leave the baby guppies in their new tank.

With all of that said, this method may be tedious, but it can ensure a 100% survival rate of your baby guppies. So just weigh the pros and cons of this fix. If you are sure that you will do well in adjusting the water conditions of the new tank, then, by all means, go for this one.

We also explain a little more on separating the pregnant guppy from the other guppies in this article.