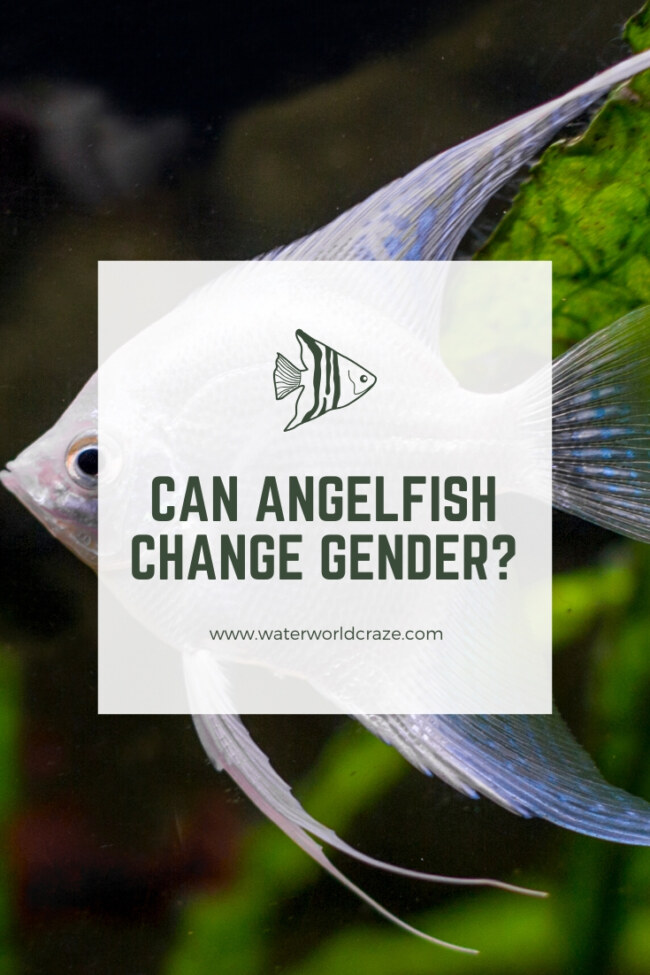 In turn, there are many examples when a female angel turns to be a male or vice versa which can be confusing, to say the least.

I know this is a short answer to an interesting subject, but it will satisfy your curiosity for now. Continue reading if you want to learn how to sex angelfish and what is the best age to distinguish males and females.

Swapping gender is a fairly common thing in the fish world, especially for saltwater species. There are cases of freshwater fish (livebearers) that can change gender, but it’s rare.

The gender-changing thing usually happens when one member of the breeding pair is lost and is more of a marine fish thing.

Freshwater angelfish seldom if ever change their gender. So chances are you won’t witness any gender-swapping in your tank any time soon.

Since female and male angels look the same until maturity, many aquarists make a mistake thinking that they have a male when in fact they have a female or vice versa.

So once a female lays eggs for the first time, gender change is the first thing that comes to mind. When in fact, your angel was always a female and you are stuck with calling her Nemo!

How To Tell The Sex Of An Angelfish?

Telling a difference between a male and female angelfish is much more complicated for novice aquarists. However, even experienced aquarists sometimes have trouble guessing the sex of their angels.

So how can you tell if you got male or female angelfish? Here are some clues that can help:

1. Look For Their Breeding Tubes

Looking at the breeding tubes (papilla) is the simplest method to determine the sex of a freshwater angelfish.

The breeding tube is found on the bottom of every angelfish, just behind the “feeler” fins on their bellies. However, these tubes are very small, so you will have to look closely to even notice them in the first place.

Note, you may have better luck if you catch your angels and place them in the smaller tank for observation.

Once you have located the tube and can observe it properly, pay attention to its size and shape. Male angelfish have pointy and narrow breeding tubes that look a lot like the tip of a sharpened pencil.

Females, on the other hand, have rounder breeding tubes that have a cylindrical shape. At some point, the female angels will lay eggs and need a wider tube to manage the entire process.

Determining the sex of your angelfish will be a lot easier if you look at two or more angelfish at the same time.

2. Check Out Their Appearance

Besides the breeding tube, there are other signs that can help you identify the gender of your angelfish. Your angel’s physical appearance can be very helpful in this regard.

Male angelfish have a high, noticeable crown on the front of their heads. This trait makes the forehead area rounder and more pronounced than in females.

They also grow faster, have fatter bodies, and forked ventral fins. And although males tend to be more robust than female angelfish, this trait might be more prominent in maturity.

On the other hand, female angelfish don’t have a bump on their foreheads and might have rounder bodies than males. Their bodies are generally smaller and their frontal fins are smoother.

Sometimes, you might be able to spot the differences in female angels when they swim towards you. From this angle, you might see that the shape of their bellies is a bit wider and bigger than in males.

Another method that can help you sex your angelfish is observing their behavior. The best time to do it is when they are spawning.

Male angelfish are generally much more territorial and aggressive during breeding. You will probably observe an angel attacking other males and even chasing other species around the tank.

On the other hand, females only become aggressive when they have to protect the fry, but otherwise, they aren’t any more territorial than before.

You can also distinguish males and females by observing their mating rituals.

For example, male angels will fan their fins and shake them slightly in order to attract a mate. The interested female will check out the male, and if she finds him worthy, shake her fins at him in return.

Their mating behavior is actually very similar to fighting behavior. Many people have lost some of their fish because they did not know the differences. That’s why we have created the following articles- we highly recommend reading them!

Your angelfish swimming style can also offer some clues regarding their gender.

Males usually swim keeping their bodies horizontally from mouth to tail. On the other hand, females swim holding their mouths slightly higher than their tails.

What Is The Best Age To Distinguish Male And Female Angelfish?

Before we get your hopes up, you should know that you won’t be able to tell the gender of your angelfish while they are young. At this point, all angels look pretty much the same!

The best time to spot the differences between the genders is when all of your angels are mature. At this time, their bodies are completely developed, thus making the distinguishing traits easier to observe.

At this time their breeding tubes are also fully developed, making this an ideal time for gender identification.

However, angelfish need to have enough space and be properly taken care of in order to reach maturity. And sometimes, even with the proper care and adequate living environment, it might take a longer time for an angel to mature.

Things can be way simpler if you buy your angelfish once they are already mature. This way you don’t have to wait to tell the difference. As an added bonus, the people at the pet store will be able to tell you the gender of the angels you are going to take home.

Once your angels are mature, you will know their genders for sure. If it turns out that you have both males and females, you might want to breed them!

Here are a few breeding tips:

Saltwater Angelfish That Can Change Gender

The process of gender change in saltwater angelfish is called hermaphroditism and always happens for a specific reason. This means that while they have the ability, no angel will change the gender because it simply wishes to become a female or a male.

Let’s look at some examples:

The Rusty Angelfish is known for its beautiful coloration and mostly peaceful personality. Although a saltwater species, this angelfish can thrive in a well-run aquarium and coexist with other angelfish species.

To prove that these angelfish have the ability to change genders, scientists conducted an experiment with two pairs that lived together.

The smaller male that has lost the contest and become a subordinate started to perform female-specific breeding rituals. And over some time, he completely changed his gender to a female.

Once the gender change was complete, this angel started mating with the dominant male, like all angelfish normally do.

Ultimately, this experiment showed that Rusty Angelfish can swap genders when the situation requires it.

The Blackspot Angelfish live in groups of one male and four females. The male angelfish is blue and has black stripes and all the females are yellow.

The male angelfish is the largest and strongest member of the group and acts as a protector and looks after the female angels. However, when the male dies in the line of duty, the group needs a new guardian.

In time, her behavior towards other females starts to change. She begins acting like a male and protecting the rest of the group.

After two weeks the female gets black stripes over her body which marks the end of change and signifies that the angel is truly a male.

Although they have the ability, the Blackspot Angelfish also go through a gender change only in specific situations.