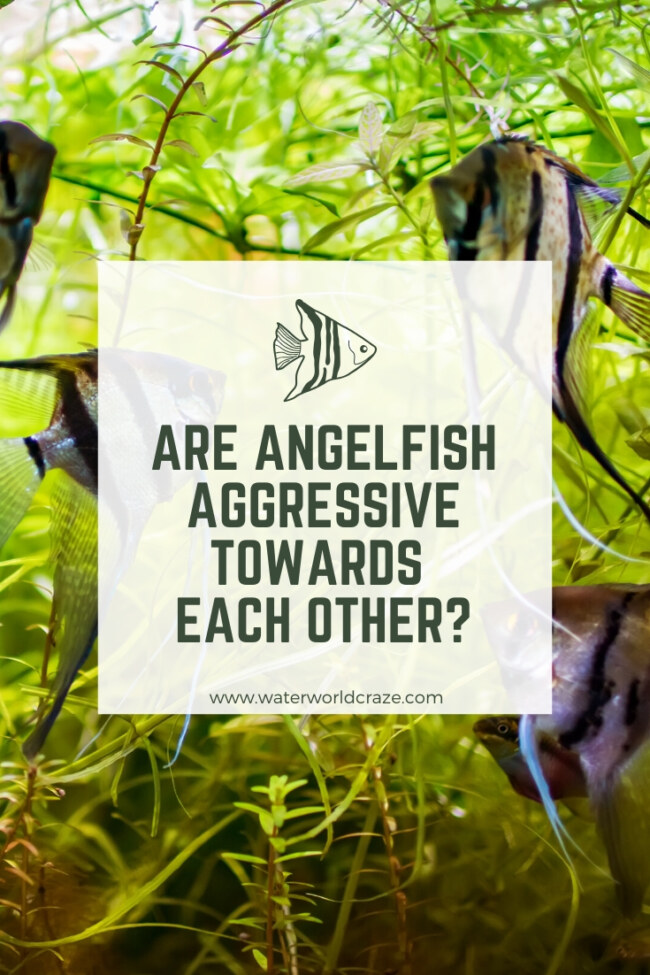 The large size, range of colors, and unique shape have made the angelfish one the most popular elements of freshwater aquariums. But while gorgeous, angels are members of the cichlid family and may bully other fish in your tank at some point.

But, are angelfish aggressive towards each other? While less aggressive than other cichlids, angels are not peaceful and love to pick at each other. Angelfish can become aggressive for several different reasons, such as the size of the tank, lack of hiding space, dominance issues, and current patterns among other things.

While this is a rather short answer, it should give you an idea of why angels can be aggressive towards each other. Continue reading to learn all factors that can lead to aggression and what you can do to prevent and/or stop it.

Why Are Angelfish Aggressive Towards Each Other?

Angelfish aren’t so aggressive as other members of the cichlids family, but they can bully and fight with other angels in the aquarium. Most common reasons for this pesky behavior are:

Like most cichlids, a male angelfish sees the aquarium as “his” space. When several angelfish are introduced together they usually establish a pecking order, with the dominant male and subordinates.

Depending on the temperament, the dominant male will tolerate the other angels, or become aggressive towards them.

When a single male angelfish is placed in the aquarium he usually establishes it as his own territory. Hence, when other angles are later introduced he may or may not tolerate them.

Dominant males usually tolerate female angels, but that may not always be the case. On the other hand, males are rarely tolerated as the dominant angel sees them as intruders into his own space.

In some cases, the aggression is simple bullying, like pushing and shoving, but it can also become very physical.

The subordinate angel may be killed outright, or it may be highly stressed or frightened. The latter usually leads to a subordinate’s death sooner or later.

When angelfish fight, it looks like they are kissing. However, kissing behavior is also part of a mating ritual. To tell the difference, we highly recommend reading our two following articles:

Angels tend to get aggressive if there are only two of them in the aquarium, especially if both of them are males.

They are less aggressive and thrive when they are in pairs or groups. Once in a group, a pecking order will be established and a dominant male may bully all other fish just a little bit.

Consequently, none of your angels will become stressed out, since a small amount of bullying is natural group behavior.  However, when there are only two males, the dominant has just one option, leaving the other fish stressed out and cowering in fear.

If you are not sure what gender you angelfish have, let us help you! Read our article on that here: Can angelfish change gender? 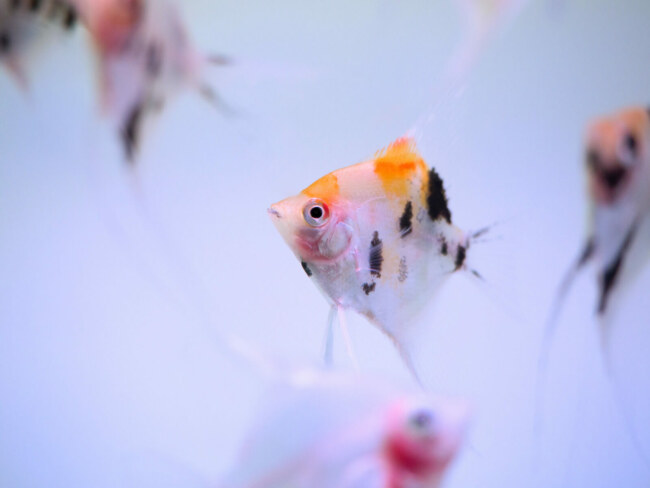 Angelfish tend to be quite shy and like to have a lot of hiding places that will protect them when being picked on by other tank members.

When there are no plants, driftwood, or decorations to break up their line of sight, angels can become aggressive and bully one another. Hence, it is essential to provide adequate space and an ideal environment to prevent bullying from occurring.

Angelfish can grow quite large and need a big enough tank in order to stay happy and thrive.

Generally, anything smaller than a 10-gallon tank isn’t a good option for a single angelfish. However, if you have two angels you will need at least a 30-gallon tank so they can have enough room to pair and live comfortably once they reach their adult size.

When crammed in a small tank, angels can become aggressive and will bully one another for the extra space and territory.

Keep in mind that the tank should be tall, and not long, so that all of your angels have enough room to move around without having to fight one another for extra space.

It’s not uncommon for a pair of angelfish to fight and chase one another before and after spawning.

In this case, you will notice that your angels are locking lips, flicking their fins to look bigger, chasing, and nipping each other.

Once they are ready to spawn, angels select, clean, and defend a relatively flat surface to deposit the eggs. Furthermore, after the breeding, angelfish will guard and defend their eggs and will be aggressive towards other fish, including other angels.

How To Stop Angelfish From Fighting?

Even when kept in ideal conditions your angels can get into occasional fights. But this is nothing to worry about, and your angelfish will soon enough hash it out among each other.

However, there are things you can do to minimize aggressive behavior and to ensure that your angels have an ideal living environment to be comfortable in and thrive. 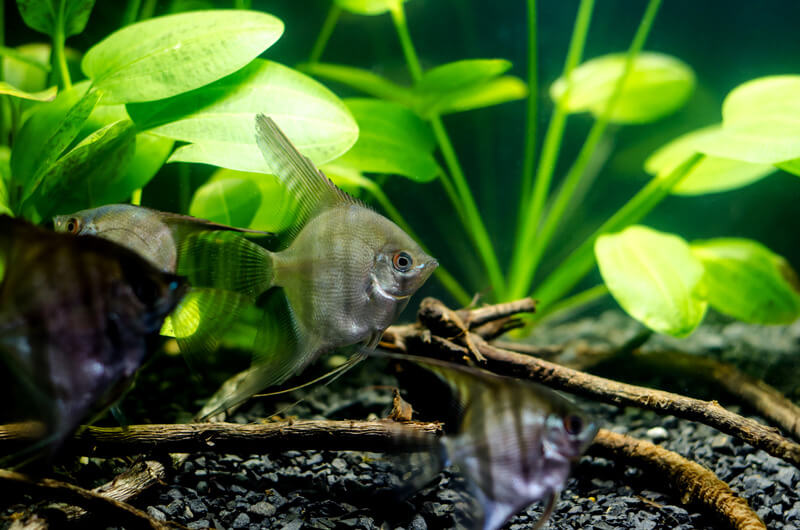 Angels are very territorial and tend to be aggressive if you decide to add newcomers to their tank.

So if you think that having just one angelfish won’t be enough, you should get a pair (male and female) or a group straight away. This way, you will give them a chance to establish a pecking order and form a group right from the start.

However, if you already have one angel and want to add another to the tank, it is best to take the dominant one out of the tank and place it in another for a couple of days. During that time, rearrange the décor and put the bully back in with the new fish to avoid any fighting.

Angels thrive in environments with a lot of plants and caves that can serve as hiding places, otherwise, they will fight and bully one another for territory.

To stop the fighting, use tall plants, driftwood, rocks, glass, and decoration to design hiding places and private areas for your angels.

Besides helping your angels to get along, these accessories will also make your tank aesthetically more appealing and mimic the angels’ natural environment.

3. Get A Larger Tank

Aggression is more common among adult angelfish, and when in cramped space this bickering can lead to death. Sometimes, even a 90-gallon tank isn’t enough when you have two male angels fighting for territory.

So, providing the right size tank for your angelfish is essential if you want to prevent fighting and to keep them content. Generally, a 20-gallon tank is enough for one angel, but that number rises as you add more fish to the group.

Angelfish communicate their social status through urine and bile that they release into the water. While keeping the tanks clean is important, changing the water often will disrupt chemical signals from the water.

Hence, making the angels blind to their social hierarchy and more aggressive towards each other. However, the attacks will stop once the chemical signals are back to normal which usually happens during the next day.

5. Keep The Current To A Minimum

A good filtration system is a must if you want to keep your aquarium clean. However, you will have to look for one that doesn’t create excessive currents in the water.

This is mainly because angelfish aren’t the most agile swimmers and a strong current can make them stressed out and more aggressive towards each other.