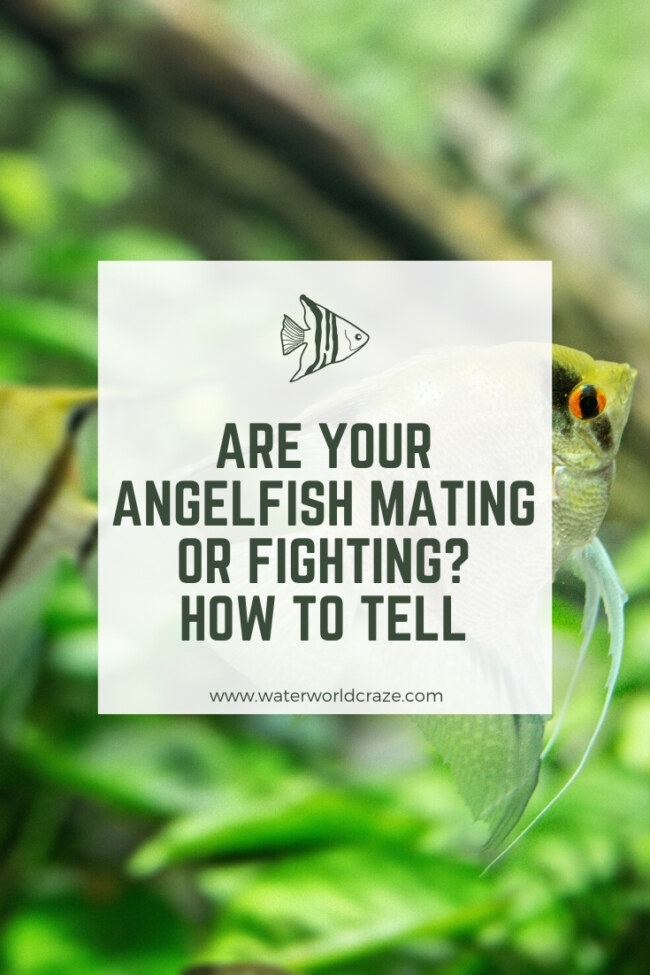 Angelfish are popular freshwater fish that many people enjoy having. Well-known for their beautiful appearance, these fish have interesting personalities and curious tendencies.

One thing that many people notice is that these fish are aggressive eaters, but they may also display aggressive behavior toward each other. But angelfish are notorious for having rather violent mating rituals, too. So this might cause people to wonder: are my angelfish fighting or mating?

If you know the sex of your angelfish, it will be easier to determine. Behaviors such as locking lips and following one another are typically signs of mating. But if you notice that they’re chasing each other, nipping one another, or flicking each other with their tails, this might be signs of fighting.

It might be difficult to distinguish between whether your angelfish are mating or fighting, so we will discuss some ways that will allow you to tell the difference, as well as what typical mating and fighting behaviors are.

It is actually a bit difficult to be able to notice whether your angelfish are male or female. This is not something that many people- including breeders- realize until their angelfish start to lay eggs.

In general, you can use these guidelines to see what the sex of your angelfish is.

By nature, female angelfish are less territorial than male fish. They have a wider sexual organ, which is known as the papilla. You will be able to see the eggs that are in the papilla if you watch your fish closely throughout the day.

It is also possible for you to see the female fish lay her eggs. She and the male fish decide upon a place in the tank for the eggs to be laid, which is where she will lay the eggs in perfect, straight lines.

A male fish is naturally going to be more territorial and you might also notice that it has a tiny bump on its nose. The sexual organ- the papilla- has a pointier shape and you will not be able to see it at any time other than when the male is preparing to fertilize the eggs.

Males work to fertilize the eggs that the females laid, so if you see your fish doing this, then you know that you have a male on your hands.

So if you find that you have male and female angelfish, you might notice strange behaviors that will resemble mating. Note that female angelfish find a place in the tank to lay eggs, and then they do so in perfect lines.

The male angelfish follows close behind, fertilizing these eggs as they go.

You might notice that your female angelfish’s belly has gotten larger and that she has become more aggressive. It is also possible to see that your angelfish are grooming each other and flashing their fins.

One thing that many fish owners tend to notice as well is that their angelfish will twist around while locking their mouths together. This is not anything to worry about and is completely normal behavior for these fish.

And finally, once a female and male angelfish have gotten close to one another, they will choose a spot in the tank for their mating site and begin to clean it. This is where the female will lay eggs.

The main reason why angelfish fight is over territory. This is especially the case if you have more than one fish of the same sex in the tank. Just like many other animals, these fish want to establish their dominance, especially among members of the opposite sex.

They do not want the other fish to “invade” their space and “steal” their mate- although angelfish do not keep the same mate for life.

If you have two angelfish that are mating, they might also become territorial for the same reason- because they do not want the other fish to invade their private space.

Here are some different behaviors that your angelfish might exhibit if they are fighting with each other.

Many owners note that their angelfish tend to get very violent. If you’re worried about the safety of your fish, you could always try to separate them. It isn’t recommended that you keep too many angelfish together in the same tank at once because of their territorial nature.

But usually, these fights are over quickly and they don’t happen too often. Be sure to monitor the behavior of your fish if you’re worried about what might happen.

But they don’t usually kill or severely maim each other; the entire purpose is to make sure that the other fish knows its place. The video below shows two males fighting.

How to Know the Difference

Again, angelfish have rather aggressive mating rituals that are similar to the way they fight. This is definitely a cause of worry among many people because you obviously don’t want your angelfish to hurt each other.

So what’s the best way to tell the difference between these behaviors? Here is some of the best advice that fish owners have given.

Monitor their behavior closely for long periods of time

If the fish are fighting, they will tend to leave each other alone, but if they’re mating, you will typically see them together or with their eggs. Fertilized eggs are clear and unfertilized eggs are white in color.

Determine the sex of your fish

This might be a bit difficult because sometimes, even the most experienced breeders have trouble determining the sex of their fish. We mentioned in a previous section some of the ways in which you can try to tell.

This will make things easier in trying to decide whether they’re fighting or mating. Fish of the opposite sex will be mating, and fish of the same sex will fight for dominance.

We show you here how you can tell whether your angelfish is male or female, and we answer the question if angelfish are able to change gender.

Is it possible to keep more than one angelfish?

It is typically fine if you have more than one angelfish, and it does not matter what sex they are. The most important thing is that you make sure the tank is large enough to be able to accommodate them.

Why are my angelfish chasing one another?

Angelfish are territorial fish and they may be chasing each other away to get the other fish out of their territory. This is especially the case if the fish are of the same sex, because they want to ensure that the other fish doesn’t steal their mate and also so that their genes will get passed on.

Do angelfish have the same mate for life?

No. Every mating season, an angelfish will find the other fish it wants to mate with and it will stick with that fish for the season. But it is normal to see two different angelfish with each other during the next season. They do not have the same mate unless there is a lack of options.