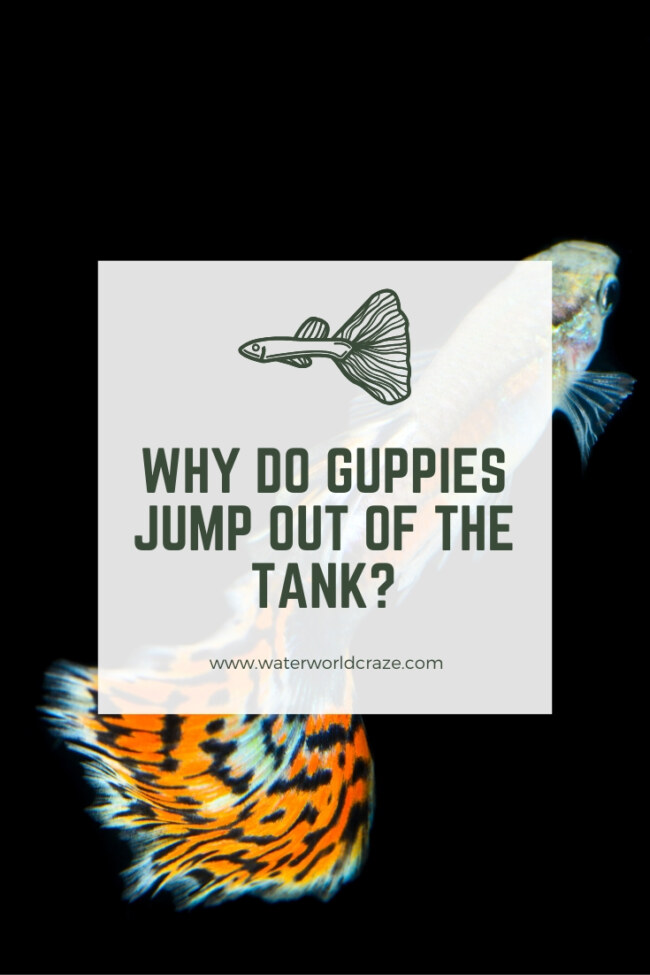 A lot of guppy owners know that there should always be some type of cover at the top of the tank as these fishes tend to jump out of the tank. Which may lead you to think, why do guppies jump out of the tank? Do they have a feeling that they are still in their tropical rivers? Is this behavior normal?

A study by a marine biologist, Daphne Soares revealed that guppies jump out of their tanks is a strategy of dispersal. They do this so competition is lessened for food, prevention of inbreeding, and evasion from predators. Even in a secure tank, something in the guppies’ DNA prompts them to do this.

The mentioned study is the closest answer as to why guppies jump out of their tanks. Sadly, this conclusion somehow defeats the other reasons by guppy breeders. But of course, as we do not like to leave anything to chance, we are also going to discuss the other reasons in this article.

So keep on reading to know why your guppies are partaking in a suicide mission and how you can prevent this from happening.

Why Guppies Jump Out Of Their Tank: The Reasons

As we have mentioned earlier, the recent study of a marine biologist, Daphne Soares is the closest explanation as to why this behavior is happening. The problem is, her conclusion alienated the other reasons by several breeders.

Does this mean that the other reasons are wrong? Not necessarily. The other reasons can be connected to her conclusion which you will see later on. For the benefit of discussion as well as covering all possible aspects of the said behavior, we are going to discuss them all.

So keep an open mind as some of the reasons are really observed and proven by breeders. Further, their corresponding solutions are directly related to their reasons. Let us now take a look at them.

This is the conclusion of the study Daphne Soares. To discuss the study briefly, she did experiments in controlled and natural guppy environments.

She was able to find out that even guppies in the controlled environment still jump out of their tanks even when some of the factors in the real world are not present.

These factors are predators, search for food, overpopulation, and the like. This is the reason why she concluded that the behavior is just a matter of dispersal.

In other words, the guppies just have this need to constantly disperse even when the situations in their tank is at the optimum level.

She further concluded that this behavior might have deeply embedded in the guppy’s way of life, even with the ones that were already bred in the aquarium. So definitely, at one point in time, they will just keep on jumping out of the tank for the sake of doing it.

As you see by now, this explanation may lead you to think that no matter what you do in the tank, your guppies will just keep on jumping out. So it is as if, you cannot do anything about it and just be always on the lookout for guppies on the floor.

However, the study also accounts for the fact that there are still environmental factors that may or may not contribute to this jumping behavior. This is why we should also discuss other reasons, as they are also big possibilities.

This reason is not just for guppies, but this is also the reason as to why other fishes jump out of their tank. In the wild, they can have all the space that they can get, but in the tank, it can get pretty crowded.

Even though guppies do not grow as large as other fishes, they still need ample space for swimming. As they are small, some think that housing them in small aquariums are enough, but the smallest recommended tank size for guppies should be at least 10 gallons.

With this minimum requirement, you can house at least five to eight guppies. Keep in mind that housing several guppies in a small tank bring them discomfort. This is the case as there will be a lack of oxygen as well as the existence of excess waste.

Moreover, having a small aquarium makes it easy for the water parameters to be inconsistent as they can easily change. Therefore, you cannot leave your tank running for a week, without tweaking the conditions of the water.

It is also a given that guppies can breed easily, thus it can get overcrowded easily. So having a big tank from the get-go will help a lot. In this article, we show you how big your tank should be at least – Read it here!

When it comes to guppies, a variety of stressors will surely push them to abandon their tank. But before they do so, you can see other behavioral changes. An example of this is that they are staying at the bottom of the aquarium or they are always hiding in plants or caves.

Some of the things that contribute to this stress are bullying, lack of oxygen, overcrowding, aggressive males, pregnant females, and many more. You should always be on the lookout for these stressors as guppies that are stressed are prone to diseases and even death.

Other symptoms of stress are color fading, problems with breeding, and loss of appetite. It is also good to note that in the study of Daphne Soares, she stressed that stress is not the likely reason for this jumping behavior.

The reason for this is that she found out that guppies who live in a tank where the said stressors are not present still managed to jump out of the tank.

On the other hand, guppies who lived in a tank where there are these certain stressors have a higher and quicker ratio of jumping out. Therefore, we still cannot rule out this reason.

This reason is more of a trigger to stress. Of course, just like humans, if we keep on living in a cluttered, dirty, and smelly environment, we will go nuts, right? The same goes for your guppies.

It is just that, in our case, we can easily clean up, but for them, they would rather abandon ship (or in this case, abandon their tank) This is a purely natural reaction brought about by their survival instincts.

It is also important to know that guppies do not do well when it comes to temperature fluctuations. They will easily become stressed and eventually, they will become sick.

This is the reason that you are left with when your guppies are not stressed, the water conditions of the tank are great, and they are not overcrowded. This is also closely related to the conclusion of Daphne Soares and that is, they simply just want to move to a different place.

As Soares observed, the jumping behavior that they do is definitely deliberate so it is just a way for them to get away from their present environment, and simply move on. At the same time, this can also be related to the fact that they do not have enough enrichment in their tank.

When the male guppies get tired of chasing females, and when the females get tired of foraging, what is left do besides breed? It is time to pack their bags and jump out. This goes to show that there should be an abundance of other things to do in the tank.

What You Can Do

Now that you are caught up on the possible reasons as to why your guppies are jumping out of their tanks, let us now go over some of the things that can help deter this behavior.

If you have an overpopulation or overcrowding problem, then creating a solution at its root should be the priority. First off, you can simply transfer some of the guppies in a different tank or you can put them in a bigger tank.

Further, you can also try to not mix genders in one tank. On the other hand, if you are not interested in breeding your guppies, you can also mix other fish like female betta so that she can feed on the fry.

The recommended temperature range for guppies is between 72-82 degrees Fahrenheit or 22-28 degrees Celcius. Of course, you should not only concentrate on the temperature, but also the water parameters. Is there enough oxygen? Are carbon dioxide levels too high?

Going back to the temperature, you should be sure that you always adjust them especially if you live in a place that has inconsistent temperature depending on the seasons. A good solution to this is having an aquarium heater.

In this way, you do not have to constantly measure the temperature, instead, you just have to tweak the settings of the heater and it can conveniently maintain the right temperature.

You can check out this aquarium heater. This heater is extremely durable and can be used in big tanks that can hold up to 15 gallons. In this way, you do not have to change your heater in the event that you decide to switch to a bigger tank.

More than using a heater, you should also make sure that the other tank equipment is in good condition.

These are the air pump, aquarium filter, and live plants. For live plants, you should immediately replace or remove the plants that are dying as that causes an imbalance in the water condition because dead plants release chemicals such as ammonia.

Further, you should also be on top of your water changes. Of course, you can gauge whether or not you should replace the water based on how clean your aquarium is. But it is recommended to do a water change every other week.

You should also read our following articles:

Put A Weighted Cover On Top Of The Aquarium

This is in relation to the conclusion of Daphne Soares that no matter what you do, your guppies will still try to jump out of the tank. In this case, you are just preventing them from having a successful jump.

So just make sure that you have a cover on top of your aquarium that can keep them from jumping out.

A secure mesh will do as this will also lessen the chances of hurting your guppies when they attempt their jumps. However, breeders who used glass also observed that this will not injure your guppies.