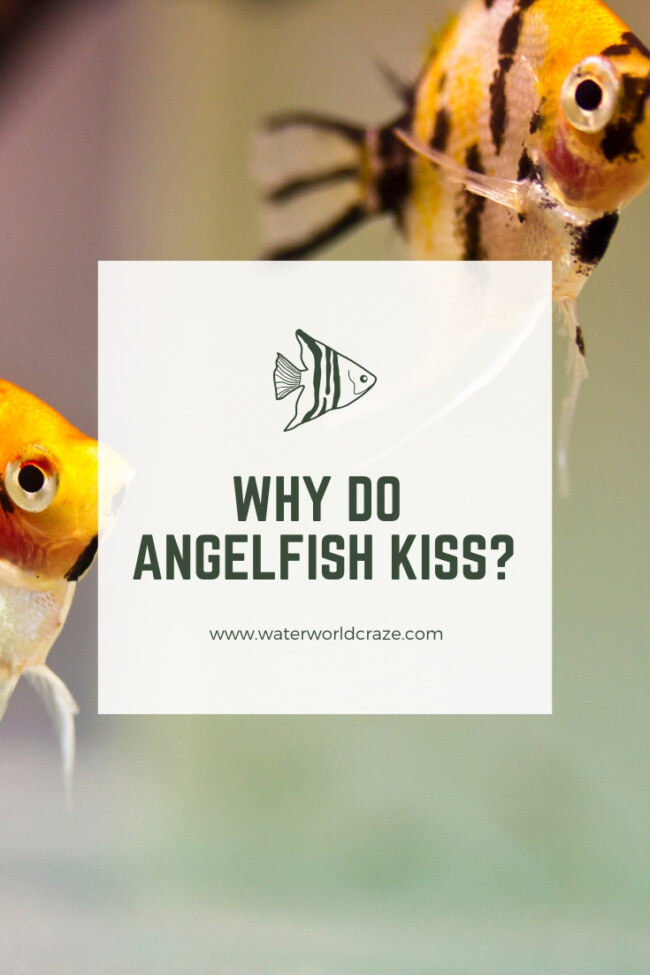 Angelfish are known for being calm pets. Many people enjoy keeping them because they are easy to take care of and their behavior is predictable.

But sometimes, you might notice that your angelfish is displaying strange behavior, which might lead you to worry. One behavior that many people worry about is when they lock lips, or “kiss.”

Angelfish locking lips is a behavior that worries many people, but it’s actually normal, especially if they’re mating. This is a typical behavior they display when they pair off with a mate. It is also possible that your angelfish are fighting each other for dominance. The best way to find out is to monitor their behavior.

In this article, we will talk about kissing and some other common behaviors that angelfish display when looking for a mate, as well as what you should look for and why you should monitor their behavior to determine the reason why your angelfish are kissing.

If you see that your angelfish are locking lips and twisting around- which many angelfish owners refer to as “kissing”- it doesn’t necessarily mean that you should start worrying about whether or not something is wrong with your fish.

This is a behavior that many fish will display at some point. But it is also important to know that this is one of the many typical mating behaviors for an angelfish.

How will you know if your angelfish are mating, aside from kissing?

You will notice that your female angelfish have started to display more aggressive behavior when the mating season is near, which is not typical behavior for a female fish. It’s also possible to see your angelfish grooming each other or finding a site that would be perfect for laying eggs.

Again, even though locking lips and twisting around is a completely normal behavior for mating angelfish, it might not be the reason why they’re doing so.

Another reason why angelfish “kiss” is because they are fighting. This will be the case if your angelfish are of the same sex. If your fish are fighting, it is generally due to the fact that they are fighting over their territory and want to make sure that the other fish don’t steal their mate.

As with many animals, angelfish want to make sure that they have the most mates for breeding so that their genes will get passed on.

When an angelfish finds its mate, you will find them locking lips. Other angelfish that are of the same sex are seen as a threat to this.

The only way for you to know for sure whether or not this will apply to your angelfish is to monitor their behavior and see what kinds of behavior they are displaying aside from the lip-locking.

Determining Why Your Angelfish Are Locking Lips

One thing that many people have noticed is the fact that lip-locking is a common mating and fighting behavior that angelfish display. So, it might be difficult to determine what they’re doing.

Again, the best way for you to be able to see what your angelfish are doing and why they’re locking lips is to monitor their behavior for a set period of time. There are some things you can do in the meantime, though, to see if those are causes for their “unusual” behavior.

Is your tank the right size?

Since angelfish are naturally territorial fish, making sure that the tank is big enough to suit them is an important first step, and something you should do even before you get any angelfish.

Yes, you can keep more than one angelfish in the same tank, so long as the tank is big enough for them to have their personal space. You should be looking to have at least a 30-gallon tank. If you suspect that the tank might be an issue, try getting a bigger one and seeing what happens.

Are your angelfish male or female?

Determining the sex will really help you in figuring out whether the lip-locking behavior is a sign of mating or fighting, but this can be rather difficult. Sometimes, even the experts have difficulty in determining whether or not an angelfish is male or female.

You can always ask a specialist for help if you can’t figure it out or you can read our article on the differences between male and female angelfish here (with pictures)!

Do they seem to chase each other?

Watching what your angelfish do after they display the lip-locking behavior is also important. As we mentioned above, a female angelfish will puff out her belly and become aggressive toward angelfish of the same sex, as will the male.

You will also see the male and the female together trying to find the perfect spot for the female to lay her eggs. But if they’re fighting, the angelfish will typically chase each other and avoid each other. 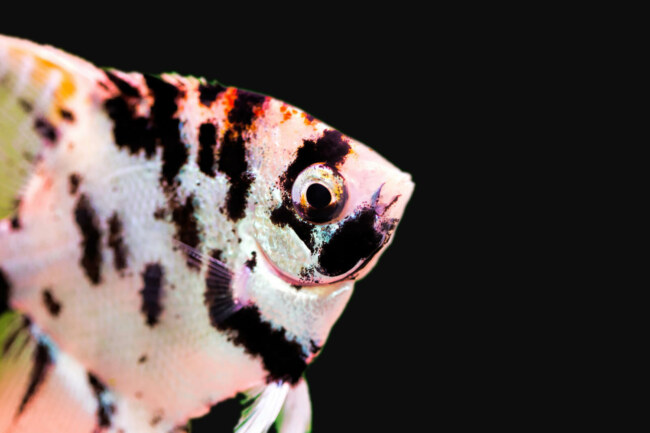 Check to see if there are eggs

It might be difficult to see the eggs, and some people even said that they were unable to find the eggs in their fish tank.

But keep in mind that part of the mating ritual includes finding a safe place to clean for the female to lay eggs, so it’s worth looking for spots in the tank that look particularly dug out and clean.

If the eggs are not fertilized, they will be easier to see because those eggs will eventually turn white and opaque. But fertilized eggs might be a little bit more difficult because they’re clear in color.

Overall, you should keep an eye on your angelfish for at least a week or so in order to get a better picture of where their lip-locking behavior is coming from. If you find that it’s a result of mating, then there is nothing else that you need to do.

If they’re fighting, it’s also possible that you don’t need to do anything because angelfish do tend to get territorial and fight from time to time. The reason why they are locking lips will become evident when you examine and monitor their behavior.

Separate the fish when the fighting doesn’t stop and one fish clearly gets bullied.

Double-check the food that you’re giving them, whether they have enough room for privacy, and if the tank is big enough. These factors play a major role in the overall relationship that your angelfish have with each other.

Can I keep two angelfish of the same sex in one tank?

You will typically not have any issues if you wish to keep two angelfish of the same sex in one tank. The most important thing is to make sure that the tank is big enough for both fish to have their own personal space to avoid any potential fights.

Can a female angelfish produce eggs without the male?

Your female angelfish will produce eggs even if she does not have a male mate, but these eggs will not be fertilized and will eventually turn opaque. A male angelfish would fertilize the eggs, which would make them transparent and lead to guppies.

How do I know when my angelfish are mating?

If you pay attention to your angelfish’s behavior for some period of time, it will be evident when they are mating. You will see the female fish having a bulging belly and displaying aggressive behavior. If you see your male angelfish grooming one another, this is also a sign that they’re ready to mate.

Once again, lip-locking is not something you should typically worry about, but it could be a sign of either mating or fighting. Monitoring your fish is the best way to distinguish and determine your next course of action, if applicable.