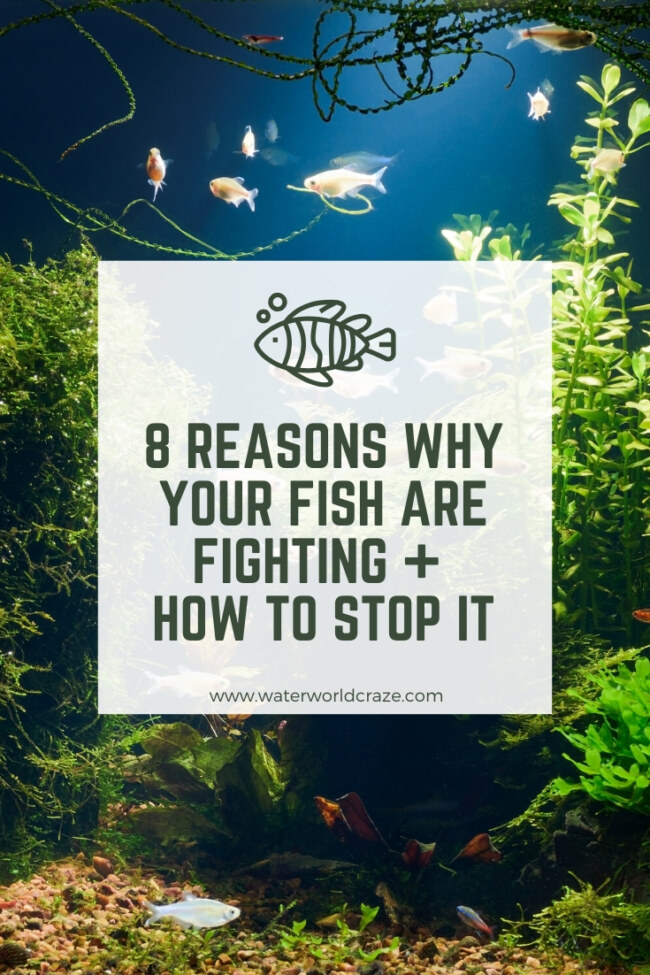 Some fishkeepers love to see their fish thriving in harmony, then there are some who love to see their turning into a Roman colosseum! If you don’t fall into the latter category, you might be worried about your fish fighting or eating each other off. Good thing that we have the answer to that!

Why are my fish fighting? The sudden aggression among the fish can have various reasons – territorial fights, too many male fish living together, mating season tension, stress, scarcity of food, or natural aggression of the fish.

These are only the major reasons behind your fish being aggressive. There are a number of other secondary reasons. Polluted water, non-compatible tank mates, overcrowded tanks, the unsuitable water temperature can be the culprit too.

However, things can be deceiving at times. You might think that they are fighting, whereas they are actually playing together. So, you need to understand the difference.

8 Probable Reasons Your Fish are Fighting

Not all the fish are calm in nature. Some fish have the aggression coded into their DNA. Think of the breeds like Piranhas or African Cichlids.

These fish will obviously fight. If they don’t fight, then you should worry!

So, before seeking an answer, ask yourself, if you are keeping any breed that should fight naturally.

A lot of wild animals like tigers, wolves, and hippos tend to be territorial. The same can be said about a lot of fish.

As you are keeping them in a confined space in an aquarium, they can turn against other fish for the sake of territorial defense.

Cichlids, Tetras, Barbs, Goldfish are some of the common territorial fish. Maintaining and defending territory is the crucial trait of these fish.

So, it’s very common for them to attack other fish entering their territory of the tank.

If there are more male fish compared to females in the tank, things can take a bad turn.

The male fish can fight other males to show dominance and strength so that the females see the male as a better mating partner.

Such clashes are even more common during the mating season. So, you should be aware of the male fish fighting and take the necessary steps.

On the other hand, if there are more male fish in the tank compared to the females, they can even attack the females during mating season.

As a fishkeeper, you should always keep a keen eye at the temperature of the tank.

For example, Betta fish or Tiger Barbs are tropical fish that prefer being in the 78°F sweet spot. In winter, the temperature can go way below that point if you don’t have a heater in the aquarium.

The colder water temperature can make them stressed, and they tend to behave aggressively, leading to fights.

The same can be said about the pH level in the water too!

So, we would suggest you keeping separate thermometer and thermostat so that you can maintain the tank temperature at a constant level.

Toxins in the Water

Are you familiar with the vicious nitrogen cycle in an aquarium? Well, this is an inevitable cycle that you need to be prepared to handle.

When fish poop, the fecal wastes turn into ammonia, nitrites, and nitrates in different stages of the nitrogen cycle.

The same can be said about other kinds of rotten elements like dead leaves, plants, and dead fish.

If you don’t change the water periodically, the water contamination stresses the fish badly. In many cases, stress makes the fish aggressive.

Are the Tank Mates Compatible with Each Other?

Okay, here’s a simple fact most of the new fishkeepers tend to forget while designing the aquarium – they don’t plan out the fish compatibility issue.

Not every fish can live happily together. This is even truer with the carnivorous fish. It’s only normal for the “rival fish” to fight against each other.

For example, you can’t keep guppies and Koi together in a tank. Koi will definitely bully the smaller guppies.

On the other hand, guppies and bettas will live happily without having any quarrel.

Do the Fish have Enough Food?

Food scarcity can change the nature of many fish. The omnivore fish will attack other small fish for food if they can’t find enough food for survival.

For example, Koi will eat minnows and guppies if they can’t find other food sources. So, never leave your fish unfed or neglect their natural eating habit.

Having Too many Fish in a Small Tank?

You need to give enough roaming space for the fish in a tank. You should never stuff up your aquarium with too many.

Even if the fish are not territorial or naturally aggressive, they will attack each other to gain enough space for swimming freely.

For example, Koi will need at least 50 gallons of water for every fish. You can keep the young ones in a 30-gallon tank but not smaller than that. 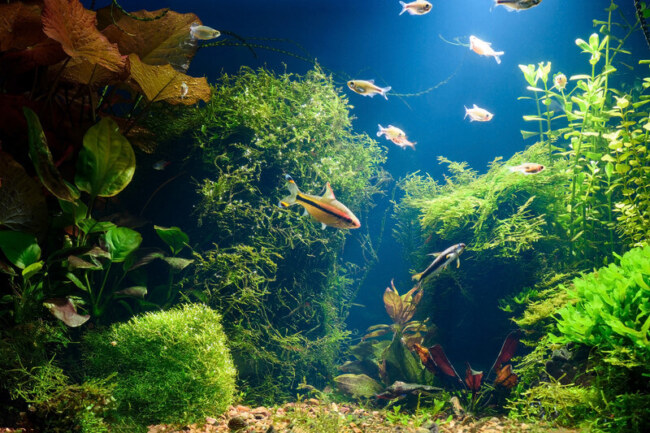 Are the Fish Fighting or Playing? Understand the Difference!

Suppose, one day, you see one of your fish, chasing after another one. You might instantly think that they are fighting each other.

Hold on, that might not be the only case!

Fish can chase each other normally, often it is an act of playing together. Some fish socialize, some tend to show their affection with partners in such a manner.

Think of such an act as the mating behavior of the dogs.

Mating dog couples often wrestle with each other before mating. But it’s nothing more than a mating ritual.

So, how can you differentiate between typical playfulness and acts of aggression?

If one of the fish is being attacked, you will see the following incidents:

These are the only two normal parameters. Still, you should consult with a vet or an expert to be sure of the situation.

How Can You Prevent the Fish from Fighting?

Okay, now that you know about the probable reasons behind fish fighting each other, you need to know what could help in such a situation.

Here are some of the possible solutions that might do the trick for you:

Try to separate the breed of fish, which are naturally aggressive.

It’s best to keep them in separate tanks altogether. While planning out your aquarium design, you should think of the probable tank mates to avoid future fights.

For example, no matter how much safety measurement you take, Koi and Sharks will fight each other. There is no way you can stop or prevent them from fighting.

If you are determined to keep more than one territorial fish breed in the same tank, at least separate their territories with rocks, plants, or other types of separators.

In this way, the small fish in your tank can have some kind of hiding place from the large ones. Moreover, you can enhance the beauty of the tank at the same time.

Get a Bigger Tank

It’s always better to give an ample amount of space for your fish to roam freely. Yes, bigger tanks will cost more, but it can save you from the grief of having your favorite fish from dying.

Moreover, if your fish die from the attacks of other fish, their death will be your responsibility – trust us when we say, that can hurt.

This table should give you a brief idea about the probable tank size for the fish:

Changing water is a must if you want to see your fish thrive. No matter the quality of your filtration system, you can never escape from the duty of changing water.

It will save your fish from ammonia and nitrate toxicities.

The rule of thumb is to change 10% to 15% of the total water every week. In the case of a heavily stocked tank, increase the percentage to 20%.

If you don’t have a filter, you should change 25% of the water on a weekly basis.

Try to Maintain a Steady Temperature

Temperature plays a crucial role in the mood of your fish. Imbalanced temperature leads to stress that eventually leads to aggression among the fish.

But set the temperature according to the species of fish you are keeping. Obviously, not every fish prefers the warmth level. 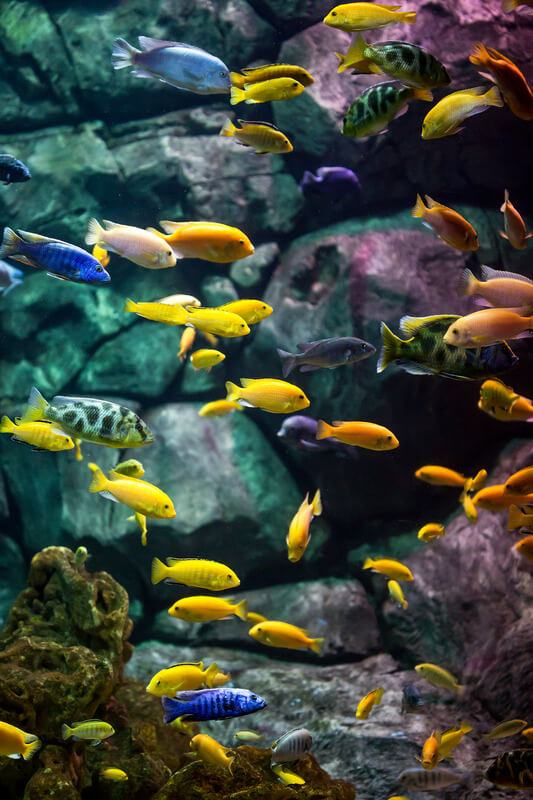 So, it always depends on the breed of the fish.

Offer an Adequate Amount of Food

Never keep your fish hungry for a long period of time. In fact, you should provide them food maintaining a strict timetable. You don’t want to agitate your fish for food shortage.

If you have omnivore or herbivore fish, have edible plants in the tank. In this way, they will never have any scarcity of food even when you are not in your home.

A Balance Between Male and Females

As we have said earlier, having too many males in the same tank, they will fight other males to gain affinity of the females.

We suggest having fewer males compared to females. This reduces the chance of the males fighting with other males over mating partners.

Separate Breeding Fish in Other Tanks

If you are planning to breed fish, you need to take additional measures. First of all, not all fish will mate in an open tank. They feel shy as the mating process makes them vulnerable.

During that process, you don’t want them to feel stress at all.

Besides that, you need to keep in mind that other fish might hunt and eat all the fry in your tank.

Female fish will protect their fry. This can result in having a very aggressive mother that attacks all the other fish in your aquarium.