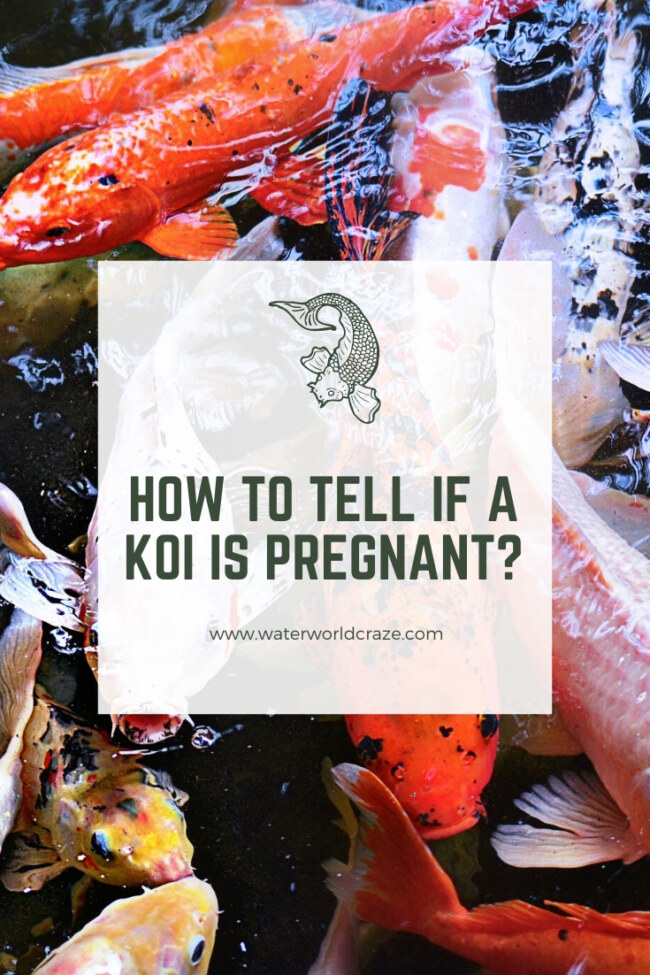 How can you tell if a koi is pregnant? This question is very important especially for those who want to breed koi fish. On the other hand, the answer to this question is also useful to those who do not want to have koi babies in their ponds. Is it easy to know if your koi fish is pregnant?

It is easy to determine if your female koi fish is carrying eggs. You only have to take a look at her appearance, behavior, and the behavior of your male koi fishes. When it is the spawning season, it is highly likely that the eggs have been dropped and the males are busy fertilizing them.

Would you like to manage the population of your koi fishes in your pond? Do you want to take the fertilized eggs in a controlled environment to protect the koi babies? Whatever your purpose is in knowing if the female koi is carrying eggs, this is a great article for you, so keep on reading!

Technically, female koi fishes cannot get pregnant as they do not give birth to live young. Instead, they form eggs inside their bodies and drop them during the breeding season for the males to fertilize.

Therefore, there is really no mating behavior that happens as the males fertilize the eggs once they are separate from the female.

However, what happens during the spawning season is that the males will encourage the females to drop their eggs. So how long does a female koi fish form and carry her eggs? You might be surprised that they will form the eggs for a year.

Meaning, if they start forming eggs this spring, they will then drop the eggs next spring. The spawning usually starts when it gets warmer and for some breeders, they believe that koi fishes follow the phases of the moon in order to trigger a spawn.

Going back to the female koi fish who just dropped her eggs during the spawn, that is actually there is to it. She will leave the eggs behind and let the males do their thing.

In fact, she might even come back for the eggs just to eat them, or if there are already hatched ones, she might eat the fry.

After dropping the eggs, she will then move on to forming new eggs in her body. Once a year has passed, she will drop them again and the cycle goes on and on. 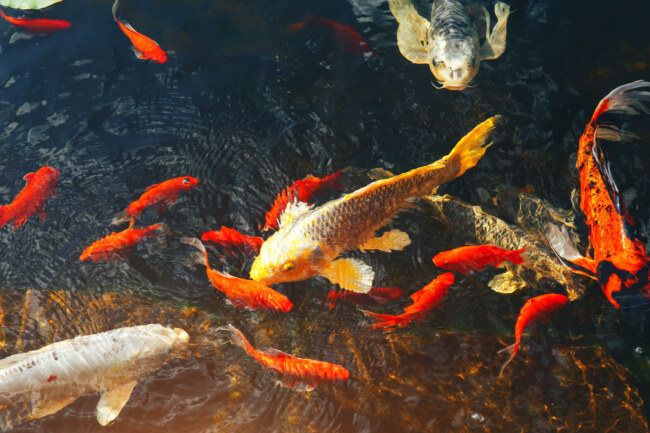 It is important to know the behavior of your koi fishes before they start spawning. This is the case as you might want to be on the lookout for dropped eggs or even separate the females with eggs in order to prevent egg fertilization.

The thing is the “pregnant” females usually get beat up when it is the spawning season as the males will aggressively bump against them to encourage them to drop their eggs.

Therefore, if you have females that are weak or recently got injured before the spawn, it is a good thing to pay attention to their behaviors “pre-spawn” so you can separate her.

Most importantly, as koi fishes are cannibalistic, you can easily predict when the eggs may drop even before they spawn. In this way, you can easily look for the eggs in order to let them hatch in a safer environment.

Here are some of the behaviors of your koi fishes before they spawn:

It is definitely easier to determine if your female koi fish is carrying eggs than trying to determine the gender of your koi fishes. The reason for this is that it is apparent in their appearance as to whether or not they are carrying eggs.

Also, doing so will not stress them, so it is a win-win!

We mentioned earlier that you might get mistaken when it comes to differentiating a plump female koi fish and one who is carrying eggs. Knowing their age will surely help in this case. The general rule is, their age is directionally proportional to their size.

The size is important as once they reach a certain size, it is an indication if they are already sexually mature. For females, they are considered sexually mature when they are three to five years of age. By this time, they would have grown to 10 inches long.

This is the most important aspect since like what we mentioned earlier, females who are carrying eggs look so obvious. She will look bloated, but it is as if the bloat is just showing on one side. Usually, breeders observed that this “bulge” looks more apparent on the left side.

The biggest clue is that she will appear larger than male koi fishes. Given that male koi fishes naturally are smaller, but this time the gap in their sizes will be more obvious. We show you in this article how to tell your koi fish’ gender in detail!

This is such an important factor as if you see a female koi fish look this way, but she is shorter than 10 inches (which means that she is not carrying eggs) it is highly likely that she is suffering from a disease or she has parasites.

The timing is also important in this aspect. So if you see a juvenile female having this appearance after the spawning season, then the chances are high that she might be sick.

On the other hand, if a female koi fish looks this way and it is spawning season and she is 10 inches long or even more than that, then she is simply carrying a lot of eggs. 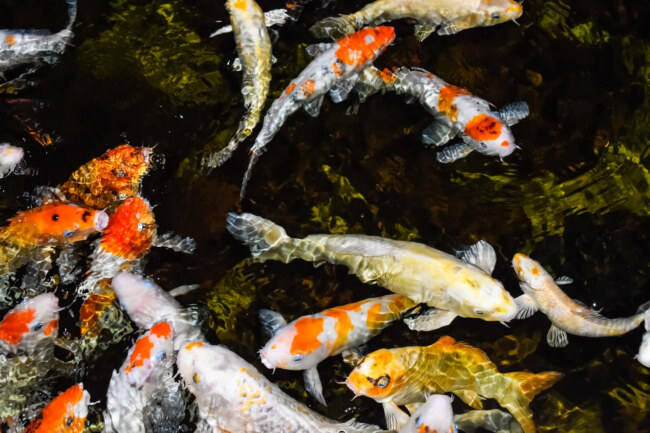 If it is hard to spot the females as usually when they are already carrying eggs, they try to evade the males, you should avert your observation to the males.

If the males are actively swimming around the pond and forming pairs, it is highly likely that the female koi fishes in your pond are filled to the brim with eggs.

Researchers and breeders found out that even before the spawn, the males try to find a pair. This pair is actually another male. They do this so that come spawning season, they can bump against the female on either side which will make it easier for the female to drop her eggs.

More than that, some breeders have also noticed that males do a “practice bump’ against juvenile females. There is not much research about this behavior but a lot of people theorize that the males are simply gearing up for the spawn.

This is such an ironic behavior of the female koi fish as the logic behind doing so gets defeated by her actions afterward. Here is what happens:

She does this so that the eggs will stick properly to that area and will not be harmed. Such a caring mother, am I right? But this is where the irony happens.

As koi fishes are cannibalistic, after the female koi fish drops her eggs and swims around the pond, she might pass by her eggs and eat them.

As you can see, there is really no point in keeping the area clean to ensure the eggs stick properly and away from harm, as they themselves will eat their own eggs. Oh, koi fish logic can sometimes be funny.

It is important for you to know if the female koi fishes are carrying eggs especially if you are not interested in breeding koi fishes or if you want to control the population of the fishes in your pond.

You can prevent this from happening by separating the female fishes who are carrying eggs before they spawn. You can simply use a collapsible fish net so that she will not be stressed.

On the other hand, you can try to divert the trigger of the spawn by covering your pond and tweaking the water temperature. Keep in mind that warm temperature can trigger a spawn, so keeping it cool during the day time will help.

What To Do If You Want To Breed Koi Fish

In such a case where you are serious in breeding your koi fishes, knowing which females are carrying eggs are truly essential. In this way, you can follow their activities and know exactly where they dropped their eggs.

Once fertilized by the males, you can then collect the eggs so you can hatch them in a different area, away from their cannibalistic parents. On the other hand, if you want to have a peaceful spawn, you can then separate the female who is carrying eggs and also two males.

You can then put them in a ‘breeding pond” and let them do their thing. In this way, the female will not get as beat up compared to when she gets left behind in the big pond for numerous males to bump against her. Lastly, once the eggs are fertilized, you should also separate the eggs.