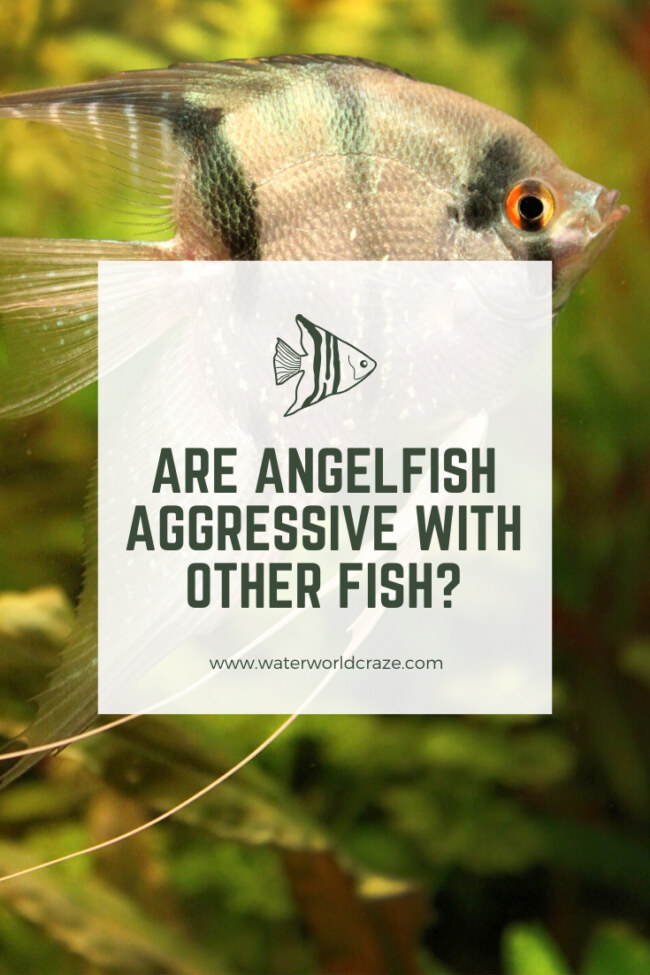 The phrase should be changed to it’s a fish eat fish world because that is what your fish is going to do.

Are angelfish aggressive with other fish? The angelfish are not any more aggressive than any other fish – they are just bigger. On a scale from completely docile to predator they land in the middle, they are more opportunist than vicious. Any aggressive tendency in your angelfish has a reason and can be negated with a little observation and accommodation.

Fish might seem like a simple pet to care for, but each breed comes from all over the world in various bodies of water with different habitats. To get the best experience out of owning a fish tank you need to know the basics for keeping each of your fish happy.

Part of that is learning how they like to live and what types of fish cohabitate well together. Read further to learn more about your angelfish, how they display aggression and what to do about it.

How and when they display aggression

The freshwater angelfish aren’t necessarily aggressive, they are just a larger common fish so their hostility is due in part from people not understanding them. Larger fish will eat smaller fish if they can do so.

Their mentality is if food is around I might as well take part. So it’s more of an opportunistic behavior rather than aggression. To decrease the antagonism in the tank you ultimately need to understand the angelfish so that you can negate any primal actions.

Sometimes these behaviors don’t manifest right away. When you first get an angelfish you might be deceived into believing that they have a good relationship with everyone, but then they age. One day you will go to your tank and wonder what happened to your guppies.

They will eat anything smaller than themselves. In part due to their instinct in any fish food comes and goes so you better get it now. Even when you feed them regularly that idea will never leave them.

This is a common fish trait and not exclusive to the angelfish unless the fish in question has a special diet or their mouths are inapt at eating other fish.

Angelfish will show aggression towards fish their size as well to set up dominance in their school, your tank. The reasons why they would show this aggressive range from tank size of the number of fish, which is discussed later.

Sometimes it’s obvious that the angelfish is fighting with other fish, while others you can find in the subtle behavior of the other fish. This is done by:

There are a few reasons why the angelfish would show aggression towards those that are their size, breeding or territorial aggression. It’s better to have angelfish in at least a pair so they won’t pick on your other fish during spawning time.

A warning if you want to keep the angelfish fry: While in the wild the freshwater angelfish is a very attentive parent their years in captivity have decreased these instincts. They will eat their young if they happen to spawn.

If you want to keep the baby angelfish, put them in another tank while they are eggs. Your angelfish will not miss them and this way they have a chance to live.

Here are a few of our articles we highly recommend reading if your angelfish are laying eggs or if you plan to breed angelfish: 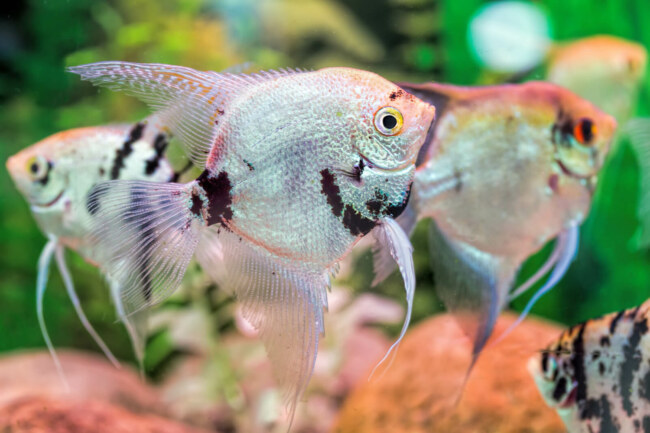 Some types are more aggressive than others

They also don’t have a particular diet that prevents them from snatching up one of your other smaller fish and their mounts don’t limit them to a certain specific food group.

All Angelfish are omnivores, with the more common freshwater angelfish being the more carnivorous of the two. The marine angelfish is a completely distinct species even though they look similar and similar personalities.

The marine angelfish are in the family Pomacanthidae and come in a range of 86 diverse species. The saltwater angelfish will grow larger, the largest species coming in at around 24 inches high, while the average size is from 8 to 12 inches.

The larger the angelfish is the more aggressive it will be, for the marine angelfish the larger one is best to keep together with those of the same species. If you have a variety of saltwater angelfish together they will pick on the one that is most different from the others.

The average-sized marine angelfish, 8-12 inches, do better with other types of fish as long as they are of equivalent size.

The freshwater angelfish is under the family Pterophyllum and has three distinct species.

The P. scalare species is the most common type of angelfish sold, so the odds are that you will have this type of fish. They are also the most docile of the freshwater angelfish, while the P. leopoldi is rarely available due to their overly aggressive nature.

If you are new to fish make sure you are getting the p. scalare species. Having an easier going fish will help with the inevitable mistakes that come along with trying something new.

If you are a more advanced owner then try out the p. leopoldi, but this species might best be kept in a tank with their species.

How to decrease aggression

As noted above they use their waste to communicate their social status. A way that you can prevent aggression is to clean their tank less often. When their social status urine is eliminated from the tank then the angelfish will go on the defensive to bring back their status.

Some people recommended not introducing angelfish to other types of fish at all.

This will prevent you from losing other fish in your tank, but they will still show aggression towards each other and will even eat their spawn if the need arrives which occurs due to generations of inbreeding.

Another method for those who want a variety of fish is to place them in the tank at the same time so there are no territorial issues. With a tank of angelfish the more you have the better the aggression will be.

Tank size also contributes to the angelfish’s aggression. You need at least a 20-gallon tank for one angelfish and an additional 10-gallons with each additional angelfish.

They are a shoaling type fish, so socially they do better with many members of their species.

It might sound contradictory, but having more angelfish to a tank will calm down the aggression that they display to each other. In the wild the freshwater angelfish is a shoaling species, meaning they stay together for social reasons.

This is different than a schooling type of fish that swim together in a coordinated way. Getting them in even numbers male and female help when they display aggression during spawning. Angelfish mate for life.

The current in the water will lead your angelfish to anger. They originate in the lakes and ponds of South America where the angelfish cruised around looking for food.

They are not accustomed to the high currents that happen in rivers and the ocean so your tank needs to reflect that.

Even though they are a fish, they aren’t the best of swimmers and with a high current caused by your filtration system, they will become disoriented and then attack those who are around.

If they are hoovering in one place in your tank and not swimming around, when not beating everyone else, then adjust your filter. You need to accommodate the type of fish that you have instead of any standard.

Lack of food will also make them aggressive. 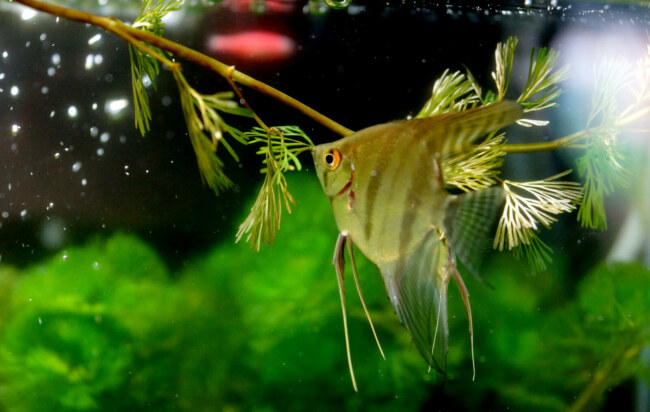 It is easier if all of the fish that you intend to get are introduced to each other at the same time. Not an easy task for someone who likes to collect fish. If you know that you will be frequently adding fish to your tank try to wait until the newer fish hits maturity.

If you add a smaller fish in a tank with angelfish they will just end up eating the new addition. Patience here will help you enjoy your new fish for longer than a few days.

Freshwater angelfish, Pterophyllum, are a member of the family Cichlidae species. It’s safe to stick with other cichlids, just stick to the ones that are comparatively the same size as the angelfish. The larger ones will become territorial and pick on the angelfish.

Other great tank mates for the angelfish:

Though these rams are smaller fish they live well with the angelfish for the same reason that the Corydoras catfish does.

Platies are a colorful fish that has a good relationship with angelfish. They prefer a higher current than the angelfish does so make sure to provide enough flow for one while not endangering the other.

The angelfish does have a habit of eating young platies fry, so if you want babies make sure to pull them out before the angelfish spots them.

There are a lot of tetra breeds that are simply too small to live with the angelfish. Talk with your breeder about what tetras go well with angelfish.

Harlequin Rasboras have the same issue that the tetras have, they are simply too small. It’s best to avoid any fish that will be much smaller than a full-grown angelfish or they will become food.

On the other end of the spectrum, we have larger cichlids, predators, and sharks. Any heavily aggressive fish will pick on the angelfish since it is now on the smaller side.

Overall you want to look for fish that are either bottom dwellers or those that are the same size and peaceful. It’s easier to keep peace in a community tank if each fish has plenty of their species. The odd man out typically will get picked on.

Angelfish have a reputation for being a little difficult. While that isn’t completely true, they have their moments, but there are a few reasons to explain this reputation.

They are one of the more popular larger fish out there, even for beginners, who might not understand the nature of fish.

For those who are used to domesticated animals that might fight, but rarely kill each other it might be a shock to the system and we blame the aggressor for their nature.

But stick to the above tips and your angelfish will be happy and you won’t have to mourn another poor baby that got snatched up.