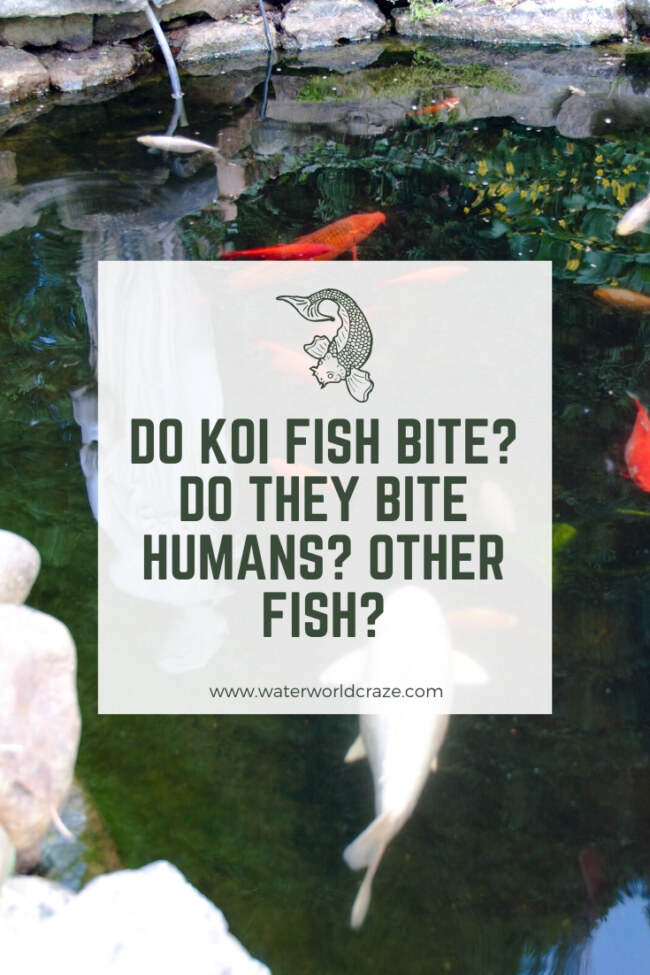 Koi fish are easily one of the most popular fish breeds. They enjoy being fed by hand and they are fiercely loyal to their owners. But when these fish get older, their mouths get notoriously large, which means that they could nip your fingers if you get too close.

But is this something you should actually be concerned about?

The answer is no. Their teeth are too far down their throats to actually bite you. The most they will do is mistake your fingers for food and grasp onto them- but will quickly let go. However, koi fish could bite each other during the mating season, so you should keep an eye on them.

In all, biting is not an issue you should worry about. But, we will give you some information about your koi ‘biting’ you and about them potentially biting the other fish.

When Your Koi Fish Bite You

If you don’t know too much about koi fish, the first thing you must know is that these pets are loyal to their owners. They have the ability to recognize and distinguish the person who feeds them.

They’re one of the few fish that will actually enjoy being fed by hand, so when you approach the koi pond or tank, it’s not unusual for your fish to come up and snatch their food from your hand in a similar way that another animal might.

Do koi fish have teeth?

Most people tend to believe that koi fish don’t have teeth, but that actually isn’t the case. Koi fish, in reality, have a lot of teeth. With that being said, however, their teeth are far down their throat.

This makes it virtually impossible for a koi fish to actually chomp down on your fingers. These teeth are used to chew up their food. A koi fish will grab its food through its mouth and chew the food up in its throat.

So, even if your entire finger were to end up in a koi’s mouth, it would not be able to bite you with its teeth. You may also notice that there are some teeth floating around in the water that look relatively similar to human molars.

Koi fish tend to lose their teeth on a regular basis, but then their teeth grow back again quickly.

Should I worry about my koi fish biting my finger?

Once again, koi fish are loyal to their owners and will frequently begin to associate them with feeding time. It’s likely that this was the case and your fish simply got caught up in the moment and mistook your finger for food.

It might seem like your fish actually bit you because of how powerful their mouths are. This is naturally bound to startle you the first time it happens. Koi fish are known for having large and muscular mouths, but this isn’t something to be afraid of.

Again, a koi fish’s teeth are in the back of its throat, so it’s impossible for the fish to actually bite you. Even if you were to completely extend your finger, it wouldn’t be likely that you could actually reach the spot where their teeth are.

They have a powerful grip with their mouths, but this won’t be painful and it should never have the ability to draw blood. Once your fish realize that your finger isn’t a part of their meal, they will quickly let go!

They taste all their food before swallowing it, and, of course, we can’t imagine that our fingers would make for a tasty snack. So, you shouldn’t worry about this whatsoever. The video below shows what we mean.

Are koi fish dangerous to humans?

Once again, the answer is no. There is no need to worry about any potential aggression that a koi fish might show towards a human.

And as far as diseases and illnesses go, koi fish and humans come from very different species and it is not possible for a koi fish to pass disease or parasites on to a human.

Koi are friendly fish and they even have the ability to recognize their owner. Thus, it is not unlikely or unheard of for koi fish to swim to the surface of the tank when they see their owners approach for a light petting or a pat on the head.

Yes! Koi fish are among the most intelligent fish species. They are known for having great memories and the ability to recognize their owners. In addition, they are loyal to their owners and have very unique personalities.

In this article, we show you how smart koi fish actually are and 3 tricks you can teach them!

Will Koi Fish Bite Other Fish?

Once again, koi are on the more docile side. But that doesn’t mean that it will never bite the other fish in your tank.

The most common reason why this will occur is that it is their mating season. When koi fish breed, the male fish will start to torment its female counterpart in an attempt to get her to mate with him.

This results in the male fish biting and nipping the female fish. However, you typically will not see koi fish biting each other outside of their mating season. They tend to live together in harmony and don’t express any sort of aggression towards one another.

According to one study that examined aggression in koi fish, the most common type that they display towards one another is chasing, whereas the least common is biting. So it doesn’t seem like this should be a major concern.

If you have small fish in the tank or pond, however, this could prove to be a little dangerous. You will want to make sure that you have done proper research on what species of fish can live with koi fish and which ones can’t.

For example, fancy goldfish should not be placed in the same tank as koi fish. It is very common to see koi fish displaying aggression and biting behaviors towards this species of fish and other smaller species.

Even though koi fish do not have teeth in the front of their mouths, they do have powerful muscles. While this might not be painful to you- it simply feels like they’re sucking on your finger- it is easy to imagine the kind of pressure this has the potential to put on a much smaller fish.

One behavior that your koi fish might exhibit toward the other fish, however, is dominance. There are some koi that have a more dominating personality than others. They want to be in charge and they want to show the smaller fish in the tank who’s boss.

So, some people noticed that their koi fish would chase around the smaller fish, nip their tails and fins, and other behaviors in order to assert their dominance. This is not terribly common, however, so the chances of this happening in your tank or pond aren’t necessarily high. 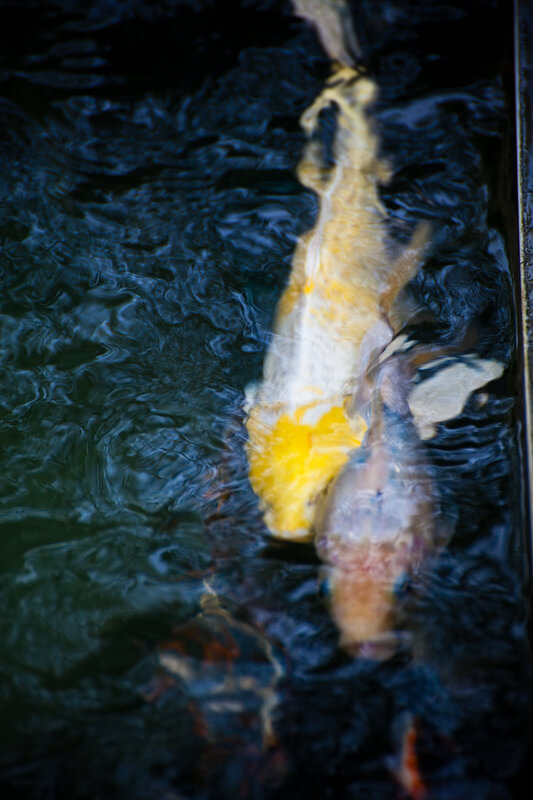 Can Koi Fish Eat Other Fish?

This is another common question that gets asked rather frequently by people who are thinking about purchasing koi fish. In all, koi fish are not a dangerous species and they don’t particularly go out of their way to torment other fish.

You are not going to notice your koi fish actively hunting down other fish and causing them terror.

With that being said, a hungry koi fish will generally try to eat anything small that comes in its path. This includes fish eggs, tadpoles, snails, and other similar creatures.

They also love to eat insects. But it’s rather unlikely that a koi fish will try to eat a small fish, and they definitely aren’t going to eat any of the larger fish you have in the tank.

The only things you should be aware of are making sure that you don’t place your koi fish with another species that it is incompatible with and understanding that koi fish might nip at other fish.

Many people like to keep their koi fish with minnows in a pond. We explain here what you should know about that!

What are some other species that can live with koi?

While koi tend to be rather calm for fish, there are some species that are better suited for being placed in the same tank or pond than others. Some of these include larger goldfish, sturgeons, barbel, barbs, and catfish. You can also place small koi with large koi.

We have created an article here to show you what fish can live with koi fish in a tank. Read it here!

In all, a koi fish’s bite is not something that you need to worry about. It’s possible that the fish will lightly suck on your finger because it mistook your finger for food, but once it realizes the mistake, it will quickly let go.

A koi fish’s teeth are in the back of its throat, so it isn’t going to bite you anyways. It may prove to be an issue for the other fish in the tank, especially if they come from smaller species because koi fish want to be able to assert their dominance.

With that being said, a koi fish won’t eat or kill another fish. So, you can safely include koi fish in your home pond or tank.