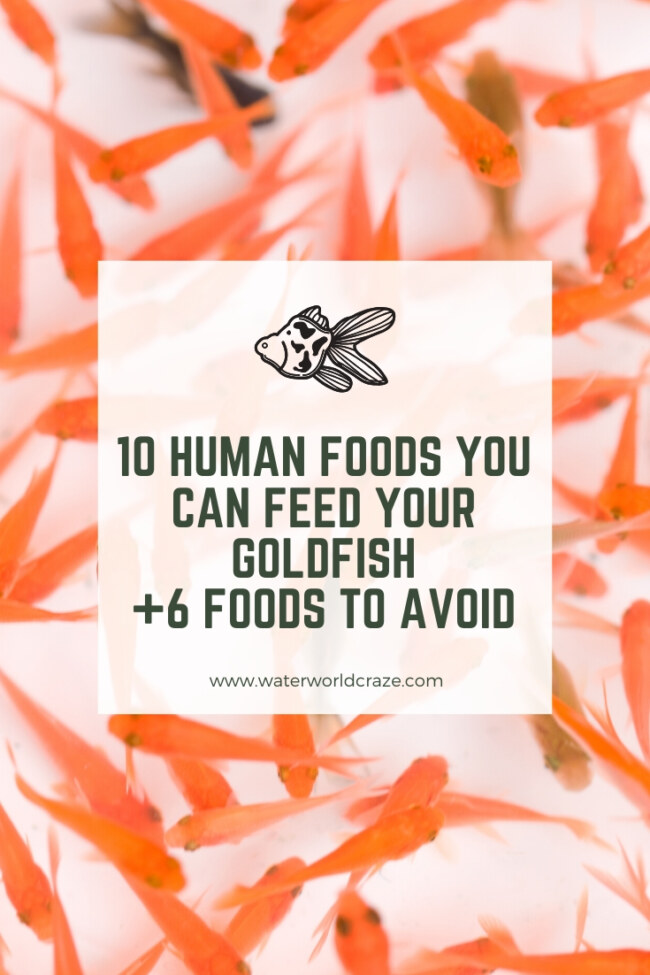 Before you introduce any pet to your home, it’s important that you know what kinds of food you should and shouldn’t feed it. This will include goldfish.

Whether you won your goldfish at a carnival or you simply want a pet that is rather low-maintenance, it’s important to be aware of the different foods that you can feed your goldfish.

While most people will simply feed their goldfish the flakes and pellets that they were recommended at the pet store, there are some people who wonder whether or not it is possible for goldfish to eat human food. The answer is yes.

There are many different human foods that goldfish can safely eat, provided that you have cut them into small pieces and have cooked them to make them as soft as possible (remember, goldfish are small and don’t have teeth in the front of their mouths).

Some of these foods will provide your goldfish with great nutritional value and it’s recommended that you add some of them to your goldfish’s diet.

Mainly, goldfish will eat flakes or pellets. This is what most people will feed their goldfish and it can easily be found at any pet store. An ideal mixture of goldfish food would include shrimp, veggies, and daphnia.

They should eat between 2 to 3 times per day and need to avoid overfeeding. Some people give in and feed their goldfish every time they seem to be begging at the surface of the water, but overfeeding can cause a lot of problems, such as contamination and indigestion.

The tank will get dirty from the leftovers, which will harm the environment for your fish. It’s usually recommended that you feed your goldfish the same amount of food that would equal the size of their eye or that could be easily consumed within 2 minutes.

Make sure that the temperature of the water in the tank is where it should be, because if the water is too cold, your goldfish will not be able to digest food properly.

Also, in case you see any behavioral changes in your goldfish after feeding new foods, you should read our articles below:

When you go into your kitchen, you might wonder whether or not you can feed your goldfish some of the very foods you eat. Luckily, you most likely can! Here’s a list of the most popular foods that goldfish can eat without any difficulty that can be found in your own kitchen.

Believe it or not, oatmeal can be a fantastic treat for goldfish. Many goldfish seem to like oatmeal and it does seem to provide them with some nutritional benefits.

Larger goldfish have the ability to eat raw oatmeal, but if your goldfish are on the smaller side, you should try to soak the oatmeal or cook it before feeding.

It is also important to make sure that you provide your goldfish with smaller pieces so that they have an easier time consuming the food and so that it doesn’t block their intestines. 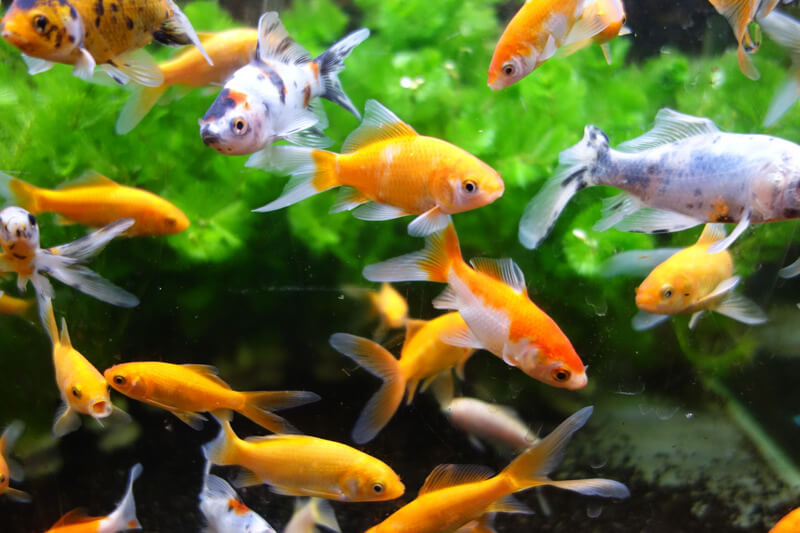 Goldfish are also capable of eating vegetables. In fact, this seems to be the food group that will be the safest for them. Here are some of the most popular vegetables that people feed their goldfish.

Carrots are a highly nutritional treat that can even enhance the color of your goldfish. This is due to the fact that their color is mostly based on their diet. It’s recommended that you cook the carrots first until they’re completely soft.

Then, cut the carrot into very small pieces that your goldfish will have an easy time eating.

Peas are another popular snack for goldfish. They even have the ability to heal goldfish when they’re sick or constipated. You will want to make sure that the skin has been peeled off of the peas before you feed it to your goldfish to prevent choking.

It’s also recommended that you cook the peas to soften them a little bit first and then chop them into smaller pieces that your fish will have an easier time eating the peas.

Cucumbers aren’t necessarily the most nutritional food on our list, but goldfish do enjoy them. You should try to feed them cucumbers less often, though, and certainly don’t use cucumbers as your fish’s main meal.

Remove the skin first and microwave it for a few seconds to make the cucumber soft. Then, cup it into very small pieces that your goldfish can eat. Some goldfish like the seeds and others don’t, so whether you keep them or remove them will be based on your goldfish’s taste.

Leafy greens are the healthiest ‘human’ food that you can feed your goldfish. They love to eat lettuce, kale, spinach, and other greens.

Eating greens will make your goldfish a lot healthier and will prevent them from producing too much ammonia.

Surprisingly, goldfish can eat garlic and it is often added as an ingredient in goldfish food. But you should only feed them garlic in moderation because it has the possibility of being toxic if your goldfish consume too much.

Many people chop up garlic into very fine pieces and add it to other food that they are giving their goldfish. Garlic has the ability to kill harmful bacteria and parasites, as well as stimulate a goldfish’s appetite.

Fruits are also safe for goldfish to eat, but they shouldn’t be fed fruits too often and fruit should not be used as a substitute for other foods. Here are some fruits that are safe to feed goldfish.

If you choose to feed your goldfish apples, make sure that you have completely peeled the skin off to prevent choking and cut the apple into small pieces. Some people recommend that you microwave the apple to make it softer, but this isn’t mandatory.

You shouldn’t feed them apples too often, though, because apples have a lot of sugar and calories.

You can also feed your goldfish watermelon in moderation. You don’t necessarily have to cut the watermelon into tiny pieces, but you should make sure that you have removed all the seeds.

Another great thing about watermelon is that it floats, so you can place the watermelon at the top of the water. Your goldfish will chase the watermelon until it has been completely eaten, which will provide them with a lot of exercise.

But again, you shouldn’t feed them watermelon too often. 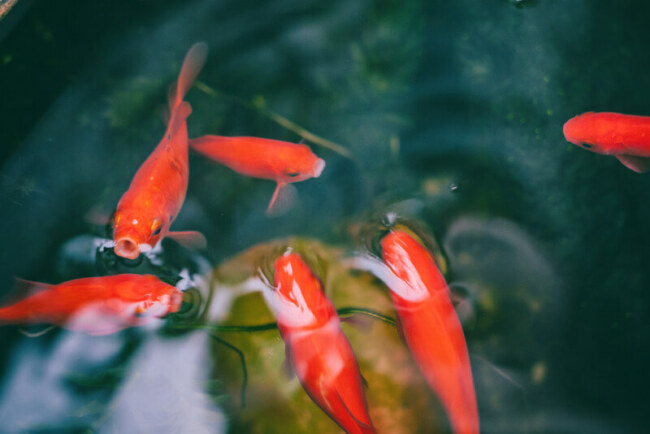 Foods You Should Never Feed Your Goldfish

With all that being said, there are some foods that you should avoid feeding your goldfish at all costs.

For a long time, people recommended feeding your goldfish bread. In fact, many people have done so for hundreds of years. But it’s just not something that you should do.

This doesn’t, however, mean that your goldfish has been poisoned or will inevitably die if it has eaten a few bread crumbs, but you should avoid feeding them bread at all costs. White bread, in particular, carries no nutritional value to your goldfish.

The main reason why you shouldn’t feed your goldfish bread is that it can expand and swell within your fish’s stomach, which will block important passageways, leading to constipation and a variety of other issues.

You should also avoid feeding your goldfish crackers for the same reason. If you do feed your goldfish one or two, they aren’t likely to die, but crackers can expand in your goldfish’s stomach, leading to constipation and other types of blockages.

Cereal is also not likely to kill your goldfish, but a common tendency among different grains is that they will likely expand and swell in your goldfish’s stomach, causing constipation and a variety of other health issues.

Plus, we can’t imagine that some of the fancier cereals containing large amounts of chocolate, marshmallows, and other processed foods will be terribly healthy for your goldfish.

While you will be able to feed your goldfish many different greens- and it is recommended that you do so because of the vast health benefits- there are some greens that you should do your best to avoid. This includes rhubarb greens because they are toxic for goldfish.

This is generally in reference to meat. You really want to make sure that you avoid feeding your goldfish chicken, beef, pork, or any other kind of meat, even if it has been chopped up and thoroughly cooked.

Fat is a harmful ingredient for fish. Consuming any type of meat will cause fat to build up around your fish’s heart, liver, and reproductive organs. So, you generally will want to avoid fatty foods at all costs.

When you go to cook food for your goldfish, you will want to avoid cooking food in any sort of oil, including vegetable oil, coconut oil, and others. This is because fatty oils can be extremely toxic for goldfish and can poison them.

No matter what you go to feed your goldfish, you will want to make sure that you avoid overfeeding them. This is true even if you’re feeding them the most nutritious meal.

Goldfish have the tendency to eat too much, which can cause many different problems in their digestive system that are difficult to deal with.

So, the rule of thumb is to only feed your goldfish twice or three times per day and only feed as much as they can eat in a matter of a minute or two. 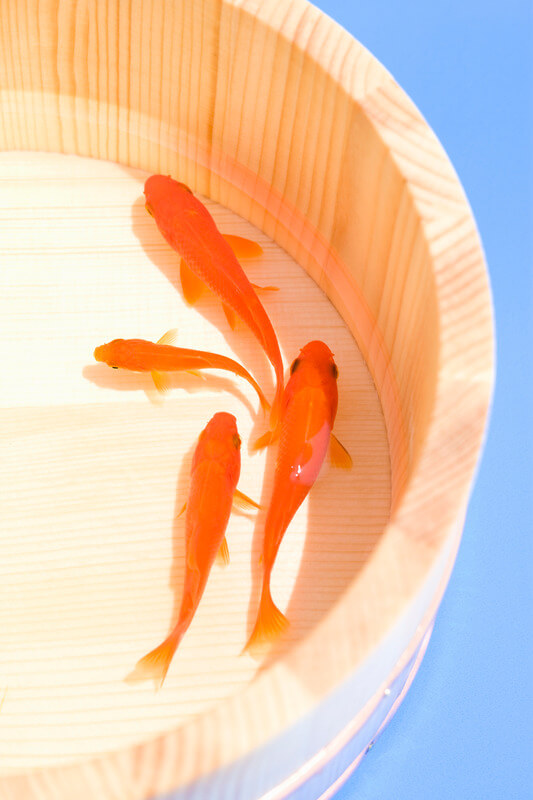 Much like other animals, there are many vitamins and nutrients that you should make sure to include in your goldfish’s diet. These are essential in making sure that your goldfish will live long, healthy lives.

Plant-based proteins are an essential part of your goldfish’s diet and you should aim to make sure that 45 percent of their diet consists of protein. It’s essential for their development and growth as they age.

Your goldfish do need minerals, but they generally will get all the minerals they need from the water. Some minerals such as iron, zinc, and magnesium have naturally been included in their diets. So, you don’t need to worry too much on this level.

Although we mentioned above that goldfish cannot digest mammalian fats, they do still need to have some fat in their diet because this is where they get their energy from.

Some people feed their goldfish ants, different types of mealworms, and fish oil so that fish can get the necessary amount of fat.

The most common vitamins that should be included as part of a fish’s diet include vitamins A, C, D, E, K, and folic acid. Luckily, most goldfish flakes contain all the vitamins a fish will need.

But sometimes, you might notice strange behaviors that may or may not be signs of a vitamin deficiency. You can always feed your goldfish live food to see if that’s the case.

Overall, it isn’t too difficult to take care of goldfish. They only need to be fed 2 or 3 times a day to be optimally healthy.

The good news is that many of the foods that can be found in your kitchen, vegetables, in particular, can be consumed by goldfish and will provide them with all the necessary health benefits.