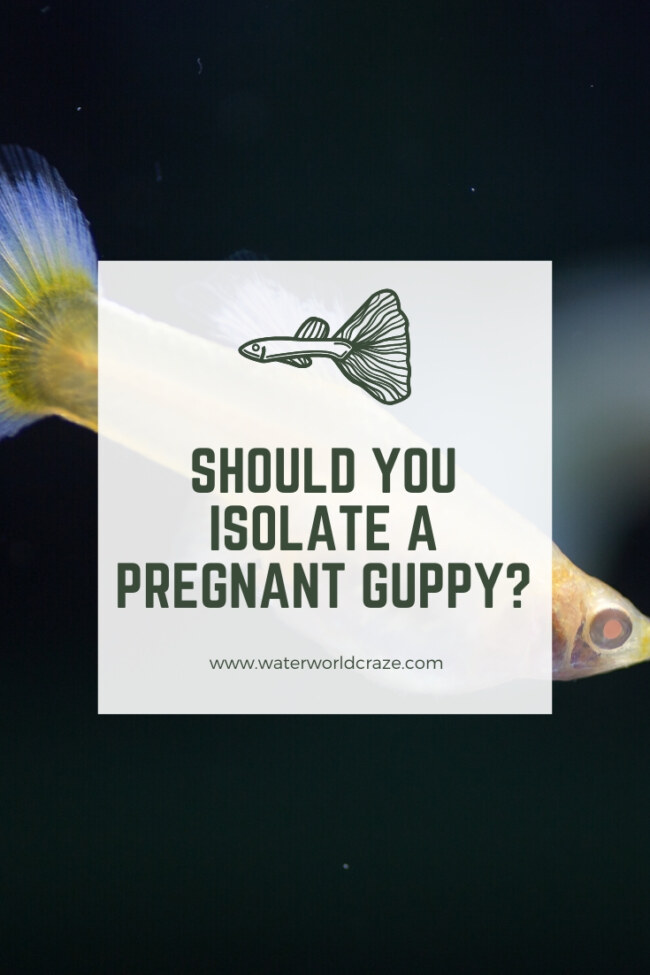 One of the most popular and common household pet fish is the guppy, after goldfish that is! Not only it adds plenty of color to your aquarium but is cheap and easy to maintain.

However, when it is time to multiply, you will find that they can overstock a tank relatively quickly, which can be an issue since you need to take extra care of the female guppy while pregnant.

Should I isolate my pregnant guppy? The answer is a definite ‘YES’. Isolating your pregnant guppy will help you focus on her needs and take care of her more exclusively than in an aquarium full of fish where there is competition for food, space, and survival.

However, to do this, you first need to identify your pregnant guppy before you take the next steps to isolate her and take care of her so she gives birth to healthy and active swimmers.

Guppy Facts and Why You Should Isolate The Pregnant Female

Native to South America, Guppies are a freshwater species with over 300 types.

They even have nicknames like the ‘rainbow fish’ (because they are colorful and vibrant) or the ‘millions fish’ because they multiply at an incredible rate (they have an average of 50 baby fish per month).

This is also one of the reasons why you need to isolate them when they are expecting so as not to overpopulate the tank as a whole, and you have about a month to prepare for it.

Another amazing fact about the guppy is that it does not lay eggs – it gives birth to live offsprings, which is an amazing sight on its own.

As an enthusiastic guppy owner, you will also be excited to know that guppies come in a variety of tail shapes that include the veil, double-sword flag, and lace tail.

How to Identify a Pregnant Guppy?

The first step in your mission to isolate a pregnant guppy is to identify one, and you have got a month to do this after you identify them.

They have a translucent body but you will easily be able to identify a dark spot under the tail towards the backside of their stomach if they are pregnant.

This dark spot, known as the gravid patch, increases in circumference and also becomes darker as the fries (babies) grow.

You may even be able to spot the eyes of the babies through their translucent bodies.

In the final stages of their pregnancy, the spot turns completely black and the guppies will appear fat and bloated.

Some other signs of pregnancy that you will be able to identify in a guppy include:

• Your guppy’s color will fade

• Her eating habits will change, either insatiably or not at all

• She may become more restless or hostile

• The pregnant guppy’s stomach will take a square shape (appearance)

• The gills will remain open (partly)

• She will remain at or around one spot in the tank, mostly near the aquarium

How to Care for a Pregnant Guppy?

For a pet animal as small and delicate as a guppy, you need to be extra careful and vigilant if you want them to be happy and active in their aquatic life.

A guppy’s pregnancy stages progress at a fast pace since the gestation period is mostly less than a month, therefore you need to take care of your pregnant guppy at all times.

There are three stages to taking care of a pregnant guppy:

This step has been discussed earlier, but it cannot be stressed enough that you need to isolate your pregnant guppy so as not to overpopulate the tank.

This also helps you ensure that your focus on the pregnant guppy is more than the other fish in the tank.

As with every pregnant being, your pregnant guppy needs good nutrition so that the fries develop and sustain.

However, since they have a tiny body, with most of it inhabited by its babies, they are not able to eat in the quantity needed to sustain themselves and their babies.

Therefore, you need to feed them three to five times a day, but make sure they are small meals so as not to overload them.

It is always a good idea to feed them frozen shrimp in brine or live ones coupled with high-quality flake food daily.

You can also add frozen-dried bloodworms and spirulina flakes to their diet. Variety is always a good idea to keep them healthy and happy, and also to supply them with all the necessary nutrients.

It is recommended to have two tanks ready for your pregnant guppy, apart from the community aquarium.

One where the fry will be left after birth, and the other one to isolate the mother again so that she can recover before she returns to the community tank.

The separate tank for the fry will ensure that they do not fall prey to the other fish in the aquarium, while also supplying extra care to them in the first few weeks of their development.

You need to make sure that you do not keep the mother isolated for more than 24 hours after identifying the pregnancy since this can inhibit the maturation of the babies.

You can also turn up the heat of the community tank for a while to speed up the maturation process, and then keep an eye for signs of the pregnant guppy getting ready to give birth.

In most circumstances, It takes between 2 to 6 hours for a guppy to give birth, however, if she is having some difficulty during the birthing process, it may take up to 12 hours for all the fry to be delivered.

In some instances, a mother gives birth to some fry and then resumes the birthing process after a few days.

Parents may even eat their own younglings so it is necessary to keep them separated, or fill the tank with more plants so that the fry can hide and take shelter.

Some Tips to Maintain the Guppy Population

• They become sexually active after the sixth week.

• The males and the females must be isolated between these times so as to prevent them from breeding.

• The gravid spot is the clearest identity of a female guppy.

• The male to female ratio should ideally be kept as 2:1 so as not to present more opportunities for breeding.

They are easy to dismiss with reasons such as ‘too boring and commonplace’, but their beautiful appearance and colorful presence will add some quality to your life and living room.

In fact, their birthing process is a beautiful example of how nature works.

How long does the gestation period last for a pregnant guppy?

The gestation period for a pregnant female guppy, such as the swordtail and veil, lasts for a period of around four to six weeks, after which they give birth to around twenty to hundred live offspring.

What is the life expectancy of guppies?

Guppies are known to have a life expectancy of around two years. However, there are numerous factors that can affect the life span of a guppy, such as food and nutrition. These fish mature around six to seven weeks on average.

Yes, unfortunately, guppies are known to die easily. This could be due to the lack of oxygen or poor water quality in the aquarium. Guppies are also quite sensitive to water temperatures – so you need to make sure that the water is neither too cold nor too hot.

Here are 20 reasons why your guppies are dying!