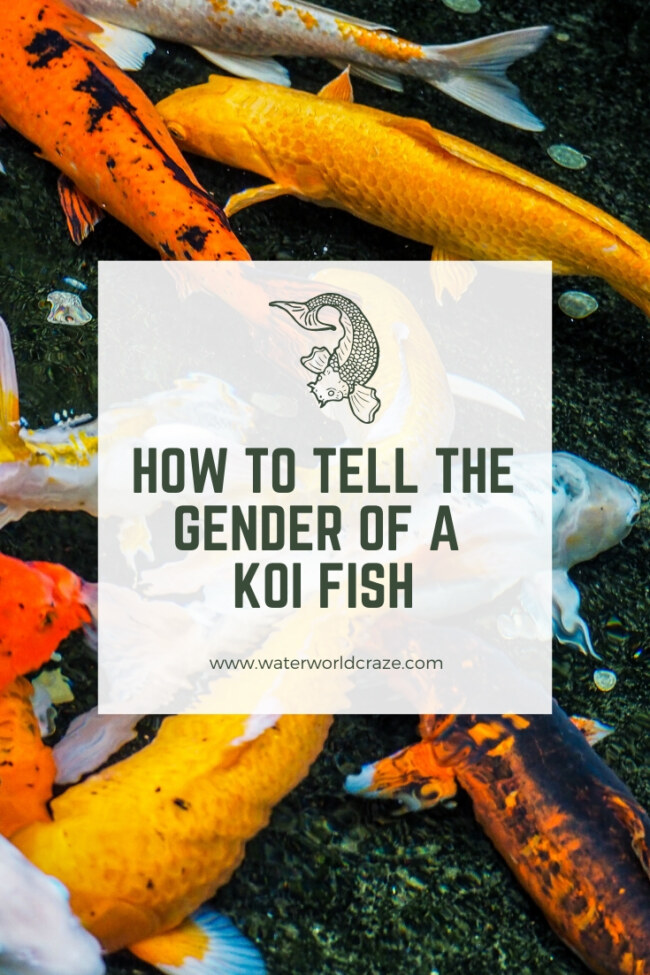 It will be really nice if you can determine the gender of your koi fish from the get-go. Not only will you prevent instances where your “Maria” turned out to be a “Mario” but it will also help you when you want to breed your koi fish.

Unfortunately, it is a bit difficult to know the gender of koi fish.

Koi fish are sexually dimorphic, meaning the males and females behave and look differently, but it is also difficult to discern. There are clues in their body shape, fins, and behaviors. The size and color is not a factor as they both have various colors and they pretty much grow in the same size.

Definitely, knowing the gender of your koi fish may be important in terms of properly naming them, but it is also essential if you want to trigger their spawn. More than that, knowing the genders will help you focus on the special needs of each gender.

If you want to know how you can tell the gender of your koi fish, then you came to the right place! Mind you, it will be a little bit difficult, but it can be done through proper observation and of course, the information that we are going to share with you. So read on!

We are not kidding when we say that knowing the gender of your koi fish is difficult. The reason behind this is that it is usually based on subtle differences in appearance and behavior. This is the reason why it will be hard to determine especially if your koi fish are under a foot long.

Further, it will also be easier to know their gender, if they are already old. Even yet, there might still be mistakes so you always have to recheck every once in a while. There are some people who determine the gender by looking at the size as females tend to be larger than males.

However, this is not reliable as at a young age, the males can be bigger than the females. There are also a lot of instances where they manage to grow in the same size.

Therefore, you have to look at the different aspects. In fact, you really have to gently take out your koi fish to have a closer look. Let us now take a look at the factors that can help you determine the gender of your koi fish.

How To Know The Gender Of Your Koi Fish

The following are the major factors that can help you determine the gender of your koi fish. There are still other factors, however, these things that we are going to discuss are the ones that prove to be accurate in doing so.

The age of your koi is somehow proportional to his or her length. In general, they are already considered mature when they are three years old. At this age, they are approximately 10 inches long.

Therefore, if your koi fish are between three to 10 inches, it is a vital clue that it will be hard to know their gender as they are still juveniles. With that in mind, it is safe to assume that you can properly sex them once they are sexually mature.

Shape Of The Body

This is where you really have to catch your koi in order to sex him or her. Make sure that you do not do this by hand, as this will stress them. Instead, you can use a fishnet that is collapsible.

A male koi that is already mature will have a body that looks slender. On the other hand, a mature female koi will have a rounded body. This usually happens when it is already the season of spawning as the females are starting to form their eggs.

In this regard, we also recommend reading the following two articles: 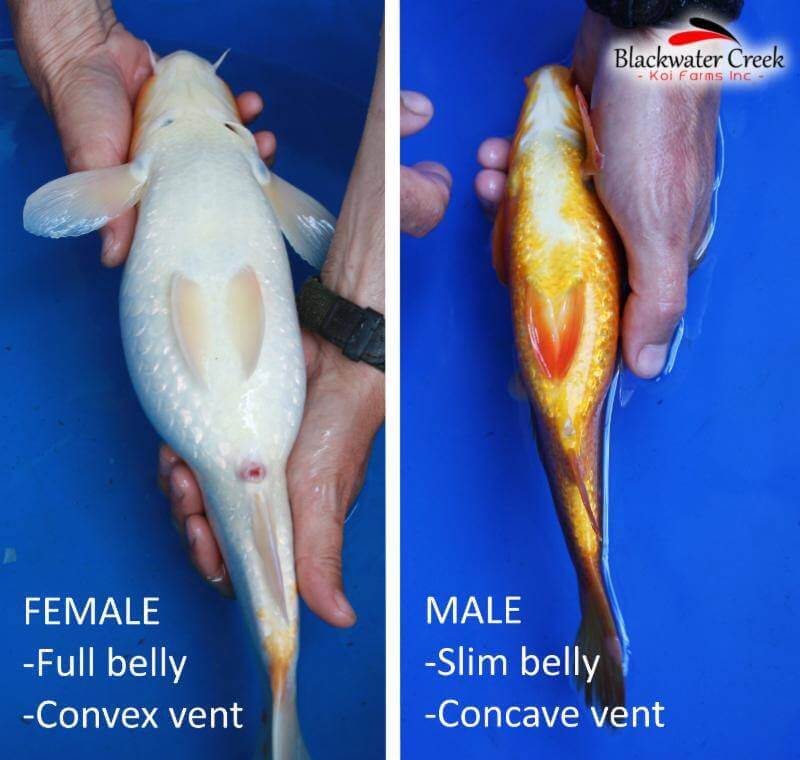 Shape Of The Fins

While your koi fish is in your collapsible fishnet, you can then examine his or her fins closely. Pay close attention to the pectoral fins. These are the fins that are on either side of your koi fish.

They are the ones that are responsible for the movement that is directional. This means that they are needed for your koi fish to go up and down as well as side to side.

The mature male pectoral fins will mostly have a solid color and it will appear pointed. As for the mature female koi, it will look more round and has a slightly transparent color.

In this factor, you should rely more on the shape and not the color. The reason behind this is that koi fish come in a variety of colors that one cannot really be sure if that is indicative of their gender. So there might be females that will have a rounded fin, but it comes in a solid color.

But enough of the scientific terms as what you need to look at is the line of the vent. It will look like a line that appears from the head to the tail.

If you have a mature female koi fish, that line will have a crossing which somehow forms a “T” shape. More than that, her vent will look pinker and it is generally rounder.

As for the mature male koi fish, what you have is just a straight line. At times, it might look a bit thicker than a regular line which is the case for plumper male koi fish, but it is still relatively thinner and straighter than those of mature female koi fish.

The next things that you should look at are the pelvic bones or the pelvic girdles of your koi fish. For some fish, these are located near the gills, however, for koi fish, you have to feel around their abdomen to know where those pelvic bones are.

Usually, they are far lower than the gills and underneath the abdomen. For this factor, you actually have to feel your fish with your hands as it will be hard to know by simply looking at them.

The mature female koi fish will have a soft abdomen in between the pelvic bones. This is the case as this is where she will hold the eggs.

On the other hand, you will feel that the mature male koi fish will have fused bones and that the abdomen is slightly harder. Keep in mind that in doing this technique, it is essential that your koi fish are of sexually mature ages.

The reason behind this is that when you do this when they are younger, both the male and female will have a harder abdomen and fused bones.

Next up are the tubercles. However fancy this word sounds, it is just a round node that shows up on the fins and heads of your koi fish. It is still unclear when they specifically show up, but more often than not, they are apparent when it is the breeding season.

During this time, you will see white spots on the pectoral fins and heads of the mature males. As for the females, they will not have these protrusions.

It is a bit tricky to catch these tubercles because they are natural and will eventually disappear after the ‘breeding drive” of your fish are done. Also, when they are mixed with juvenile koi fish, even the males will not have these so you might wrongfully determine them as females.

Again, the key here is to determine the age first. Once you know they are sexually mature, then you can have an accurate finding.

The eating habits of your koi fish are also important especially when it is nearing the breeding season. For females, they tend to eat more aggressively. There are also times when they stay near the surface as if asking for more food.

More often than not, they will continue to forage for food even after your feeding sessions.

As for the males, they will just eat for a while and then continue swimming around, leaving the females to eat what was left of the food.

If you are looking for info on how to feed your koi correctly, we highly recommend reading our Koi Feeding Guide here!

Lastly, and this is the obvious one, it is about their mating behavior. When it is not spawning or breeding season, all of your koi fish will be behaved and will just swim around the pond. However, come breeding time, the males will start chasing the females.

Moreover, the males will bump against the female in order to encourage her to drop her eggs. If you have a lot of koi fish, you will see that two males will bump a female on either side. More often than not, the fish in the middle is a female and the other two fish are males.

Moving on to the factor that we disregarded from the start, which is the size. It is a common belief that female koi fish grow larger than male koi fish. There is actually truth to this, however, it is not a good starting point in determining the gender of your koi fish.

In order for you to understand how this information came to be, it goes way back when the koi fish were first bred. At first, they paired large koi fish. However, breeders have observed that the female koi fish gets beaten up too much during breeding.

But just like what we mentioned earlier, size is not a good indication of gender. There are now several external factors that will affect the size, like the area of the pond, space, type of food, etc.

This is why it is more accurate to know the gender of your koi fish with the other factors we discussed.