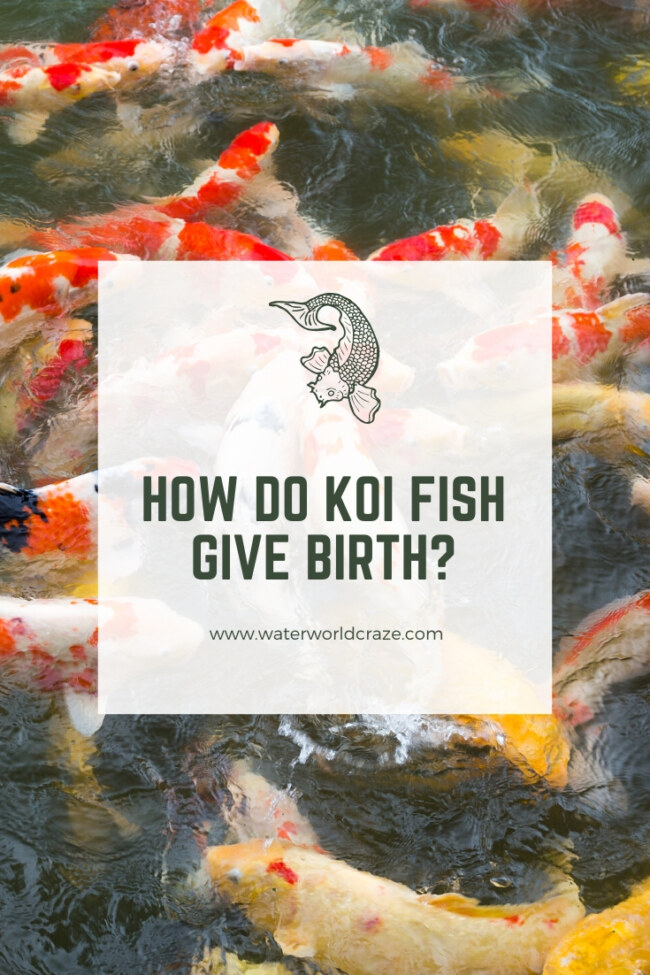 How do koi fish give birth? Do they do live birth? Or do they lay eggs? Definitely, koi fishes are not that rampant in terms of reproduction as compared to guppies. But they truly have some interesting mating and birthing rituals.

This is also the reason why they are called “scatterers.” You will find out more about this in this read.

Koi fishes do not give birth to live young, instead, they do ‘spawning” meaning, they deposit eggs. They are called egg scatterers as they scatter their eggs in different areas. They know when it is the breeding season and the male encourages the female to drop eggs so he can fertilize them.

It is actually very interesting to know the things that they do in order to reproduce. At the same time, unlike other fishes, the process is a bit lengthy and even aggressive. So if you want to learn how they mate as well as the entire process of laying their eggs, then keep on reading!

Preparation For The Spawn

Even before the breeding season comes, the males and females will already exhibit behavior that they are preparing to reproduce. For the males, they begin to have white spots on their pectoral fins. As for the females, their belly area gets swollen.

Both of them also tend to eat more. This usually happens a month before they do the spawning. Usually, they breed around spring even though the weather is not that warm.

If you are going to encourage them to breed, you should take note that the temperature of the water should be around 65 and 75 degrees Fahrenheit.

This is not actually for their benefit, but once the water temperature reaches this stage, the females will know that it is a good time to drop their eggs as the temperature helps the eggs to develop and eventually hatch.

Another trigger to their spawn is the stages of the moon. They usually begin to spawn when it is the phase of the full moon. The females will usually scatter their eggs during the break of the day.

You will know that their spawning time is near when you see the males are chasing around the females. At the same time, the females are sucking on rocks and plants. They will also rub against the sides of their pond. They do this as a way of “cleaning” the space for their eggs. 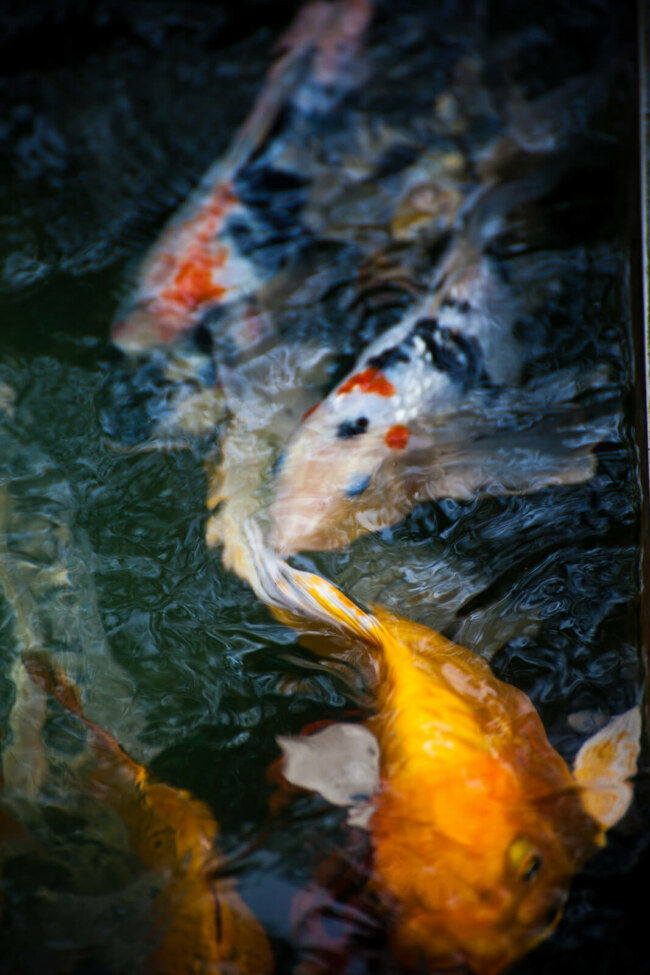 The eggs inside the females approximately take a year in order to fully develop. So for example, the eggs that were formed this spring will be dropped on the next spring.

Keep in mind that the eggs that were produced are not yet fertilized, they need to be dropped so that the males can fertilize them.

Once the eggs are dropped, new eggs will again try to form which will then be dropped on the following year. The peak of egg production is when the females are four to six years old. As for the males, they are already sexually mature from three to five years of age.

There are instances when they participate in spawning when they are younger. However, the chances of successful egg production and fertilization are much higher when they join the spawn at the ages that we previously mentioned.

You might think that the mating ritual of your koi fishes looks like a dance. For some, it is as if the males are harassing the females. What really happens is that the males will bump and nudge the female in order to encourage her to release her eggs.

When it is about spawning, it is actually best when there are two males and one female. In this way, the two males can do the “bump and grind” on either side which will lead the female to drop the eggs easier.

In such a case where there is only one male, you will notice that the male will swim back and forth on either side and bump the female. Once the eggs are dropped, they will then release their sperm to fertilize the eggs.

The “bump and grind” mating ritual that we talked about previously may sound fun, but it can pose a risk to the females. As the males are pretty aggressive when they bump against the females, it may cause injury and stress.

You might see a female losing scales. This also happens to the male. There is no need to worry as their scales will grow back eventually, but this poses a risk as fish with a lack of scales are highly susceptible to more injury and illnesses.

Further, if they get scratched against the sharp and hard edges of the pond, this may cause permanent scarring. Try to manage the water conditions of the pond during this time so that diseases and parasites will not get to your koi fishes while they are still trying to mend their lost scales.

For some owners, they simply cannot stand to see their koi fishes look that way for the sake of reproduction. Therefore, they tweak their pond water conditions so that the koi fishes will not go into breeding mode.

They do this by keeping the temperature of the water low and they also cover the pond for many hours during day time. As we have discussed earlier, the triggers for breeding for koi fishes are temperature and light, once you manipulate those, they will not start a spawn.

Further, there are also some breeders who strip the females of their eggs. On the other hand, they just simply let the eggs be fertilized in a controlled setting.

However, these things can only be done by professional breeders. So if you are just a casual owner of koi fishes, then you can simply stick with manipulating the conditions of the water to be on the safe side.

What Happens After Spawning

The eggs that are dropped are actually sticky and they stick on the surface that they landed on. You will know that the eggs are healthy when they look translucent. In comparison, infertile eggs have a milky and solid color.

After a week since they have been dropped and fertilized, the eggs will start to hatch. As the koi babies or fry are not that strong to swim around immediately, they will hide in the plants and rocks.

What is interesting is that they will live off of the yolk sac that they were attached to when they hatched.

This is the case as the newly hatched fry tend to stick on the sides of the pond. As they cannot swim properly yet, they cannot hunt or forage for food. At the same time, they are trying their hardest to evade predators.

Once their yolk sac is fully consumed, that is the only time that they try to leave their hiding place, and by this time, they have grown a bit larger.

It is good to note that koi fishes can be cannibalistic and might eat the eggs or even the newly hatched fry. Therefore, it is a good idea to separate the eggs or fry once you see them.

More than that, some of the fry who are already a bit bigger will also try to eat the other babies that are still weaker or smaller.

We explain everything about koi fish eating babies and what you can do in this article!