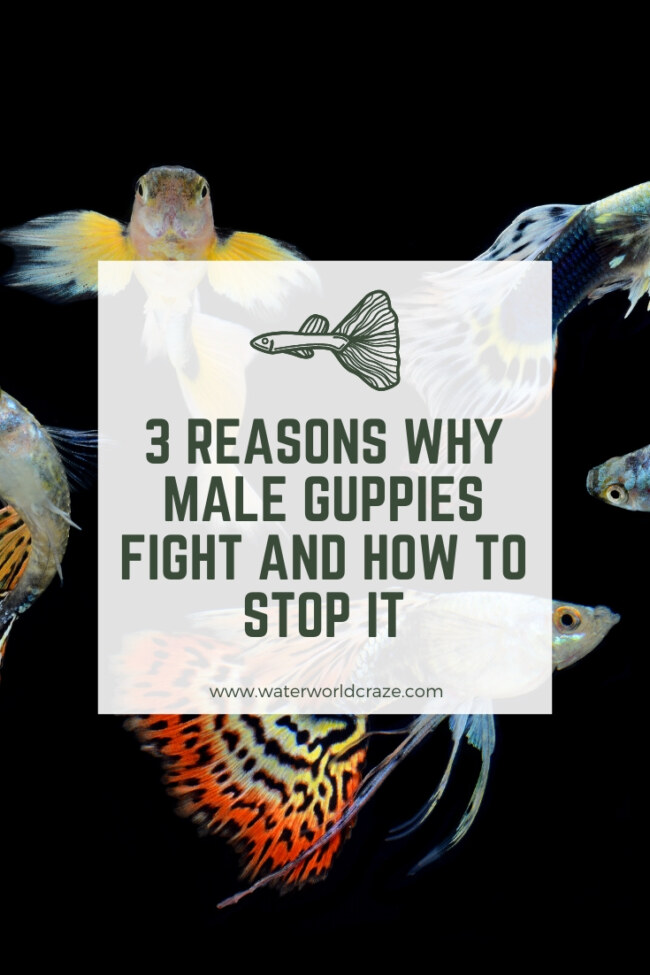 If I have more than one male guppy, will they fight? Male guppies do fight sometimes, though they are usually peaceful. Pay attention if you suspect they are fighting. Guppies that have flesh bitten out of their fins will be more susceptible to sickness.

When you have a small group of male guppies, you can expect them to fight. Just like any other animal, they will want to establish a hierarchy. If there are only a few of them, there will likely be more fighting as there is less competition for the top title.

Thankfully, there are ways to help prevent fighting.

Why do they fight?

Whenever you get a group of guppies together they will need to establish a pecking order. This is common for many social species.

Typical signs of establishing dominance are:

The video below shows what a dominance fight looks like.

Another possibility is that guppies may fight for mating reasons. If you don’t have enough females in the tank it will cause issues.

The acceptable ratio for male to female guppies in a tank is 1:2. If you have two males you will need four females. There need to be options.

Don’t panic if you see the males chasing females around. They’re just trying to get the ladies’ attention and are hoping for a chance to mate.

We explain more about keeping only male guppies in a tank in this article.

There is a standard rule that will help you to decide if you have the right size of tank for your pets. Typically, for every inch of fish you have, you need two gallons of water.

Guppies can grow to be about two inches in length, with some growing to two and a half inches. This means for one guppy you will need at least a 5-gallon fish tank.

As you add guppies to your group, you’re going to want a bigger tank. While many say that 10 gallons are enough to contain about five guppies, you have to remember that your plants and filtration system will take up space.

The ideal size for a school of guppies and all of their plants is a 40-gallon tank like this one.

My male guppies are fighting, now what?

While it’s possible your fish are only beating their chests to show who the big fish in the tank is, there is a risk of harm. If you see your male guppies chasing each other around take a close look at all of your fish. Specifically the fins and tails.

If there is damage to your fish’s fins or tails then there is a much higher likelihood of them getting sick. So pay attention to avoid fin rot and other illnesses.

Sometimes it’s helpful to have an extra fish tank on hand if you’ve got some fish that are behaving badly. If you’re adding guppies to a new tank, they may be more aggressive until they figure out who’s the boss.

In this case, it’s sometimes easier to separate the fish causing the problems from the others. There’s a chance the fish will eventually calm down. The rest of the guppies will be able to figure out the pecking order (hopefully in a less violent way).

Once you put the aggressor back in the tank he’ll probably find it easier to understand where he sits with everybody.

How do I stop them from fighting?

Give the little guys a place to hide

Guppies prefer to hang out at the top of the tank. If your fish are bickering, give them a place to retreat to. Keeping plenty of floating plants gives them that space.

Look for live plants such as this Java Fern. If you’d like, you can go with plastic plants like this Amazon Sword. You can even go for a mix of live and plastic plants for your pets.

Some other plants to consider are:

Your guppies will be more peaceful if they have some place to hide. The more plants you have with fronds near the top of the tank, the happier they will be. 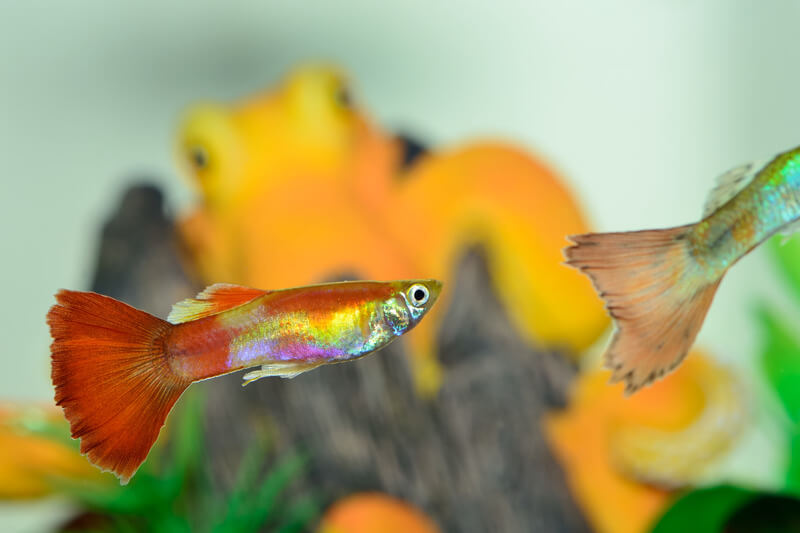 Add more males to the group

Small groups of guppies tend to have bigger problems with fighting. The smaller the number of fish the more often the weaker, or less dominant, males will be bullied. It might seem amusing at first, but it can be quite stressful for your fish.

The more males you add to the group, the more that aggression will be spread around. The dominant fish will be able to pick on many other males and thus there will be less major targets.

You’ll still have to watch, though. If there is any real damage to the fins you may end up with problems.

Add some females to the group

Guppy males are driven to add to their species. They like to mate. If you put some female guppies into the tank they will be distracted from fighting.

There might be more of a show as they try to convince the females they are the best, but there will be less real fighting. Just make sure that you have enough females.

Remember the ratio. The more females that are around, the more distractions there are. This may mean you have to get a bigger tank, but it’ll be worth it in the end.

Get a larger tank

If the guppies are forever in each other’s faces, they are naturally going to fight. Like any other animal, they need room for themselves.

A small tank may mean squabbles over territory and that’s something that can easily be avoided.

We explain more about the dangers of keeping guppies in a tank that is too small in this article – Read it here!

Why do female guppies fight?

Just when you thought you had it figured out, you suddenly see a girl fight break out in the tank. More often than not it’s because of the males in the tank.

Bullying in the tank

Female guppies can be choosy about who they want to mate with. The males spend a lot of time chasing them, wanting to mate as many times as they can.

Usually, the males will pester the smallest female. The male will be completely focused on the end game and it will take a lot of time and energy for the female to fend him off. She will spend less time eating and less time bonding with the other fish.

She may even wander out into territories she would usually avoid.

On occasion, a rejected male will sometimes try to mate with the female against her will. Naturally, she gets pretty stressed and grumpy about this. The stress may affect the rest of the females in the group and fights could be the end result.

If you see your females attacking your male guppies, you should read this article!

Picking on the pregnant fish

Like the males, the females have their own pecking order. If one of the smaller, less dominant fish gets pregnant, it’s possible the top fish will pick on her.

This can be avoided by trying to purchase females that are all the same size. There will be less obvious dominance and less fighting.

You might also want to read these two articles if you see that your female guppy gets harassed:

How do I prevent female guppies from fighting?

The best way to do this is to have a group of only female guppies. With no males constantly chasing them around, they will be able to focus on eating and looking after themselves.

Also, if there are no males, nobody is getting pregnant. That means the dominant female won’t really have any interest in beating up the smaller fish. The females get along much better than the males do.