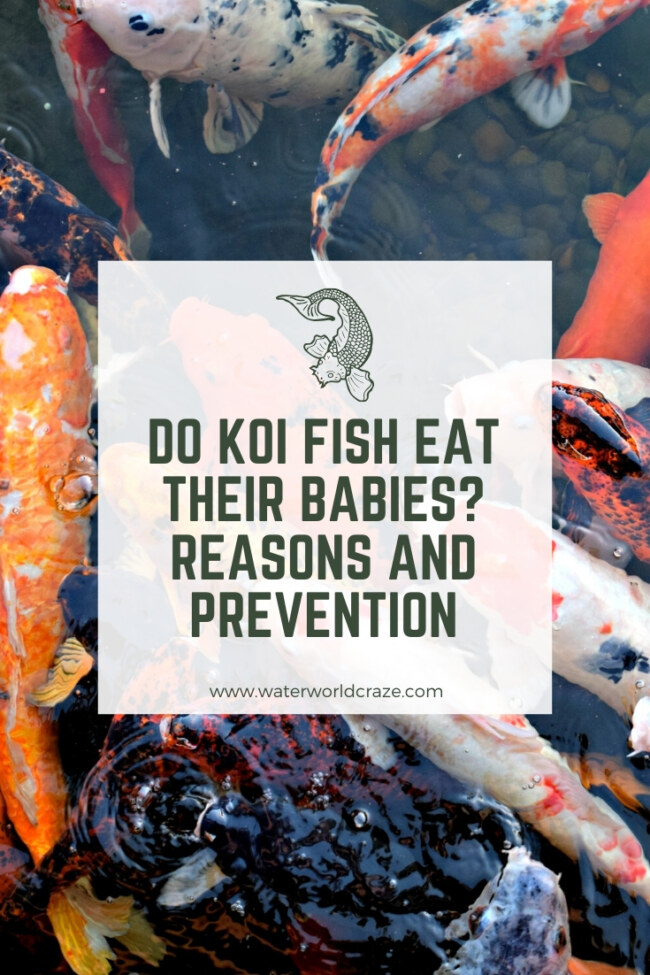 Koi fish are known for being calm and relaxed, fiercely loyal, and an overall joy to have. But due to their immense size and powerful jaws, they have gained quite the reputation for their appetite. This leads a lot of people who own koi to wonder if koi will eat smaller fish, especially their babies.

The fact is that koi will most likely eat their babies, but not because they are aggressive fish. The reason for them eating their young is because eggs and tiny fish tend to resemble insects. But they will not eat smaller fish once they start to look like actual fish.

So, you won’t have to worry about koi posing any issues to your other fish. In this article, we’ll discuss why koi eat their young, how this might be beneficial to your tank, and other behavioral habits that koi display.

As we have established, koi are known for being laid-back fish. So, the thought that they could be capable of eating their own young might be astonishing. And to some, it could be a potential symbol of their aggression.

We will get into whether or not koi can become aggressive in a later section, but as for now, we will address why koi eat their babies.

Why Do Koi Eat Their Babies?

They might also be mistaking the eggs for other things such as live feed, insects, and basically anything else that your koi like to eat.

This is not something that you should be worried about. Koi are not eating their babies due to aggression or not wanting their babies to survive to adulthood. The simple fact of the matter is that they probably don’t know!

The good news is that, when your fish fry starts to grow and look much more like their adult counterparts, the other koi in the pond will leave them alone. And koi are known to grow extremely quickly in the first few years of their life, so it won’t be long until your fish grow.

Why This May Be a Good Thing

Here’s something you may not have considered before: your koi eating their babies and eggs might not actually be a bad thing at all!

It might be extremely weird for us humans to think about- eating your babies- but it’s completely normal for many different breeds of fish.

Especially since it’s virtually impossible for them to be able to differentiate their tiny babies from the food that you will likely be feeding them, as both look very similar.

If you’re not particularly looking to breed your koi or have a lot of koi in general, it might be a blessing for you to have your koi fish eat their eggs.

Female koi fish can carry millions of eggs at once- 100,000 for every 1 kilogram. The bigger the fish is, the more eggs she will have. It’s even possible for your female koi to be carrying millions and millions of eggs. And she’s going to be laying all of them every mating season.

While the male fish might not necessarily be fertilizing every single egg that the female lays, you can still expect the number to be really high up there. This could spell disaster for you when they all hatch and if they do survive to maturity.

Can you imagine taking care of thousands of fish at once in a pond that is way too small for all of them?

However, when your koi fish eat their young, you won’t have to worry about having all these fish swimming around in the small pond in your yard. The video below shows how that could end.

This is definitely not a bad idea if you’re not looking to have as many fish around. There are even some people who said that they never have seen any baby koi in their ponds- which either means that all their koi are of the same sex or the koi have most likely eaten them all.

But it is possible that you won’t want your koi to eat their babies as much. Here’s what you should do in that instance.

How to Prevent Koi From Eating Their Babies

With all that being said, there is a chance that you are perhaps breeding your koi and want to prevent them from eating their babies as much as possible.

If you notice that there are eggs in the pond, one of the best things you can potentially do is keep the eggs and fry in a separate aquarium or pond.

It is unrealistic to expect that you will be able to keep all the eggs, but if you especially want to be able to prevent the potential of too many or all of the eggs being eaten, then it might be worth separating them.

If you do choose to go this route, then you may not want to take all of the eggs you can find; only choose the best-looking ones because it will be impossible for you to take care of as many eggs as you can find in your pond.

Another thing you should do is keep a lot of plants in the tank. Koi tend to lay their eggs near plants and other coverings, which will eventually help to keep the fry hidden. The more plants there are to hide the eggs, the less likely your koi will be to eat all of them.

Will My Koi Eat Other Fish?

Will I be able to keep other fish with my koi fish? Can they stay in the same pond as other fish? Is it possible for the koi to become aggressive and attack the other fish?

These are some of the most popular questions that people ask when it comes to owning koi fish.

The basic answer is that you have nothing to worry about. If koi fish and other docile fish ever eat the other fish in the tank or pond, this is due to the fact that they have mistaken the fish for insects, live feed, or other food that they would normally eat.

Koi can, indeed, stay in the same pond or tank with other fish. The most popular breed that people choose to keep with their koi are goldfish. 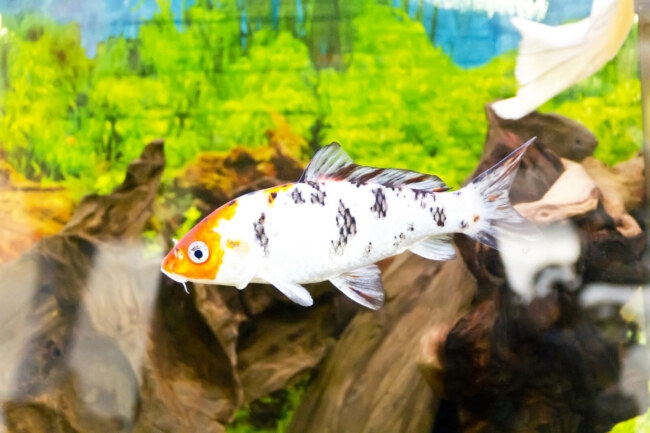 The two breeds are extremely similar, especially in terms of behavior and what they can eat, so if you want to keep more than one breed, it’s a good idea to consider goldfish.

Once again, your koi will NOT grow aggressive and attack the other fish in your tank. They are well-known for their calm and laid-back attitude. Koi are happy to live with other fish, and they are even known to fare well if the tank or pond is particularly overcrowded.

You do not need to worry about how your koi will react to the other fish in the tank. If your other fish are big enough to not potentially be mistaken for food, then your koi will generally leave them alone.

So, you will not have anything to worry about when it comes to keeping koi fish. They will not become aggressive and eat the other fish in their tank.

Other Information to Know About Koi Reproductive Habits

The eggs of koi fish are known for being very small and translucent. The color may be anything between white, yellow, or green. Koi typically will lay their eggs on plants, mats, or other similar parts of the pond, so this is where you will be able to find them.

How long do koi fish stay pregnant for?

A female koi fish will carry her eggs for several months before the mating season. They typically carry thousands of eggs starting at three years old. Then, when she finds a mate, she will lay the eggs throughout the pond, and the male will follow her and fertilize the eggs.

Koi are never ‘pregnant’ and they do not have live babies.

Koi will grow the fastest when they are young. It is typically said that koi can grow between 4 to 6 inches yearly before they reach maturity. Afterward, they will plateau and grow more slowly. Baby koi fish grow at a fast rate and will grow a lot within the first couple of months.

Overall, it is absolutely possible for koi fish to eat their babies and their eggs. However, the reason for this is not because koi are aggressive or because they will attack your other fish; it is because they will mistake the eggs and baby fish for insects.

This can be a good thing for multiple reasons, overpopulation in particular. But this is not a behavior you should be worried about and it will not impact your ability to have other fish in the tank as well.