You will often find queries on fish keeping forums about guppies changing their gender. Many swear that they were sure that they bought fishes of a particular amount of sex ratio and it turned out to be different during breeding. So, can male guppies really turn into females?

While it is rumored that livebearers like guppies can change sex, it is not definitely so. Some male guppies might be underdeveloped and reach maturity age late. This is why they can look more female than male. Even in this case, they do not change their sex.

But how do we differentiate between male and female guppies? Are they really good at hiding their genders?

Sex Differentiation Between The Male And Female Guppies

The reason why people initially get confused about the sex of their guppies is that they compare noticeable physical features such as their size and their caudal (tail) fin.

However, these traits are not sure-shot ways to know if you have a male guppy or female guppy. In some cases, males reach maturity late and will look similar to females. And in some cases, females will look as vibrant and slender as a male. This can confuse a lot of beginners.

Hence, they are not trying to hide their sex. They are just not identified properly by the observer or are underdeveloped. 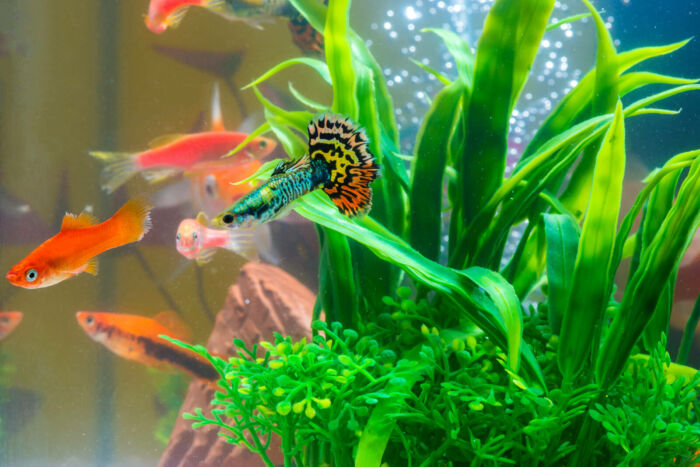 Guppies are one of the livebearer fish. Livebearer fish are not typically researched enough in quite recent times.

According to some research papers, they cannot change their sex and it is mostly the males, which are under-developed, that cause such confusion. But in other cases, there are few research papers that denote slight changes in our understanding of sex differentiation.

In conclusion, some research paper states that sex selection in livebearers cannot be defined in human terms and individual cases have to be examined to come to a definitive conclusion. This means that there is a possibility of having more than two sexes in the livebearers.

Interesting research has been found on swordtails – another livebearer. It was found that in the absence of males in a tank, an older female swordtail can mimic the features of a male and start resembling it.

It is thought that either they do it for the younger females to have more chances at mating with other males and distract the males in the tank from themselves. There are things that science hasn’t studied about this topic yet. But nonetheless, it is fascinating!

Also, it is interesting to note that swordtails do have an extra chromosome. This can help them switch their gender or at least look more feminine or masculine while being either of the sex. But once a fish has ovaries, it is impossible for them to turn into a male.

Carrying Forward A Legacy By Milt

Most of the confusion surrounds around male guppies. If one has not observed a gonopodium at first, they assume it to be a female, only to discover that it was a male after several months.

These males could be swimming around peacefully with other females and breed when they reach their sexual maturity.

But what is more fascinating is the female guppy’s retention of milt. It was found that a female guppy can use one episode of fertilization from one guppy and use it to reproduce for 10 months.

Female guppies also have a longer lifespan than that of males. She can carry on a legacy of a dead male guppy for at least a few generations!

Do not be surprised if you find your female guppies to be reproducing even in the absence of a male. They do not necessarily need multiple encounters to breed.

Once fertilization is done successfully, a female will breed on its own. This is useful information for people who want to breed guppies and control the population in their aquarium. 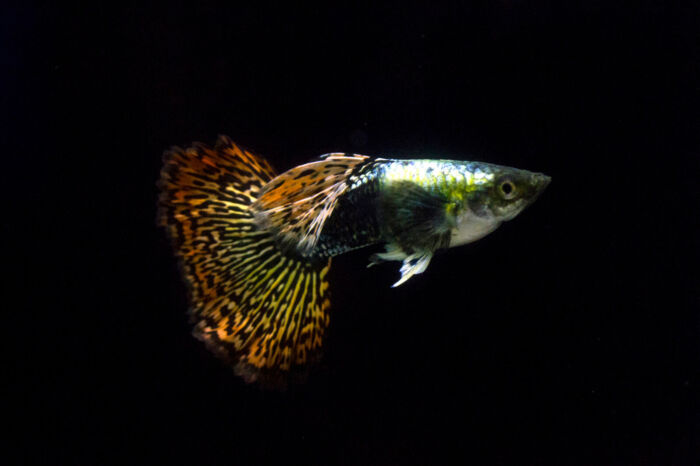 Other Fishes That Are Known To Change Their Sex

Changing sex is possible if a fish has both male and female reproductive organs present. Such organisms are classified as hermaphrodites.

There are around 21 families of fishes that are natural hermaphrodites. Snook, Clown Fish, Wrasse, Angelfish, Grouper, Goby, Parrotfish, Sea bass, and Anthias are known to be hermaphrodites.

However, in most cases, they are not true hermaphrodites. This means that they will have partial or incomplete reproductive parts of both male and female.

Sea bass is one of the examples of synchronous hermaphrodite, meaning they have fully developed male and female reproductive organs. However, they cannot self fertilize.

One might ponder if seahorse is a hermaphrodite in nature. The answer is no, they are not. In humans, females bear young. But in seahorses, males bear their young.

The male seahorses are made to bear the young, not become female and then bear their young. Hence, no sex-change event happens in seahorses.

Clownfish And Wrasse Hierarchy And Sex-Change

When it comes to clownfish, they do not joke around and take the death of their dominant female in their group very seriously.

It is said that all clownfish are born males. The hierarchy in clownfish is dominated by one maternal figure. When the maternal figure dies the other dominant one, the second-in-charge, takes on the new leadership role.

They have to transition from male to female to be coroneted as the new ‘queen’.

The right-in-command male is usually a dominant male and gets more opportunity to breed with the ‘female’ fish of the group. The rest of the males do not interfere in between this couple.

They breed and the male guards the eggs till they are hatched. Once this ‘female’ dies, the right-in-command starts to eat more food and transition into a female by gaining weight.

Then, the next most aggressive and dominant male gets to be the right-in-command and the cycle continues.

In Wrasse, the brunt of sex change is often taken by a female. When the dominant male in their group dies, the other dominant female will turn from female to male and lead the way.