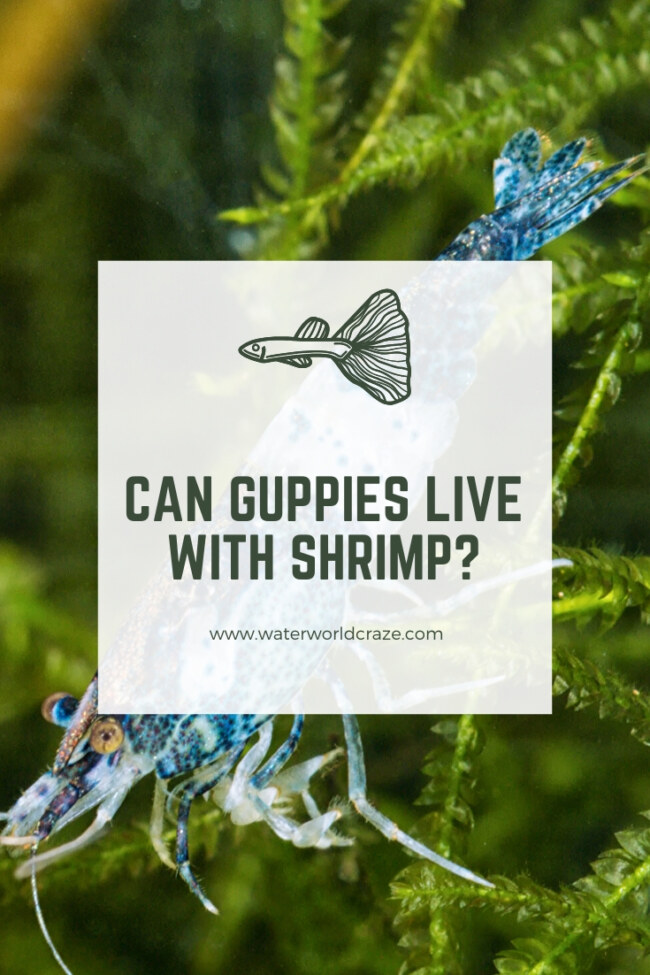 Stacking a fish tank is difficult because of the vast amount of options and questions that you need to ask yourself. Which fish get along and do their environments match?

Can guppies live with shrimp? Guppies and shrimp can get along, but it will take some planning on your part to make that happen. In their natural habitat guppies eat shrimp. Fish as a whole will pick on those that are smaller.

While it might seem pointless to keep them together you can work around the food chain by getting the right variety. Read further to understand guppies and shrimp and some tricks to keep your aquarium peaceful.

Can guppies and shrimp life together?

There are 300 varieties of guppies and shrimp making them question if shrimp and guppies living together difficult because it is a case by case basis.

Whether they live peacefully together depends on size, the type of shrimp, and the environment in which they live.

Fish are opportunistic so even if you feed your fish they will still prey upon those who they see as food. It is just in their nature if they see the food they will eat it. Instinctually they are uncertain when they will be able to eat again.

This is especially true for shrimp fry. For the guppy, shrimp look like a tasty little treat. In the wild shrimp are on the guppy good chain so any aggressive behavior between the two is more than opportunistic, it’s a cat hunting a bird.

So why keep shrimp and guppies together period? Well, guppies aren’t one of the most popular fish for no reason. They are colorful and delicate fish.

Shrimp also come in a variety of colors and shapes, but they also play an important part in the ecosystem of your tank.

Shrimp are naturally scavengers eating whatever is left over, some even eat algae that naturally forms. They help keep your tank clean.

How to help your shrimp thrive with guppies

There are few tricks that you can try to keep your shrimp population up. Mostly you will need to purchase shrimp that are the right size and provide them ways to limit contact with guppies.

The main thing to concentrate on when getting both guppies and shrimp is the size. If your shrimp are on the smaller side they will be attacked by the guppies. Along the same lines if you go for the larger guppy varieties they will be more aggressive.

The larger guppies are rarer so the average size is 1.5-2 inches. Pet shrimp size varies, some can be as small as 1 inch while others can get up to 6 inches. It’s best to get shrimp that will be an equivalent size to your guppy so around the 2-inch mark.

Anything smaller and you won’t have shrimp for long. 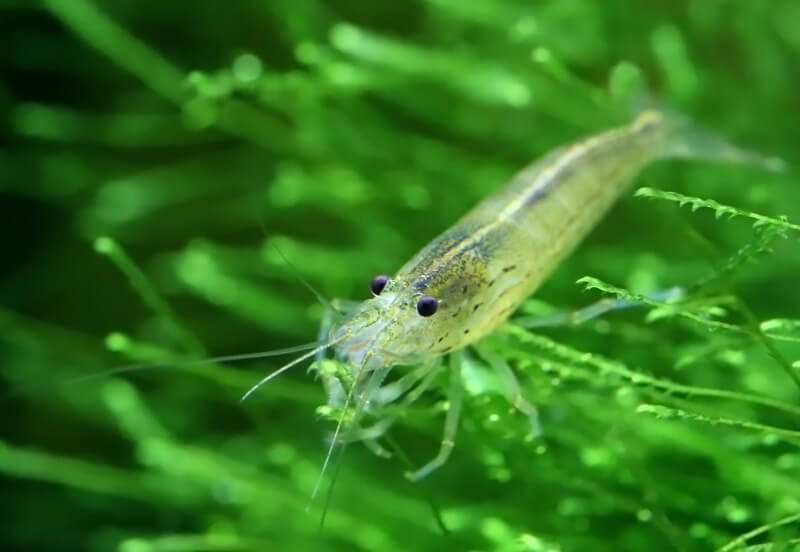 Fish can be bullies and a high number of one kind, in any case, will want to make sure the other fish know the tank is THEIR kingdom and if they have to use tail slaps to make the others understand, so be it.

In this case, the guppy is the aggressor. Adding more numbers to your guppy’s population will instill in them this egocentric idea and your poor shrimp will endure the most of it.

Purchase more shrimp than guppies and the guppy will be less inclined to pick fights.

Give your shrimp places to hide

Even if you get shrimp of comparable size to your guppies might still pick on your shrimp. That’s why it’s important to create places where your shrimp can hide.

A lot of moss and plants on the bottom of the tank so that if the guppies are in a rowdy mood your shrimp has a place to disappear.

Some things to understand about guppies and shrimp

Before getting your shrimp and guppies you need to understand what their habits are and some odd behavior both might exhibit. Knowing how they eat and wherein the tank they are naturally drawn to help prevent any hostile behavior between the two.

Where do these two fish dwell?

Fish have different levels in the tank that they like to stay in.

The guppy is a top to mid-dwelling fish, in fact, if they are at the bottom of the tank for too much time it is an indicator that something is wrong.

Your shrimp are typically bottom-dwellers that feed on the nasty products that nobody else wants – sounds harsh, but that’s the way it is.

Actually, this is great, cause it keeps things clean.

The guppy sometimes will go down to the bottom of the tank when they need to sleep, but as long as you keep plenty of hidey places for your shrimp they really will not have a lot of interaction.

Understand how guppy’s vs shrimp eat

Shrimp are bottom dwellers that eat smaller pieces of algae and the leftovers from other fish. Which is hard with guppies who will eat all that they can.

Make sure your shrimp are getting enough food, your guppies and other fish can eat all of the food at the top leaving your shrimp to start starving at the bottom.

This might cause them to go to the top of the tank where other fish will look at them as food. If your guppies are snatching food out of their mouths try putting some food in the tank when your greedy ones are sleeping since shrimp constantly scavenge for food. 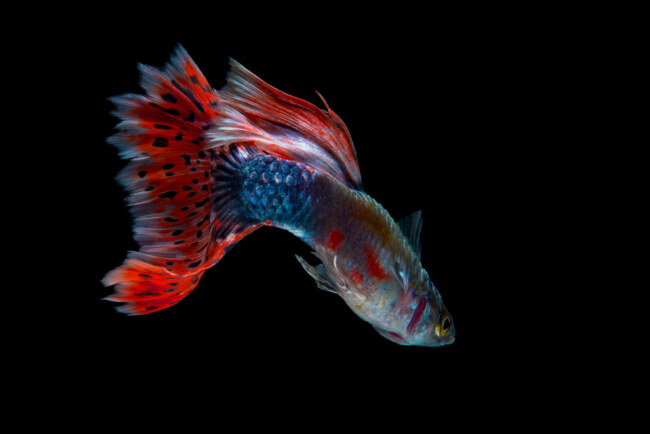 When your shrimp will attack your guppies

Even if you do everything right guppies and shrimp will exhibit some odd behavior that you really can’t do a lot about. This information is so that you are aware and don’t freak out if it happens in your tank.

Traditionally guppies are the aggressor in relationships with shrimp. But then you walk into the room at night and after turning on the lights you see your shrimp poking at fish sleeping at the bottom of the aquarium or even eating them.

It might appear that the shrimp is the aggressor, but it isn’t in their nature.

Shrimp are scavengers who feed on basically anything. That means dead plants, algae, uneaten food, and anything dead or about to die. They roam around the bottom of the tank looking for this substance.

When they come across fish at the bottom of the tank they will do a little poke to see if it’s alive. If the other fish is healthy they will swat the shrimp away and it will move on. But if the fish is dead or near death and doesn’t respond that means it’s food.

You will not be able to breed shrimp while you have guppies in the same tank. If you spot shrimp fry in the tank try taking them out and placing them in a separate aquarium or breeder box might give them a chance to survive.

Most likely though the guppy will eat them before you are even aware that there is any shrimp fry. It’s not just adult guppies that eat young shrimp, guppy fry will also go after the baby shrimp if they are small enough.

In fact, brine shrimp is one of the healthiest foods for guppies you can get. Read more on that here!

Varieties that work well together

When combining shrimp and guppies you need to go for shrimp varieties that are a comparable size to the guppy who averages out to 1.5″-2″. If you purchase shrimp that is below this size you just bought your guppy some expensive food.

Shrimp that work with guppies:

Ghost shrimp, also called glass shrimp, are native to the Gulf of Mexico. Technically they are feeder fish, ones that you buy to feed other fish, however, they can also be kept as pets.

While in the wild they can reach four inches in captivity they will only grow to be around 2 inches which are perfect for living with guppies.

The Amano Shrimp is native to Japan, China, and Taiwan. One of the best things about the Amano is that they are a great algae eater. In the wild, this shrimp lives in large groups so get at least three so they can be happy.

The Amano Shrimp can get up to 2″-3″ in size making them slightly bigger than the guppy. A word of caution for those who have an open-top tank, these types of shrimp have a habit of pulling off elaborate escape routines.

The Bamboo shrimp are a 2″-3″ and are native to Southeast Asia. Another name for this species is the Wood Shrimp. They are kind of a flamboyant shrimp that will make movements with their fans while they are feeding.

Instead of savaging on the bottom of the tank they filter feed. These are a type of fish that eat by straining mater and food particles from the water bypassing the water over their feeding fans in the high current while stationary.

They need a strong flow for this process. If you are worried that they are not getting enough to eat angle the food at the beginning of the current in front of the Bamboo shrimp.

Keeping guppies and shrimp together isn’t impossible, but it does take planning on your part. With the environment for your tank, the type of fish, and when you introduce everyone to each other.

Watch out for any aggressive behavior from your guppies, but follow the above advice and your aquarium should be a harmonious place.