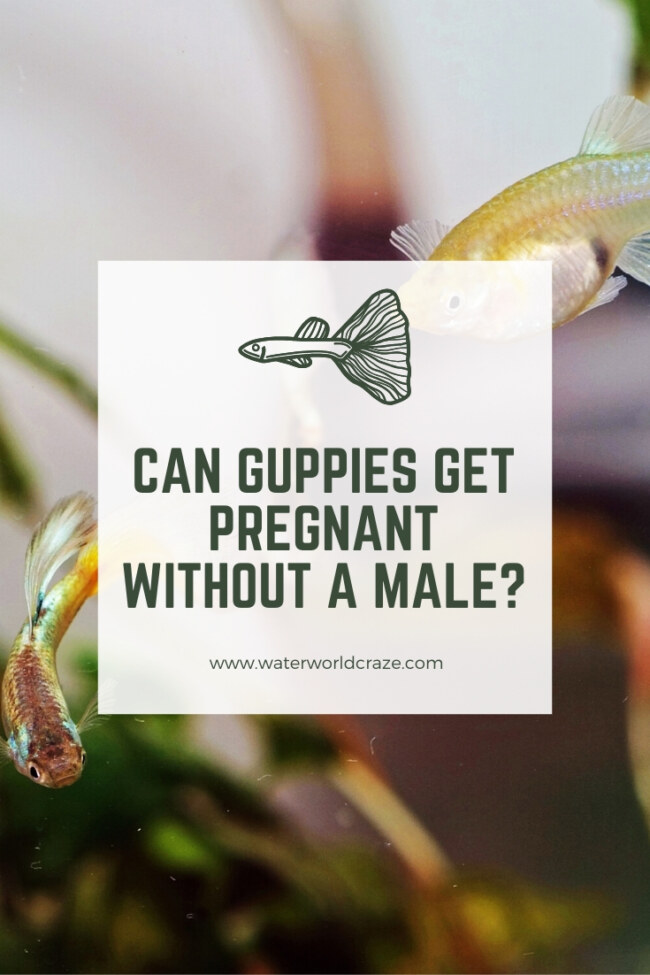 Have you noticed that your female guppy has given birth but you did not keep her together with a male guppy? This will have you wondering how she became pregnant and whether this process happened on its own. This is a thought that a lot of fish owners have.

So, can guppies get pregnant without a male? The answer to this question is no. While it can appear that your female guppy became pregnant on their own, they can actually store sperm from a male guppy. This means they will have mated with a male guppy and stored this sperm for up to 10 months.

Let’s learn more about how female guppies can get pregnant and the signs that you should look out for.

Can Guppies Get Pregnant Without A Male? Here Is The Truth!

Like a lot of species, a male guppy is required for a female guppy to become pregnant. Although, it is easy to understand why many people may think guppies can get pregnant without a male.

It has been found that a female guppy is able to hold sperm from a male guppy for up to 10 months. More research is needed, but there is the possibility that they can store sperm for longer than this.

This means that they can be away from male guppies for a long time before we realize that they are pregnant. This can make owners wonder whether it happened on their own.

But, as they can hold the sperm for extended periods of time and then become pregnant, they can almost choose to make young guppies.

They are able to do this with different sperm at the same time and they can choose the best time for fertilization. This means that they can be pregnant for several months in a row, with the result being you suddenly have a lot of guppies!

Guppies are known as livebearers. This means that the female guppy gets pregnant from a male guppy and the egg inside develops into a fish. The gestation period is around 28 days. Although, the female guppy may still be pregnant if the water temperature is too cold.

Stress can also delay the process of birthing the young guppies. You can expect a guppy to have anything from two babies up to 200 at one time.

Being able to store sperm has many advantages for guppies and their survival in the wild. Females typically live longer than males do; around two years compared to just three to four months.

This means that female guppies can ensure the survival of the favorable genetics of a male after they have died. They can also choose to populate in different environments and continue guppies inhabiting that environment. 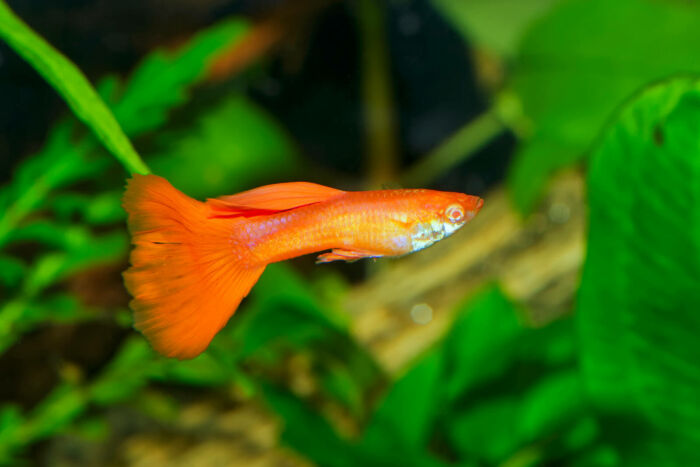 How to Identify a Female Guppy

Today, it is not so easy to tell a male and female guppy apart. Modern breeders have made it difficult to quickly tell a female guppy and it is not all down to color. Some features you should look for to tell if a guppy is a female include its shape and size.

Females to tend to be bigger, but the caudal and dorsal fins can be smaller than a male guppy. Other ways to identify a female guppy include:

How to Know if a Female Guppy is Pregnant

You may be wondering how you can tell if your female guppy is pregnant. There are some common signs that you can look out for. You will find those female guppies have a gravid spot. This is found underneath and it is a dark coloration.

When they are pregnant, you will notice that this gravid spot is darker in appearance. This can be maroon or black color. It will also appear larger in size and grow as a stomach would. There is the possibility that you can see the young fish growing through the guppy’s skin.

Another sign that a female guppy is pregnant includes the abdomen becoming square in shape. This indicates they may be about to give birth. Of course, this change in body shape is due to the fry growing.

(By the way, if you see that your male guppy looks like it is pregnant, this can be a sign for disease. Read more on bloated guppies here!)

Also, look out for signs of behavioral changes in female guppies. This can include seeking places to hide in the tank or a change in their eating habits. These are signs that a female guppy could be ready to give birth.

In addition, she may start to rub against plants in the tank and even shake.

An important thing that you should do when you discover that your female guppy is pregnant is to ensure she is not stressed. This can happen if there are too many other fish around. It may be best to use a breeding tank.

This will allow your pregnant guppy to enjoy her own space and ensure stress does not stop her from giving birth. You can move a female guppy into a breeding tank toward the end of pregnancy.

Just make sure to remove her again so avoid the female guppy eating the fry when they are delivered. They are very small and other fish will want to eat them too. It is best to separate them until they are bigger.

Can Guppies live in the same tank as other fish? You are able to keep a variety of fish, which can include guppies. Other fish they can live with include corydoras catfish, dwarf loaches, Endler’s livebearer, molly, neon tetra, and glassfish.