Guppies are truly fascinating with all their colors and patterns. This is one of the reasons why breeders love to breed this fish since not only do they produce such beautiful fry, but they are also easy to breed.

What if you want to take your breeding game to the next level and breed guppies with other fishes?

Guppies can breed with other fish. However, this is highly discouraged as the behavior of hybrid fishes are unpredictable. Also, the fry may be weak and can die as this does not naturally happen in the wild. On the other hand, there are some fishes that were proven to be compatible with guppies.

If you are considering breeding your guppies with your other fish, then this is the article for you! On the other hand, if you are worried that your guppies might get accidentally pregnant with other fishes in the tank, then keep on reading to see what can happen.

Can Guppies Breed With Other Fish?

Technically speaking, yes, guppies can breed with other fish. But this does not happen intentionally. Male guppies will always be inclined to think that they should only breed with female guppies. The same goes for the females.

This is also primarily the reason why guppies are so successful in terms of breeding. Their DNA dictates a certain blood strain in terms of choosing breeding partners. This may not guarantee against inbreeding, but it surely helps against interbreeding.

So, what happens when you notice that your female guppy’s fry is inherently from another fish, for example, a betta? These can be some of the reasons:

As you might have noticed, the reasons that we stated are extreme conditions. This goes to show that if you do not force your guppies to breed with other fishes, then they will not do so.

Guppy Logic When It Comes To Breeding

Let us go into the minds of your guppies for a little while to further widen our discussion. Even though guppies breed like crazy, they are still motivated by their blood strains. This is the reason why guppies tend to breed with their own “breed.”

For example, the Poecilia reticulata which is the common guppy will choose not to breed with a Poecilia wingei which is an Endler guppy. The reason behind this is that they want to keep a pure-blood strain.

This thinking does not mean that some guppies think that they are elites, but frankly, it is for the survival of their breed. Breeding with their own kind will result in healthier and stronger fry.

On the other hand, scientists have observed that every once in a while, guppies will breed with another breed of guppies as a process of blood infusion. This process is done as some kind of a test to see how good their blood strain is.

As we have mentioned earlier, guppy interbreeding is not really considered a taboo. However, it is highly discouraged in order to preserve the quality of the guppies that you have. Here are some of the effects of guppy interbreeding.

There are a lot of breeders who claim that when they tried breeding their guppy with other small fishes, the fry is usually weak. This is even the case when they used breeder boxes or separated the fry.

The weak babies were also reported to refuse food. Therefore, they cannot sustain themselves in order to survive. There are also some breeders who shared that the fry will even fight among themselves.

This is bad for the littlest baby as surely he or she will lose the fight. In the event that they do survive, it will just be for a while. For some unknown reason, they just end up dead even though they are in a separate tank.

In the event that the hybrid babies survive, they will surely be bullied in your community tank. There is a slight chance that this will not happen, but researchers are veering towards the negative.

The reason behind this is that neither fishes in the tank consider them as their own. It is as if there is a new type of fish that has been added to the tank. Therefore, the other fishes will be wary against the hybrids or even aggressive towards them.

Usually, guppies are not aggressive fish as we explain in this article.

Stress can be felt by all parties which are the guppies, the other fishes living in the community tank, and the hybrid babies. The long term residents of the tank may feel different towards the hybrids and they will feel that they will need to compete for more food and space.

The same goes for the hybrid babies, as they feel unwelcome, it will be harder for them to eat peacefully and even forage. Even when they try to hide, other fishes will still be aggressive towards them.

Therefore, if you plan on breeding hybrids, then they should be housed in a separate tank. In this way, all of your fishes will not be stressed. 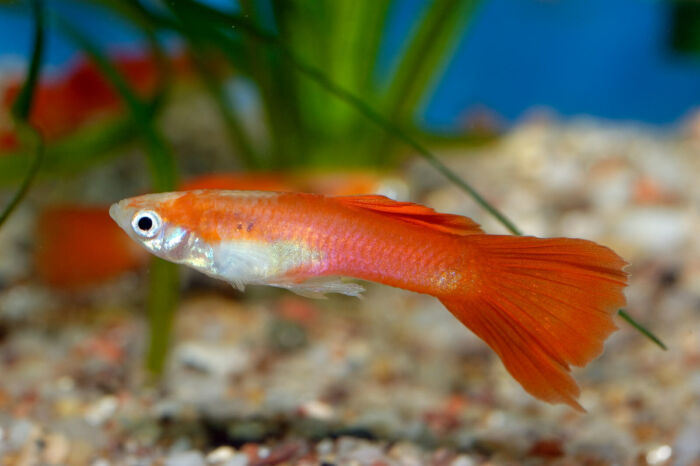 This is only applied if you are still planning to house the hybrid babies in the community tank. Even though they share half of the blood of the fishes that are present in the tank, the males and females will still refuse to breed with them.

Further, even the hybrids may or may not refuse to breed with their own. The reason behind this is still unsure, however, researchers theorize that this is due to the inconsistent blood strain.

The other hybrids also detect this, so they are unsure as to whether it is okay to breed with another hybrid.

Fishes That Can Breed With Guppies