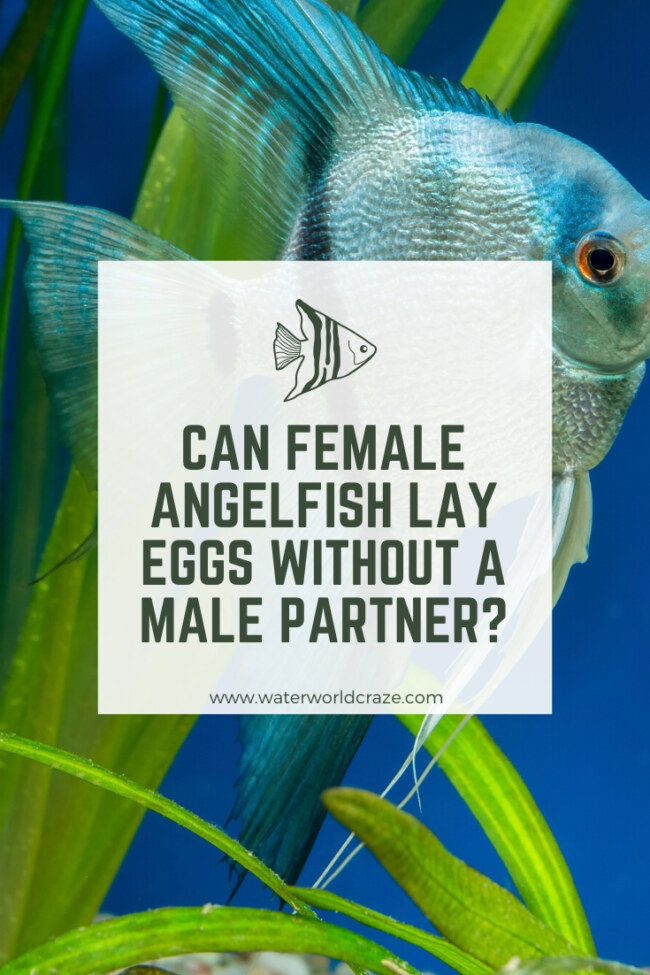 Angelfish not only have an interesting personality but an equally intriguing breeding method. There is practically no way to tell if an angelfish is a male or a female until they mature enough for mating and spawning.

But how does it affect their reproductive cycle? Will female angelfish lay eggs without a male?

Yes, female angelfish will lay eggs without a male. They will lay it vertically on anything they deem fit – a piece of wood, filter, decorative items, and even on the glass of the aquarium. They will guard it and fan it even in the absence of a male and if they do not fertilize, they may eat it up or forget about it completely.

Now, how often would a female angelfish lay eggs in the absence of a male? What should you do with the eggs if there are no males to spawn? We will answer all of that and everything in between.

It is difficult to tell apart which angelfish is a male and which one is a female. This is why people are generally advised to breed them in pairs of even numbers.

If you take an odd number of fishes, one of them can be left lonely or bullied by others. They generally reach their sexual maturity between the age of 6 to 12 months.

They are generally known to be monogamous and often find their ‘one’ in their younger years. This is one of the reasons why it becomes difficult to breed two adult angelfish, as they are not always receptive to a new partner.

However, there are always exceptions where they give in to their condition and mate with any new partner you introduce for them.

It is not always a pretty picture when you witness their mating ritual. Unlike with us humans, there is no gentle declaration of love with a quaint commitment to each other.

They chase each other and get into a fight before they get into the idea of spawning their young together. This is the time when you get to see which one is a male and which one is a female.

Differentiating Between Male And Female

A male angelfish might have a larger, high, and more noticeable crown whereas the female will have softer features. This is not true in every variant of angelfish.

Also, females are generally shorter, rounder and wider than the males. Next, look at their breeding tubes which would be just under their fin. This will be visible more prominently during spawning.

A female has a blunt and shallow breeding tube whereas a male will have a pointed breeding tube. The differences are very subtle and it will take a trained eye to catch a difference in a second. A female angelfish will lay eggs even if she doesn’t find a male to complete the process. 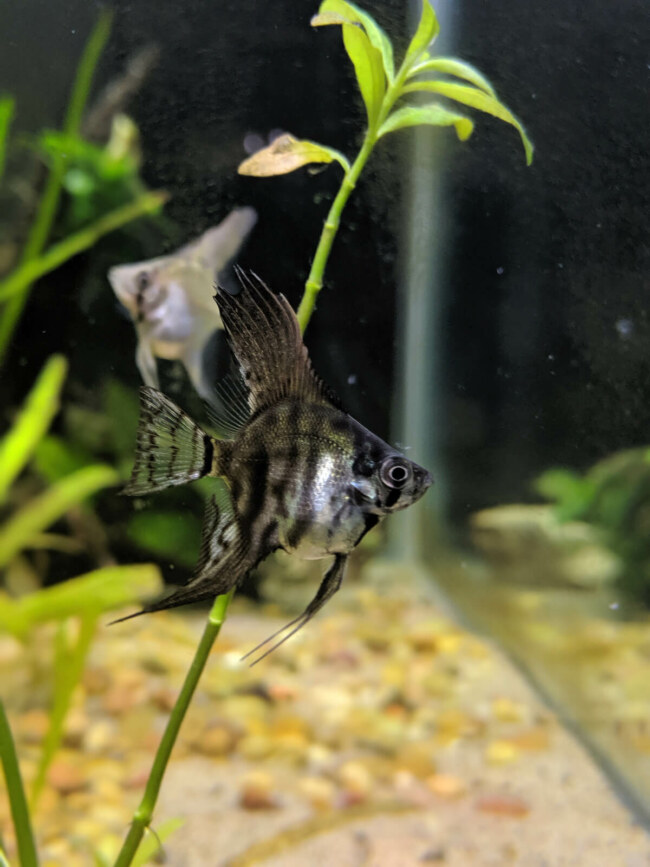 The Fate Of Eggs – With And Without A Male

Generally, a female angelfish will be swelling with the eggs she will lay in the beginning. If she has a partner, she will spawn every 7-10 days. If she doesn’t have a partner, it gets a little difficult to predict how many times she will lay eggs.

It is observed by some pet parents that a singular female angelfish will lay eggs every 2 weeks. The range will vary from fish to fish.

A single and beautiful angelfish who has just laid eggs will fiercely protect it and fan it. It is in their parental instinct to do so even in the absence of a male partner.

This will continue for a couple of days and then she will give up on that idea altogether. The eggs will start to turn white and grow fungus on it. In some cases, she eats them up so you don’t have to do the cleanup. A fertilized egg looks brown in color.

If a female angelfish has a partner and they are done with their mating ritual, they will quickly find a place to lay their eggs. They will clean the place rigorously and then lay their eggs on a vertical piece of an item they find to be safe and secure for their fry.

They both will take turns to fertilize and hatch the eggs. They will also take turns in ‘fanning’ their fry. The fanning is supposed to provide the right amount of water current to the eggs so that the chances of spawning successfully increase.

After they are hatched a little and they observe their fry, they will hang them vertically till their offspring can swim independently.

What To Do With The Eggs – Hatched And Un-Hatched

A lone male angelfish wouldn’t pose such a problem. But if we have an egg-laying female fish, with or without a partner, we would have to be proactive about the decisions we take for the eggs.

If you have a single lady in the aquarium, dispose of the eggs when it’s done guarding and being protective over eggs. That would be the best time to clean it up. 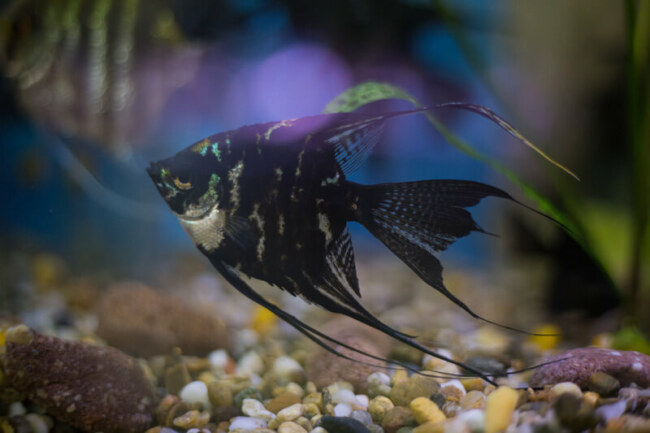 If you have a couple and you want to ensure that they bear offspring, then you would need to make sure you provide the right kind of environment for them. Make sure that fishes that can potentially gobble up their fry are kept away from them.

Also, a regular filter might be too powerful for them and suck them away. Get a sponge filter that will gently clean the aquarium without hurting any fry. They will become independent in about a week and you can switch to your regular filter.

We recommend checking out the Hygger Aquarium Double Sponge Filter for that!

A fry’s diet should have newly hatched brine shrimp and should be fed 3-4 times a day. After they become big enough, they can have regular fish food that you provide for the rest of your angelfishes in the tank.

Should You Get Them A Male Partner?

It is often recommended that you breed them in pairs since the beginning. Pairing them up in adulthood becomes difficult. They might bully their new partner and not accept it at all.

Some are willing to have a new partner. Some will ruthlessly send you a message that they need no man in their life (by killing the new partner).

It gets a little tricky to decide if they should get a partner. Angelfishes are quite adaptable to solitude and do not necessarily feel lonely. But the same cannot be said for all of them.

If they already had some experience in companionship, they might feel a little off without their partner.

Nevertheless, you will never know unless you introduce them to a new partner. Some will like one and dislike another, some will not like to be bothered at all. It is not a necessity to get them a partner unless you feel like it.