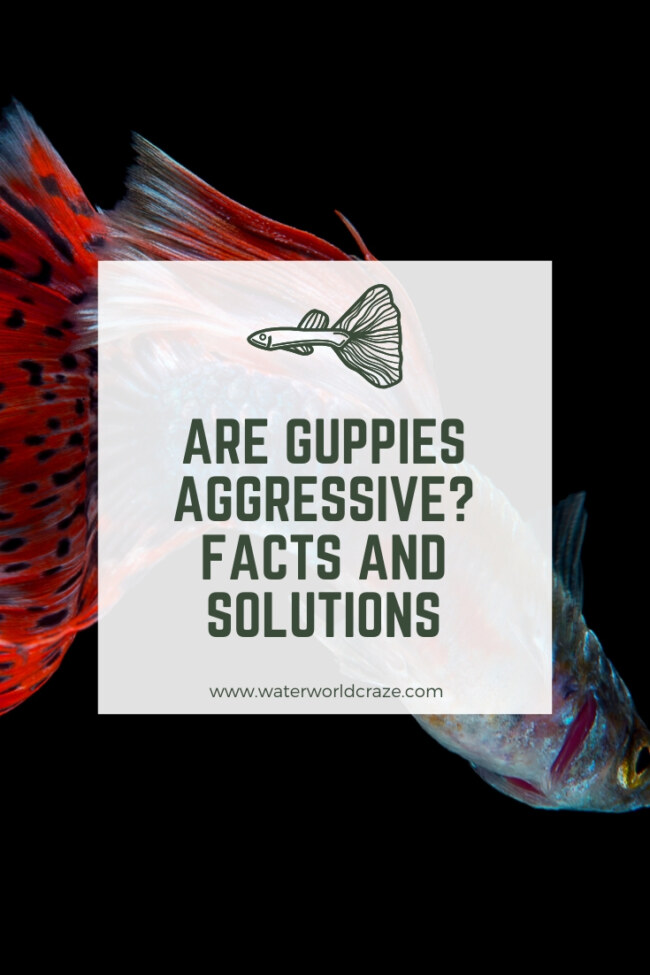 Guppies are beautiful dainty fish, but how well do they do with others?

Are guppies aggressive? Guppies are not viewed as an inherently aggressive fish. They live peacefully with those in their tank and their species. They are however playful with one another and might chase each other around the tank now and then.

If any of your guppies are acting aggressively with other fish or those of their same species then there are outlying factors that are contributing to your fish’s mood.

Sometimes aggression is harmless and just a period that your guppy is going through. Other times it is because there is an issue that isn’t being addressed so all they feel they can do is act out.

Below are details on the guppy’s personality, why and when they act aggressively, and what to do about it.

To understand what to look out for in aggression in a guppy it’s helpful to know the base level of the guppy’s personality. Owning a guppy isn’t like owning a shark, they are not a naturally territorial animal and do participate in foraging activity.

The guppy is a popular freshwater fish from South America. They come in a variety of patterns, colors, and fin shapes. The males being the more colorful, while the females are larger.

Guppies are a shoaling fish, with some varieties swimming in a schooling pattern so they do better when there is a group of their species.

They are a very easy going small fish that’s pretty. What more could you want as a new fish owner? They will live up to 2 years so they are not that long-lived, but they do have a rabbit-like reproductive cycle which will change their mood.

If you want to look into fish breeding then guppies are a great start for you. Just be careful with inbreeding which due to a large amount of fry is a possibility. Just plan your tanks well.

Guppies have a reputation for eating their young, which is well earned. They certainly will. In the wild guppies that are introduced in various environments tend to overpopulate the location.

Somehow through the process of selective breeding for stylistic choices guppies have lost their instinct for caring for their young. There are ways you can avoid this such as:

Guppies are not known to be aggressive fish. They are a very common fish for community tanks as well as singular species aquariums. If your fish is acting aggressively then it is an indication to you that something is wrong with them or the tank itself.

Just because the guppy is an agreeable fish doesn’t mean it doesn’t have specific needs that have to be met. Like with any fish the guppy has space requirements, environment needs, and will go through periods of breeding.

Accommodate those needs and be thoughtful with your actions and the guppy will be a beautiful addition to your tank. Ignore their needs and they will become lethargic and will fight those around them to obtain their needs.

Here are a couple of our articles that will help you with understanding guppies and providing the right environment for them: 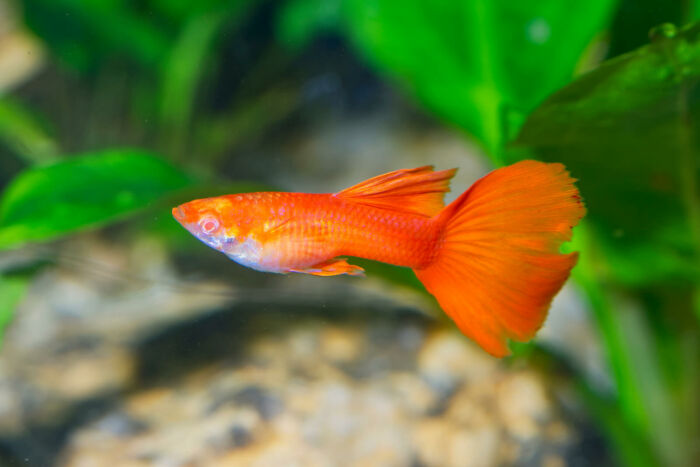 Fish, in general, have a natural aggression

In the dog world, which is the standard in which we set for all other breeds of animals, breeds are classified as aggressive and non-aggressive.

This is more complicated in the real world where breeds who are thought of bringing mean are nurturing while the safe dog bites you on the knee.

The fish world is even more complicated. We can tell you all day that this fish or that fish is aggressive or not. But every fish will become more aggressive under the right circumstances.

If you have ever watched the ocean or water nature documentaries you know that life in the sea is rarely serene. Each fish is fighting for a food source from other fish and it is the big guy that wins.

Guppies are a common fish, but if you have any other fish that are smaller than the guppy they will get picked on sometimes even eaten.

This particular behavior does not mean that the guppy is a naturally aggressive fish, this is just standard fish behavior. Anything smaller than them looks like food and they will eat it.

In a community tank type of environment, the guppy is the one that is most likely to be bullied instead of the other way around. They are a smaller fish so they are ample prey to those who are larger and more aggressive in the tank.

When you are stocking your community tank think about the type of fish that will do well with the guppy. Nothing too large. The guppy typical grows up to 2.5 inches with some varieties getting as large as 3.5.

Choose fish that are near this size. Some fish tend to be more aggressive than others so avoid any that are known to be fighters like the Angelfish. Also, avoid what is called nibblers.

These are fish that have a habit of taking a bite out of other fish’s fins, such as Tiger Barbs.

Some good varieties to go with for guppy tank mates are:

Guppies also do well with bottom feeders. Another method owners have used to stock their tank is to add feeder fish. Feeder fish are types of aquatic animals that are feed to larger fish.

Animals such as shrimp, snails, and smaller frogs work well in a guppy tank. Just check their size and what they typically eat before adding them.

We show you 12 bottom-dwelling fish that do well with guppies in this article!

If you have a tank that only has guppies in it don’t worry if they start fighting each other. The dudes especially will put on power plays to show off in front of the other guppies. Mostly a lot of tail slapping.

Think of it as play. The video below shows a variation of what we mean.

Keep plenty of hiding places in your tanks like plants or even caves. When one of the guppies is acting like king of the castle your other fish can just hide out until the dude calms down.

If you notice that the fights are getting a little too aggressive to the point where you think they can hurt each other then keep a breeding tank to separate them.

When the guys aren’t fighting it out the mating ritual of guppies might deceive the owner that their fish are fighting. Guppies chase each other during breeding. If you see the smaller more colorful fish chase the larger duller fish then they are just flirting with each.

Even after mating is over with male guppies will nip at pregnant female guppies. If it is just tail hitting or nothing serious it’s ok to keep them in the same tank together. However, it can get intense if you have a lot of male guppies and they are exhibiting the same behavior.

Just as a precaution keep a breeding tank to separate the female guppy from the male. If the male fish become aggressive enough the female guppy could lose her fry – we explain more on that here!

There is no set time or season for guppy breeding and it happens throughout the year. It’s easier to tell if the female guppy is pregnant after about two weeks. Two dots will appear on her bottom half, after a while the female guppy’s weight will increase.

It’s harder to tell if they are mating because guppies naturally chase each other around, but the male guppy will attack the female guppies with a tube on their belly.

Guy guppies can be a bit much with their flirtations and exhaust the female guppy. When stacking a tank give your female guppies a break and don’t over the number the males to females.

The dudes might be more colorful, but they can tire out your female guppies to death. If your male guppies are even chasing your pregnant female guppies all day long, we highly recommend reading our article on that here.

The best way to combat guppy mating aggression is to stack your aquarium in a way that will prevent that to happen. The guppy is a naturally shoaling fish, with the fry using traveling in a school.

So they do need to be raised in a group. When purchasing guppies keep it at a male to female ratio of 1:2. The smallest group of guppies that you can keep is 3 so for this pairing purchase two female guppies and one male.

The male guppies are more colorful and have a higher variety of patterns, but it helps your female guppies’ sanity in the long run. Before you think that you can just get only males they need female companions to live a happy life.

The world outside isn’t deficit from females and the tank should reflect the world that they naturally live in. If you are thinking about keeping only male guppies, you should read our article on that here.

In the rare cases that your guppies are acting aggressively, there is always a reason why. Either there is something wrong with their environment or they are going through changes such as breeding above.

This is a clue to you as an owner to investigate. First, check to see if there is any breeding activity. Watch the male guppies and how they interact with the female guppies. Ask yourself these questions.

These questions will help you determine if your guppy’s grumpiness is due to breeding and pregnancy. This is the most common reason guppies display aggression.

To learn more about guppy mating and have they typically treat each other read the section above. If you have alleviated this reason then there is something wrong in the environment around them. 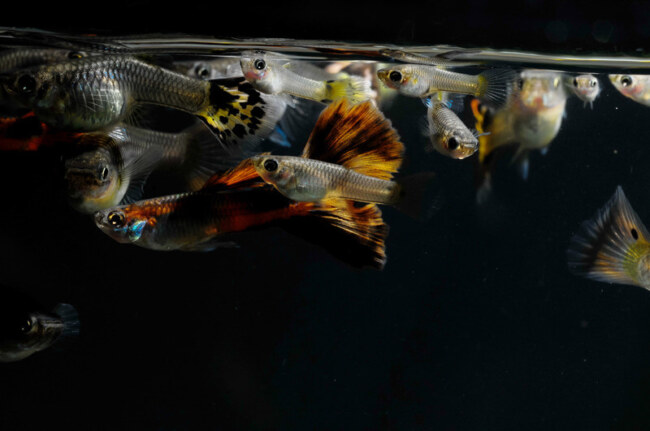 Whether you have a community tank or one just for guppies don’t overcrowd your tank with fish. Fish like their area and they have less of an opportunity to get that in an aquarium.

If you get a little fish happy and put a lot of different types of fish in a tank then they will start fighting each other for space. Guppies will fight those who are smaller than they are.

Guppies also need places to hide if one of their members is going on a territorial streak.

The guppy is not a large fish by any means, the most they will get up to is 2.5 inches. So tank size is easier than say a jumbo koi. Each guppy needs a gallon of space.

They are also a group fish and should never be kept on their own. You need at least 3 guppies in a group.

In this article, we show you the dangers of keeping guppies in a tank that is too small. We highly recommend reading it before overcrowding your tank!

The guppy is a group fish and does better when there are plenty of others of their species with them. The bare minimum number of guppies that you need is 3, more being better.

The environment in the tank

Though the guppy can be found in any type of water than you can think of they generally go for ponds and slow-moving streams.

They are typically found in freshwater ponds, but unlike typical freshwater fish, they can handle saltwater well so they can be included in marine tanks. Check the flow of your filter to make sure it isn’t preventing your guppy from moving around properly.

Guppies are a popular fish for a reason. They are small enough to own in a smaller tank, come in a variety of colors and fin shapes, and they have a peaceful personality that is perfect for pros and new fish owners alike.

Paying close attention to your fish will give you clues that something isn’t right when they display unusual behavior. If you keep them happy