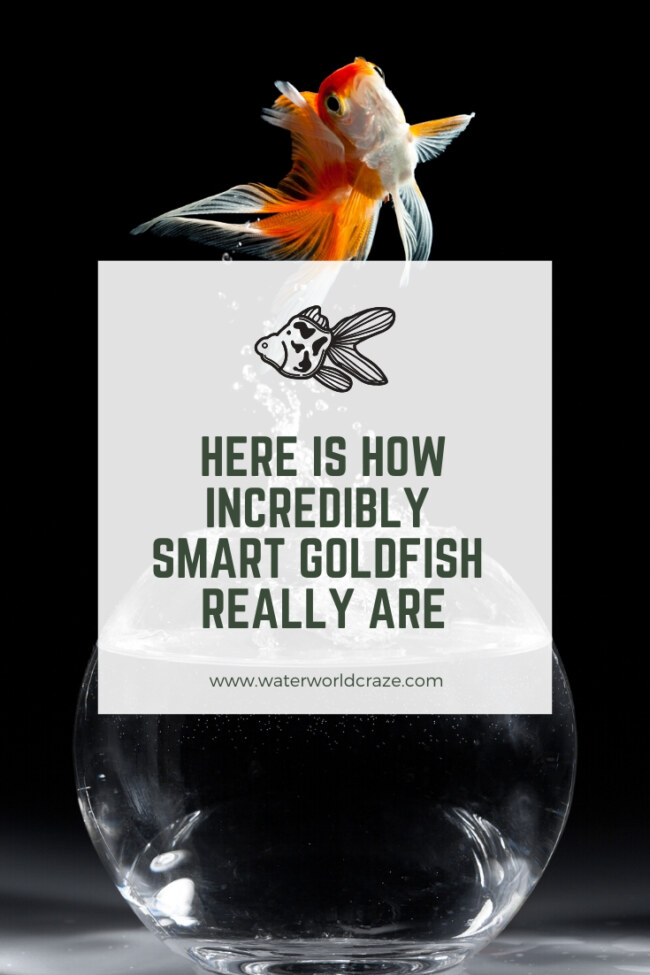 How smart is your goldfish? They are smarter than most people believe, but in comparison to other fish, they have a lower IQ level.

Most people think that goldfish only have a three-second memory, much like Dory on the beloved Disney movie, Finding Nemo. This isn’t the case. Studies have shown that your fish have longer memories than you think. In fact, it’s even possible to train your pets some simple tricks.

How smart are my goldfish?

Studies have shown that goldfish have an IQ of about 30 – 40. In a human, we wouldn’t really consider that to be a sign of intelligence, but they are far ahead of the low bar we humans have set for them.

In fact, they have, in some cases, shown more intelligence than some warm-blooded animals.

Goldfish are a member of the carp family, which also includes koi. Fish in the carp family have shown that they have memories at least three months long. In some cases, studies have suggested their long term memory is twice the length.

Your goldfish can recognize you (we have created an entire article on that – read it here!), respond to music cues and can see the same spectrum of color that humans can. Even young goldfish have a harder time seeing the color blue, much like human babies.

Goldfish have also been trained by scientists and young enthusiasts alike to do different things such as:

So the next time someone says, “Oh, you just have fish,” you can tell them that you can train them to do tricks just like you can train your dog.

How do you measure the intelligence of a goldfish?

When we think of intelligent animals we think of sentient animals, like dogs or cats. It’s easy to imagine a stream of consciousness for your dog and even give him a voice. Goldfish don’t exactly give the impression that they have any thoughts. We tend to think they only have instincts.

Part of being sentient is having a sense of “self” and some level of emotions. Through many studies goldfish have been found to have a level of fear, this is an emotion that shows a level of memory and cognition.

This means that the fish is smart enough to remember when something may cause pain or a bad experience.

Fish can also feel pain, discomfort and their moods can change depending on the conditions of their aquarium, showing they have a recognition of well-being.

In 2019, a fish called the cleaner wrasse passed a test called the Mirror Test. This fish showed that it recognized itself in a mirror. Scientists placed a colored mark on the fish and the fish tried to scrape it off.

This showed that the fish understood that the mark is not supposed to be there. It didn’t react the same to a transparent mark, or if the mark was on the mirror. The fish could also tell if there was a different fish across from it, and didn’t attempt to remove the mark.

This means your goldfish could have an understanding of its basic self. How cool is that?

Goldfish are used in scientific studies

Because Goldfish can be trained, they are used widely in scientific studies around the world. In fact, they are second only to mice.

Scientists have used goldfish to try to understand memory and learning. Some of the studies have included running the fish through mazes and measuring their ability to remember their environment, which they can do well.

Others have included studies with music to see how the fish react to different sounds. Scientists found that goldfish will react to jazz and classical music. So if you want your pets to have a good day while you’re at work, leave some Bach running for them.

Goldfish have also shown their ability to differentiate between colors. When fed with their food around a red leggo, they learn that color means they are getting fed. Later on, they will respond quickly to that color looking for food.

With the newer studies emerging, showing that fish are sentient, it’s possible that there may be a change in laws regarding fish. They may even be offered some of the same protections that other pets, like cats, might get.

How can I train my fish?

Like most animals, goldfish are mostly motivated by food. So if you’re expecting to train your fish, you will have to be patient because you don’t want to overfeed them. Goldfish can and will eat to the point of death if the food is made readily available.

Also, don’t expect your goldfish to have a large number of tricks up their sleeves. While their memory is better than originally thought, they can only remember so much.

The fish with the record number of tricks is in the Guinness Book of World Records for remembering ten different tricks.

These fish are trained regularly and unless you have lots of extra time, you may find it difficult to get your fish to that point. If possible, do the training at the same time of day.

This will help your fish develop a routine that they will eventually remember. Once you get that down pat you can show your pet off to your friends.

There are some basic things you will need to do if you want to train your fish. The first is familiarizing them with yourself. Try to interact with them on a daily basis and, if you can, have them eat out of your fingers. This will take time.

Here are some more tips to help you along with the training:

Positive reinforcement is the best way to train your fish. Reward them for behaviors that you want by giving them treats.

Use a special tool to feed your fish. They will eventually come to associate that tool with food. Aquarium Tweezers like these will do the trick.

Use the same method over and over again

Give your fish some sort of indication that the food is coming. You may have to tap on the glass or have a specific piece of lego that you put in the tank. This will let your fish know to look for food.

Be consistent in your training. Fish may have longer memories than most believe, but they need to have the same actions reinforced repeatedly so it’s ingrained in their long term memory. You will need to start by familiarizing them with your tweezers and your finger tap.

Make sure your fish are happy and healthy. If your goldfish are bored, overcrowded or ill they will be less likely to participate or cooperate with you.

Many people love the idea of keeping goldfish in a bowl. Most of the time, a bowl is not an optimal tank for goldfish.

If you still want to keep your goldfish in a bowl, we have some outlines you should follow to make it work and to show you how much work it will be. Read more about that here!

For some ideas of tricks, you can teach your goldfish, watch the video below.

What tools do I need to train my fish?

The most important tool you will need will be food. Pick food that can easily be given in small amounts. This is how you’ll motivate your little one to do what you want.

You may also need some kind of feeding device unless you plan to just use your fingers. Aquarium tweezers will work, but you can also try other things like feeding tongs or feeding clips. They just need to be long enough to get down to the bottom of the tank so you can guide your fish.

Other things to consider are: