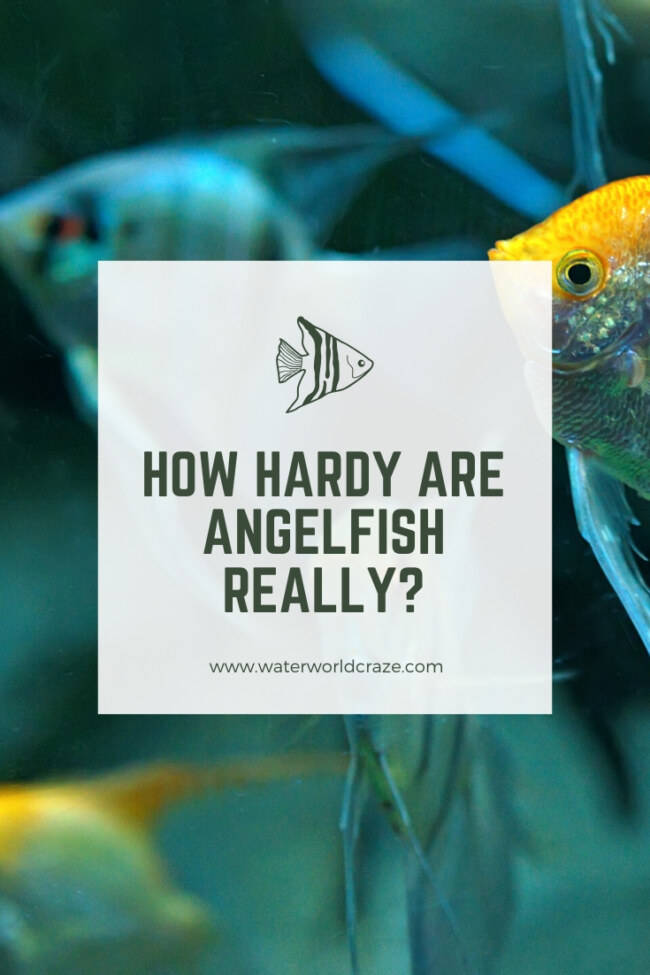 Angelfish are one of the most popular species of pet fish nowadays. Although they can be temperamental, they look great and they’re somewhat easy to keep, which is why many aquarists are looking into getting them.

But are angelfish hardy or do you easily risk endangering their health? Fortunately, angelfish are quite hardy and they can put up with a lot of variations, whether in terms of water conditions, tanks, or different types of food.

However, as you can imagine, there are things that can make them less hardy in the long run. Let’s have a look at some of them and how you can make sure that your angelfish live a long and happy life.

What Are The Hardiest Types of Angelfish?

There are many types of angels out there, and many people who are into pet fish will surely try several species before settling on one. We’ve gone through a lot of information on the topic and from what we’ve gathered, it seems that Marble angelfish are the toughest of all the species.

Zebra and gold angels can be included in the same category, which means that they will require less effort on the part of the fish keeper.

On the other hand, some of the rarest and most challenging types of angelfish out there are Altum (sometimes called deep angelfish) and Leopoldi.

Although captive-bred varieties from these last two can be available, they are quite rare and they’re also less popular since they require more care.

Some fish keepers have noticed that smaller species seem to be less tough compared to adults. This is also due to the adults’ tendency to eat the young if they aren’t fed enough or if they have aggressive behavior or feel stressed in the tank.

What Can Make Angelfish Less Hardy?

Probably the most important factor in keeping hardy angelfish is their water condition. We couldn’t help noticing that most forums where fish keepers gather and discuss are packed with information suggesting that pristine water is the most important requirement when keeping angels.

Even though it’s true that angelfish aren’t as picky or demanding as many other species, and they don’t even need all the water in the tank replaced weekly, they do require a bit of care and maintenance.

If you want your fish to remain healthy and live for as many as five to ten years (which, by the way, is their average life span), you should make sure that you remove at least a third to a half of the tank water every week.

There are other mistakes that you can make when keeping angelfish. A quite important one is getting more angelfish and not keeping them in quarantine first. If you don’t do this, you might jeopardize the health and life of the angelfish that you’ve had for a while.

When you get your fish from a breeder who keeps them in a large colony, the likelihood of you getting an infected individual can be quite high.

Although the disease might not be visible, the quarantine might reveal it and give you time to treat it before you introduce the new angelfish into your bigger tank.

As for care, angelfish need good water movement, subdued lighting, as well as effective filtration. They can be hefty eaters, so you need to make sure that there’s as little food waste in your aquarium as possible.

As such, you might want to get the best filter that you can afford. Also, the pH of the water should be in the range of 6.8 to 7.8 and the temperature that we recommend is 80 degrees F.

Here are some of our articles we recommend you to read if you want to make sure that your angelfish stay healthy: 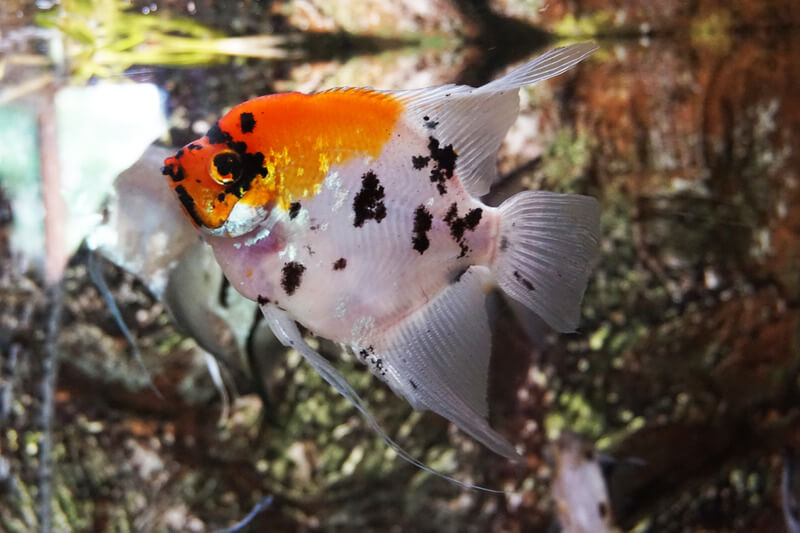 What to Feed Angelfish so That They Are Hardy And Healthy

Unlike other species, angelfish are omnivorous. You can give them both frozen and live food. Ideally, your angelfish should receive a balanced diet containing meaty and dry meal. High-quality flakes, glass worms, brine shrimp, and blood worms should be a part of their diet, as well.

You can feed angelfish up to three times a day, but make sure that you wait for them to finish eating before giving them more food. Ideally, you should only feed them for a couple of minutes at a time.

If you feed them a large meal and they don’t consume it all, this will negatively impact your tank environment and make the water dirty.

As weird as it might seem, taking too good care of your angelfish can cause a problem, too. Cichlids are known for being greedy, which means that they can sometimes eat in excess.

This also means that they might get fat since they tend to gorge too much. Believe it or not, if they get overweight, they can even die.

While they are still young, you should feed them 50/50 brand food and live food. The second gets them overly excited and they tend to eat too much of it, especially when they grow older.

As they reach adulthood, you should decrease the number of worms you give to them, and only keep them as rare treats. This will prevent them from becoming obese, since they’re less inclined to eat immense amounts of flakes, for example.

Incompatibility with Other Fish Can Affect Their Health

Most angelfish are peaceful, but they are cichlids, which means that they can be aggressive towards each other or towards other species. The truth is that they are actually opportunistic.

Natural selection is what governs their behavior. If they are kept in the same tank with smaller fish, even from the same species, they will try to attack them and even eat them.

If you make the mistake of adding a larger cichlid to a tank where you keep medium-sized angelfish, you’ll soon see that the addition is going to try to nibble the smaller ones’ fins.

Suitable companions for angelfish are rasboras, gouramis, and large tetras, as well as similarly sized catfish and angelfish. Ideally, you should avoid adding other angelfish to a tank in which you already keep several.

Angelfish are known for creating bonds with each other, and the new one will have a hard time adapting to the conditions and might either be ignored or attacked by the others.

In the end, what matters most is keeping your angelfish as healthy as possible. We hope that our post has shed some light on the things that you need to do to achieve that. As a final note, we’d like to ask you to avoid overestimating their hardiness.

They are sensitive to living environment changes as much as any other fish.