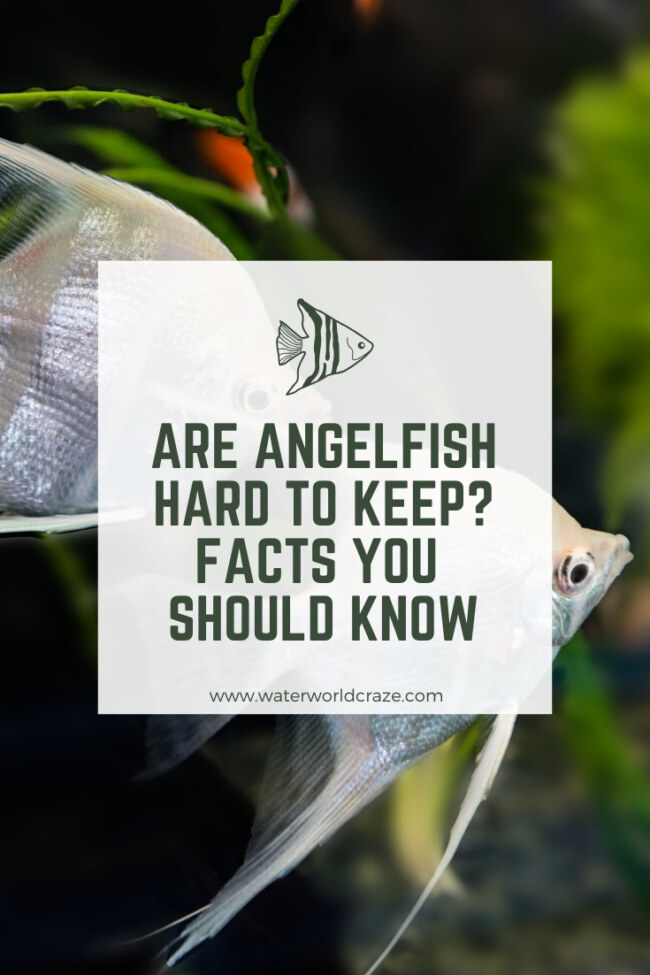 Angelfish make stunning additions to sizable community aquariums. However, as you might know, the most beautiful fish are often times very hard to keep. So the question is, how hard is keeping angelfish really?

For an experienced fish keeper, they are quite easy to care for. However, as with any other fish species, there are some caveats. They don’t react well to inconsistent or wide variations in water chemistry.

Even though they are not extremely active swimmers, they do need a fairly decent amount of space in the tank. They have a somewhat large size, which means that they require a tank with great depth.

There are many factors you need to keep in mind when getting angelfish. Continue to read to learn what makes keeping angelfish hard for most people and what you need to do to keep happy and healthy angelfish!

1. What Makes Angelfish Hard To Keep?

Both their requirements in terms of tank size and food can make them a little more challenging to care for compared to other popular aquarium fish species. They also have several health problems that they can suffer from, and these can affect the other species that live in the same tank.

If an angelfish has been infected with this virus, it will show a considerable lack of energy, it will swim unnaturally with the fins kept close to the body, and it will also produce an excess amount of slime on the surface of the body.

Some fish point their noses up and stop moving altogether.

Secondary infections can develop due to the fish’s inability to move. The infectious period of the disease lasts for about three weeks, but the majority of the angelfish don’t survive for more than several days.

This disease is spread either by placing an infected fish in the same tank or by placing a non-immune angelfish in a tank where there’s one that’s currently infected.

Hexamita is a parasitic disease that spreads throughout the body of the angelfish. The fish stops eating and starts producing white and stringy feces. Sometimes, it can spread to the head and along the fish’s lateral body lines, where it can produce large holes.

If the parasite spreads and reaches the internal organs, it will cause death.

In their natural habitat, angelfish aren’t normally affected by Hexamita. However, some fish experts believe that a lack of fresh plant material in the diet of angelfish, along with poor water conditions, could be two causes. 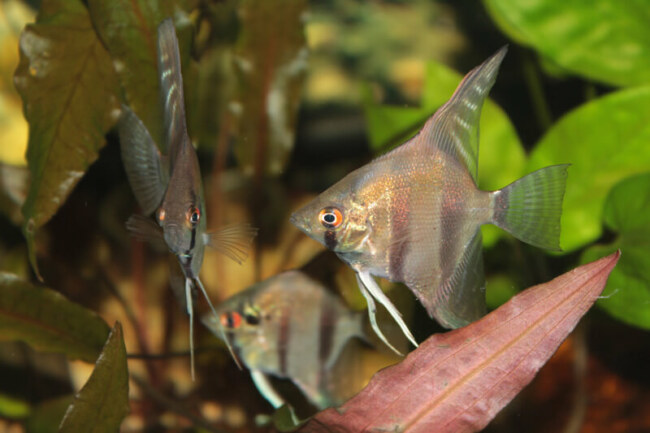 Also known as Gold Dust Disease, this is another parasitic medical condition.

If an angelfish is affected by this disease, it can be coated in gold, green, or brown particles, breathe more rapidly than normal, exhibit less energy, eat less, as well as rub itself against objects or decorative plants in the tank.

Some fish might also produce higher amounts of slime and could keep their fins at their sides. The parasites can effectively burst from the skin of the angelfish, which means that they create the perfect entryway for bacteria and other germs present in the tank.

Angelfish can get infected with the parasite if an infected fish was placed in the aquarium, if the tank substrate contains it or if some aspects regarding the aquarium setting for angelfish have been compromised.

The health of angelfish isn’t affected by the three diseases that we have described above. Some of the other things that can harm them are Ich, mouth fungus, flukes, anchor worms, Popeye, as well as dropsy.

Compared to other difficult cichlids, angelfish are more or less beginner-friendly. If you don’t feel ready for a saltwater tank, you can choose freshwater angelfish as they are perhaps easier to care for.

The most important aspect of keeping healthy angelfish is making sure that they have the right living conditions, the correct food, as well as the right companions. As we have noted in the section above, they can be sensitive to a variety of infectious agents.

Ideally, you should carefully inspect the food that you intend to give to your fish. Wild-caught prey is a no-go, in this case, as it could contain parasites or other microorganisms that could affect the angelfish’s health.

If you plan on adding a new fish to your community tank, make sure that you quarantine it for a minimum of two to four weeks. This will allow you to observe it and see whether it’s healthy.

3. How Picky Are They When It Comes To Food?

By nature, freshwater angelfish are omnivorous. They do tend to prefer a meat-based diet, though. In the wild, they feed on aquatic invertebrates and small crustaceans, but in a home aquarium, they accept a broad array of foods.

You can offer your angelfish a diet composed of pellets and cichlid flakes. You could supplement it with live foods, as well as freeze-dried or frozen foods. Generally, angelfish enjoy brine shrimp, bloodworms, white worms, as well as other crustaceans and even small insects.

Since they are omnivorous, they can also benefit from the addition of plant matter to their diet, such as fresh vegetables or algae wafers. Frozen and live foods can be fed either as treats or to induce spawning.

Ideally, you should rotate their diet on a day-to-day basis and only feed what they can consume over several minutes 2 to 4 times a day.

The rest of the food that they might not eat will affect the quality of the water over time, so there’s no point in feeding them extra if you notice that they have no appetite. 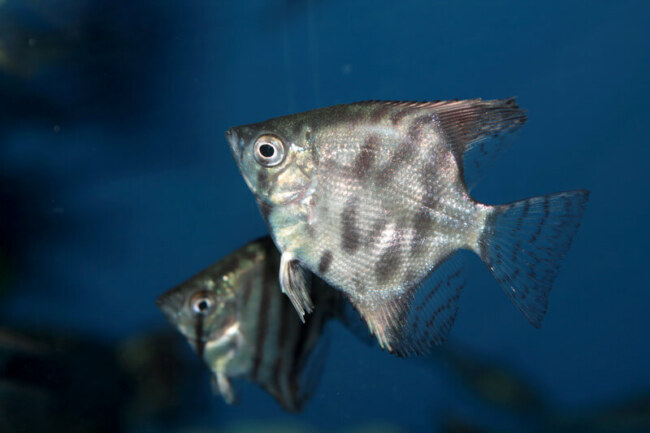 4. How To Ensure The Right Living Conditions For Your Angelfish

A 20-gallon high tank would be the minimum size required, but a 29-gallon one would be even better. This size is the correct one if you intend to grow a group of six to eight juveniles. If you can afford it and you have enough space in your home, try getting a 55 to 75-gallon tank.

Tall aquariums are the best when it comes to accommodating the body shape of angelfish. But how can you know just what size is suited for the number and exact breed of angelfish that you own?

To make it easier for you to find out, we’ve put together a table that you can check out below.

If you’ve purchased a tank from a thrift store or online and you don’t know its size, you can use a method to calculate the capacity that your angelfish need.

Some breeders think that 1 inch per gallon is not enough as this would lead to an overstocked tank and the potential for the fish to develop health problems.

To keep the water quality on par without having to perform any changes too frequently, you can utilize a 1 inch per 2 gallons rule. Keep in mind that angelfish are extremely sensitive to poor water quality, so having more space means having fresh water for a longer amount of time.

The recommended temperature range for angelfish is between 75 and 84 degrees Fahrenheit. If your tank is kept in a room below 75 °F, use an aquarium heater to increase the temperature.

The water should be slightly soft, with a hardness between 5 and 18 dH. Replace around 10 to 25% of the water once or twice a month and make sure to treat tap water using a conditioner before refilling the aquarium.

Freshwater angelfish are native to the Amazon River, which means that they prefer a somewhat acidic pH environment (between 6.0 and 7.5). They thrive in a densely planted setup.

Since angelfish are omnivorous, they can prey on smaller fish. They are opportunistic and eat almost anything they have in sight. They are usually peaceful, but they can be particularly territorial if they have developed a stable nuclear family.

There are species that can also stress the angelfish as they tend to dart incessantly about the tank. These are rasboras, danios, and rainbowfish, so you should avoid keeping angelfish in the same tank with them.

Tetras can be nippy with angelfish, as well, so they do not make the best choice of companions.

Some of the ideal companions are surface-dwelling hatchet fish and killies. If you have a tank larger than 75 gallons, you can choose a group of festivums, especially since they tend to live in the same environment in the wild as angelfish.

Other good bottom-dwelling companions are kribensis. Most catfish, loaches, mollies, dwarf gouramis, as well as oddballs, can be kept in the same tank, as is the case with African butterflyfish.

We have listed 12 bottom-dwelling fish that do quite well with angelfish in this article – read it here!

Try not to mix different angelfish species together as they might behave aggressively toward one another since they can compete for resources and territory.

Oscars and Convicts are a no-go with angelfish, and barbs should be avoided because they can harass freshwater angelfish to the point that they bite their trailing fins.

Extensive research is required if you have never had tropical fish before since as we have shown in this post, angelfish can suffer from diseases and have their own requirements in terms of tank size, water conditions, and diet.